Large-scale exercises in the Mediterranean are meant both to increase capabilities in Syria and to send a message to NATO. 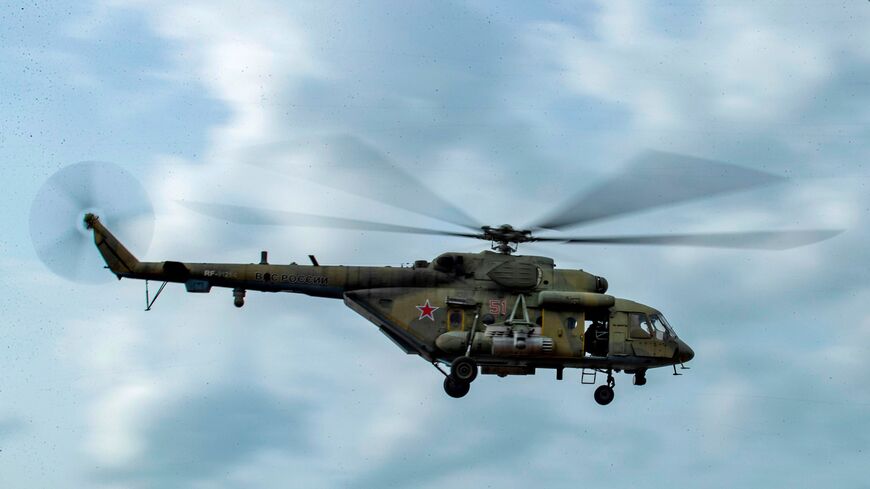 A Russian Mi-8 military helicopter flies over a joint Russian and Turkish convoy (not pictured) as it patrols in oil fields near the town of al-Qahtaniyah, in Syria's northeastern Hasakeh province, on Feb. 4, 2021. - DELIL SOULEIMAN/AFP via Getty Images

The Kremlin continues to put pressure on the West, demanding impossible security guarantees in Europe, building up troops near Ukraine and conducting military exercises one after another. Syria is also involved in Putin's tactics, albeit indirectly.

Israel was concerned after Syrian and Russian military jets conducted a joint patrol on Jan. 24 along Syria's airspace, including the Golan Heights area, Ynet reported. Now the IDF is trying to find out from their Russian colleagues why they wanted to organize patrols along the southern borders of Syria. The first interpretation is that the Russian side is trying to influence the activity of Israeli airstrikes on targets in Syria. The second interpretation is that amid tensions over Ukraine, Moscow is sending a signal to NATO that their military capabilities include the Middle East.

The Russian military also organized patrols on the ground in these weeks. In particular, the command of the Russian Hmeimim airbase in Syria began conducting round-the-clock raids at the sea port of Latakia due to the threat of terrorist attacks. According to the head of the Russian military's Reconciliation Center in Syria, Rear Adm. Oleg Zhuravlev, the initiative was related to an appeal by Damascus and its intelligence services. On Jan. 15, Russian officers also conducted exercises with an air defense unit of the Syrian regime forces.

Of course, the Russian military understands that Israel will perceive the activity near its borders as a signal, but on the other hand, Moscow is also solving practical tasks.

First, on Dec. 1, Russia began the winter training period for its own troops. Maneuvers involving Russian military and Syrian regime army units take place in different provinces of Syria, including the north of the country.

Second, the Ministry of Defense's formal explanation about organizing ground patrols to prevent terrorist attacks still looks more realistic. Despite the cessation of active fighting, Assad's security services periodically fail to prevent terrorist attacks and sabotage even in the center of Damascus. Meanwhile, Baniyas, located between Tartus and Latakia, is still considered a center of civilian smuggling. The movement of cargo, including the transit of drugs, is carried out under the cover of the Syrian mukhabarat, and it is unlikely that the Russian military will check the bills of lading.

Third, the joint demonstration flight was a stage in the work to restore the combat effectiveness of the Syrian Air Force. The air patrol route was not only near Golan Heights, but also over northern Syria, including the Euphrates River. The Russian planes took off from the Hmeimim airbase, while the Syrians used Seikal and Dumayr airfields.

Moreover, the Russian military likely did not come up with joint air patrol exercises just to prevent Israel from striking again at the Iranian proxy forces. After all, Moscow has repeatedly allowed Iranian planes to land in Hmeimim and unload cargoes of unknown destination.

However, Russia is also trying to send clear signals to the U.S. and allies. On January 20, the Defense Ministry of Russia announced  naval exercises involving more than 140 ships in all the zones of responsibility of the fleets. This means that by February almost all combat-ready ships, submarines, boats, and support vessels will be simultaneously and synchronously withdrawn to training ranges in the Mediterranean, North Sea, Sea of Okhotsk, Northeast Atlantic, and Pacific Ocean.

In the near future, the Kremlin will concentrate an unprecedentedly large force in the Mediterranean Sea. So, the Russian squadron, based in the Syrian port of Tartus and consisting of 10 ships, will be joined by two more large detachments of warships. Six large landing ships are going across the English Channel and the Strait of Gibraltar to the Mediterranean. And the Pacific guards missile cruiser Varyag, the large anti-submarine ship Admiral Tributs and the large sea tanker Boris Butoma, which recently took part in the third joint exercises with China and Iran in the Gulf of Oman, are heading toward Syria through the Red Sea and Suez.

In all post-Soviet history, Russia has not held an exercise with such a scale. It seems Moscow is using the classic method of escalation in negotiations, which implies a demanding (maximalist) position and a number of spare (compromise) positions. In reality, however, it is not clear what kind of compromise the Kremlin really needs: after the annexation of Crimea in 2014, attempts by Russian authorities to present themselves as a besieged fortress are illogical.