Hamas is producing a new series that will air during the month of Ramadan, with the aim to debunk the Israeli narrative of events in the Gaza Strip. 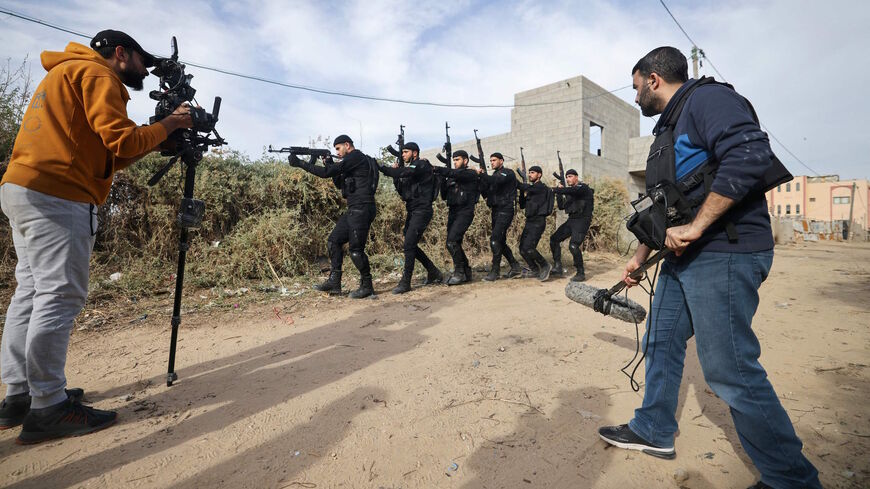 Palestinian actors and crew shoot a scene of the series by local Al-Aqsa TV "Qabdat al-Ahrar," meaning "Fist of the Free" in Arabic, in Gaza city on Dec. 6, 2021. - MAHMUD HAMS/AFP via Getty Images

RAMALLAH, West Bank — The Gaza Strip will be on the Arab drama scene during Ramadan this year in the Hamas-backed “Qabdat al-Ahrar” ("Fist of the Free") series, which will air on more than 15 Palestinian and Arab satellite channels in April and May.

The 30-episode series starring a group of actors from the Gaza Strip has been in the works for around a year. Each episode lasts 40 minutes and aims to highlight the Palestinian narrative as opposed to the Israeli one and show the intelligence battle between the resistance factions in the Gaza Strip and Israel.

The series portrays the intelligence and informational expertise of the resistance, which outdoes the schemes of the Israeli security apparatus by highlighting a major intelligence event — namely, the infiltration of an Israeli cell sent to the Gaza Strip to abduct a prominent resistance leader, Saadi al-Attar, executive producer of the series, told Al-Monitor.

“The Israeli cell successfully abducts the leader, but it fails to leave the Gaza Strip after being exposed by the resistance. The latter then pursues the cell, eliminates it and liberates the abducted person. This is one of the plots in the series showing the mind war between the resistance and Israel and the resistance’s advanced expertise in intelligence and military plans through several real-life examples,” Attar said.

He added, “The main plots also include the Israeli security services’ attempt to prevent the entry of advanced technology and weapons into Gaza. Despite its attempts, the resistance manages through its intelligence work to get these weapons and uses them in one of the confrontations that enables the resistance to wage a huge military attack.”

The main plot of the series — namely, the infiltration of the Israeli cell into Gaza — appears to be inspired by the failure of the Sayeret Matkal unit of the Israeli Military Intelligence Directorate to plant advanced spying devices on Izz ad-Din al-Qassam Brigades’ (Hamas’ military wing) communications network on Nov. 11, 2018.

In a recent interview with the digital newspaper Maariv on Jan. 22, former Chief of Staff of the Israeli Defense Forces Gadi Eisenkot described the operation in Gaza as his “biggest failure” during his tenure.

The head of Hamas’ artistic production department, Muhammad al-Thuraya, told Al-Monitor that the story of the series is based on true events that took place in the Gaza Strip, including — for example — the failed Sayeret Matkal operation in Khan Yunis.

The purpose of the series is to highlight the Palestinian narrative and refute the Israeli one, whether in the media or in artistic productions supported by Israel, like "Fauda," he added.

Thuraya continued, “The new series is a continuation of a series of drama productions over the past decade that depict the Palestinian reality, such as “The Spirit,” “The Gate of Heaven” and “Fedaei.”

He added that the series “reflects the resilience of the [people] of Gaza and their support for the resistance in time of war, Palestinian cyber capacities to hack Israeli computers, prisoners’ casefiles and how the resistance deals with Israeli soldiers according to Islamic Sharia, as opposed to how Israel treats Palestinian prisoners in its jails.”

Thuraya said the series was filmed entirely in the Gaza Strip and stars a team of local actors. Many volunteers from outside Palestine contributed to its production. The series is scheduled to air during the holy month of Ramadan on more than 15 Palestinian and Arab satellite channels such as Al-Manar, Yarmouk, Palestine Today, Mekmelin and the Algerian Echourouk, he added.

“The series will also be available to any TV channel that wishes to show it, without any financial compensation. We offer our productions to satellite channels without any return,” Thuraya said. “The viewers following the series will reach the conclusion that the resistance in the Gaza Strip is useful and important, through the information presented, and they will realize its capacity to achieve victories.”

Thuraya said the production does not show the military wings of the factions; rather, it focuses on the resistance as a single Palestinian entity.

In view of the conditions that the Gaza Strip is experiencing as a result of the siege imposed on it since 2006 that has long prevented the introduction of modern cameras and necessary equipment, the production of this work was carried out with very simple camera tools, and it was one of the challenges facing the team.

“All scenes were filmed in Gaza with simple tools in light of the difficulties in obtaining photographic tools and equipment necessary for artistic production,” Thuraya said. “The challenges included the pushback from social media for the drama productions,” which sometimes hinders their promotion.

He said that YouTube recently deleted a special channel for the series "Bab Al-Samaa" after the number of views reached 30 million.

Attar said that cinema and drama in Gaza need advanced equipment to evolve, but unfortunately Israel prevents any equipment from entering Gaza. “There is a shortage of cameras, lenses, graphics and montage equipment.”

Meanwhile, the series also highlighted social life in the Gaza Strip, people's relationships with each other and daily life. Actor Camelia Abu Sammak  plays the role of a woman named Umm Tahseen who lives in one of the neighborhoods of the Gaza Strip. Tahseen spends her days watching the neighbors and stirring up trouble with her “gossip” and “chatter.” The Israeli intelligence takes advantage of her talkative character to gather information about the resistance.

Abu Sammak told Al-Monitor that the series "Qabdat Al-Ahrar" depicts the details of life in Gaza despite the focus on politics and resistance. However, the other aspects are not neglected, as they are part of the work of politics and resistance, she said, adding that the series represents a significant addition to drama productions in Gaza with the level of the performance of the actors, the plot, the filming, the script and the information.