Islamist groups in the Gaza Strip argue that films should reflect the realities of the Israeli occupation. 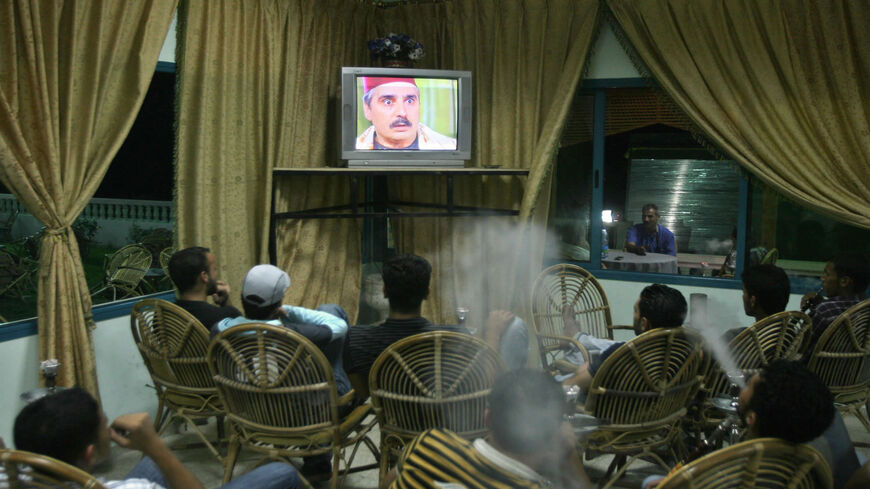 GAZA CITY, Gaza Strip — The armed factions in the Palestinian territories are the parties that are in charge of producing TV series in the Gaza Strip, which are in general of poor quality amid a lack of funding. Despite this, they insist on being present in the TV scene during the Muslim holy month of Ramadan, during which Arab series compete for audiences and viewer ratings.

These productions have now become limited to pro-resistance drama. Producers claim that this is the Palestinian reality and they need to present it to the world through arts, which is nothing but a representation of the people's lives.

The Islamist Hamas movement began producing pro-resistance drama series more than four years ago. It has focused in its series on the resistance against Israel. The latest example is “Qabdat al-Ahrar” ("Fist of the Free") series, which is currently being broadcast on its media platforms and TV channels that are close to its political orientation.

The head of Hamas’ artistic production department, Muhammad al-Thuraya, told Al-Monitor that the series speaks of the psychological warfare and technological tactics used by the Palestinian resistance in the face of the Israeli forces, specifically the Israeli Sayeret Matkal unit that infiltrated into the Gaza Strip in 2018. Back then, the armed factions foiled the infiltration attempt with a firefight that wounded a number of the unit’s members before escaping to Israel.

The series also showcases military facts about the Palestinian armed factions during the latest Israeli aggression on the Gaza Strip, in May 2021, he added.

Thuraya said that the reason why the series is aired during Ramadan is that the Arab TV audiences increase during this month. Ramadan is considered a month of victory and resistance in Islam, making it necessary to promote the idea of the Palestinian people’s resistance and steadfastness, he added.

Commenting on the hurdles of the series’ production, he said the equipment they use is at least a decade old. It is difficult to buy new equipment due to high prices or unavailability in the local market. He also pointed to the actors’ poor experience, which forces them to repeat the scene several times.

Thuraya noted that 400,000 people watched the series’ episodes that have aired so far on six local and Arab channels. He said that the pro-resistance drama produced in Gaza has faced promotion difficulties, as on a daily basis YouTube and Facebook delete about 10 pages on which the series’ episodes are posted. He added, “These companies consider that this production incites violence against Israel.”

He said that the leading actor was paid less than $3,000 because of the limited budget Hamas allocates for arts production.

Thuraya added that the focus on pro-resistance drama aims to show that Israel is behind all of the social, economic and human sufferings of the Palestinian people.

Islamic Jihad’s TV channel Al-Quds al-Youm produced for Ramadan a series titled “Sharat al-Nasr” ("Badge of Victory"), which tells the story of the six prisoners who escaped from the Israeli Gilboa prison in 2021.

The series is the Islamic Jihad’s second pro-resistance production. The first one was “Milad al-Fajr” ("Birth at Dawn"), whose first season aired in 2021. It depicts the story of a prison break of Islamic Jihad’s inmates from Gaza’s central prison during the Israeli occupation of the Gaza Strip.

Hossam Abu Dan, director of "Sharat al-Nasr," told Al-Monitor that they contacted the prisoners who escaped last year through the prisoners’ institutions and lawyers, to obtain information and include them in the series, particularly on how they dug the tunnel, escaped and roamed outside the prison walls until they were rearrested, as well as the difficult circumstances in the prison.

He said, “The world needs to hear the true Palestinian narrative about the prisoners’ jailbreak in a humanitarian way as part of the drama, and away from the Israeli media that keeps lots of information undisclosed.”

Abu Dan explained that the series is aired on 15 local Islamic and Arab satellite channels, in addition to social media, stressing that the channels are only broadcasting the series without purchasing it from the production company. He continued, “Our goal is to promote the Palestinian cause, not to obtain money.”

He noted that more than 500,000 people have been watching the series, pointing out that YouTube banned episode four under the pretext that the series belongs to a terrorist organization. He explained that the series’ main plot is included in episode four.

He noted that season two of "Milad al-Fajr" was supposed to be produced, but the prisoner's jailbreak issue last year prompted them to postpone it until Ramadan next year.

Commenting on the techniques used in the production of the series, Abu Dan stressed that there is a huge lack of capabilities in Gaza, in terms of equipment and technical staff, but that they are trying to overcome this problem as much as possible. “There is no media production city in Gaza that would facilitate the filming of scenes. That is why we sometimes have to film in the citizens’ homes,” he added.

Mohammed Sawwaf, CEO of the Gaza-based Alef Multimedia production company, told Al-Monitor that the pro-resistance drama began developing four years ago in the Gaza Strip. He noted that the key hurdles include financial support and difficulty in promoting drama series, as it is only aired on local or pro-resistance Arab channels.

He said, “Limiting drama production to the factions prevents these productions from reaching new audiences. Sometimes a certain point of view is being imposed during production, according to those who are funding it.”

Sawwaf pointed to the poor scriptwriting of the pro-resistance drama productions, which makes the plot weak, as well as the technical staff’s poor capabilities. In addition, he said, there are no full-time actors in Gaza, where there is a lack of specialized institutes.

He considered the pro-resistance drama as a lab to sharpen Palestinian arts skills in future productions and explained that it is a way to mobilize the international community and bring sympathy and support to the Palestinian resistance. He noted that the series is making it seem that 90% of Palestinians carry a weapon, which is a mistake producers need to review.

Commenting on the coordination between production companies of pro-resistance drama, he stressed that each party wants to present its orientation and its fighters’ success story. He added that the Islamic Jihad’s production focused on the escape of its prisoners from Gilboa prison because the inmates are affiliated with it, while Hamas’ production focused on the failed Israeli operation because those who stopped Sayeret Matkal belonged to Hamas.

He concluded, “Viewer ratings of the pro-resistance drama in the Arab world is higher than the rate locally because the Arab audience is thirsty to learn about what the resistance is experiencing.”