Palestinian dramas are making inroads in the Arab drama world despite the lack of funds and high-tech facilities. 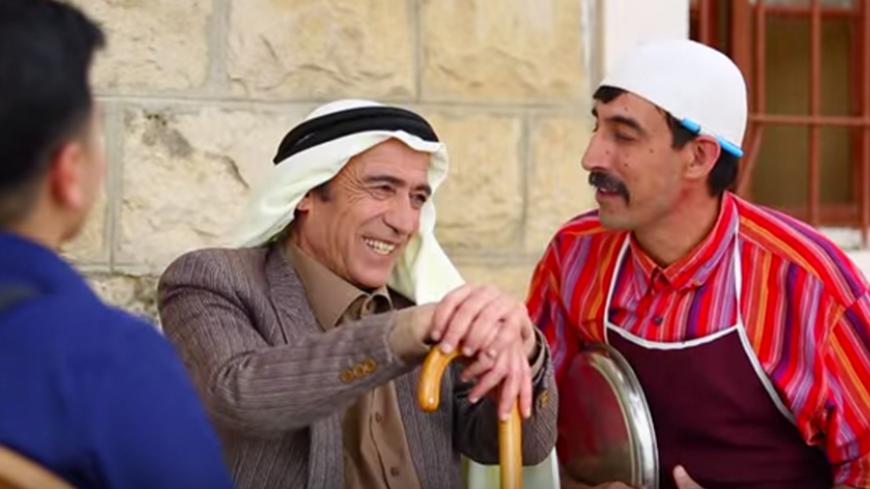 GAZA CITY, Gaza Strip — This Ramadan, Palestinians are entertaining themselves by watching the popular dramas “Kafr al-Lawz,” “Bas ya Zalameh,” “Fida’i 2” and “Watan Ala Watar.” They offer viewers tastes of satire, social commentary and drama in examining life in the Gaza Strip and West Bank. The series are positive additions to Palestinian drama, which has to compete with the more than 80 Arab TV dramas that began airing at the start of Ramadan.

Arab TV channels bought the rights to three of the series, “Watan Ala Watar” being the exception, to broadcast during Ramadan. Despite their low production quality, the Palestinian series are highly rated as evidenced by the number of views after being posted online following their broadcast. Some of them have registered more than 200,000 views.

“Bas ya Zalameh” ("Enough Man!") is a satirical comedy about the trials and tribulations of daily Palestinian life, including societal and other problems, like electricity cuts. It is being broadcast on the Jordanian Roya TV. The previous seasons had been available to watch online.

Hisham Adnan, an actor in the show, told Al-Monitor that the series’ objective is to raise awareness of social problems and issues in a comical way, but without trying to provide specific solutions to them. The popularity of the series over the past three seasons has prompted the show's team — the two main actors, the director, the producer and the cameraman — to work on another season of the series. The first season premiered in 2013.

According to Adnan, the biggest challenges facing Palestinian drama are the lack of cutting-edge equipment and official sponsors. Actors and directors must self-finance their productions in the hope that their show will eventually be marketed and broadcast by TV channels. The simple and colloquial dialect used in “Bas ya Zalameh,” which consists of episodes between 10 and 13 minutes long, has been the key to its success.

“Kafr al-Lawz,” named after a Palestinian village near Jerusalem, features the same satirical and comical style as “Bas ya Zalameh” and is being broadcast on Palestinian TV. It centers on the competition between two families in Kafr al-Lawz to lead the village council. Meanwhile, “Watan Ala Watar” ("Homeland on the Verge of Collapse") is being aired daily in Jordan, in an Amman hotel, by subscription. Palestinian satellite channels passed on the opportunity to broadcast it, perhaps because it is too critical in its satirical take on public figures. Each episode focuses on a particular social problem or issue, such as price hikes and travel by government officials.

“Fida’i 2” ("Resistance Fighter," season 2) is a drama being aired on the Hamas-affiliated Al-Aqsa TV. The series focuses on prisoners in Israeli jails, Palestinians confronted by settler attacks in the West Bank and the Israeli wars on Gaza. The first season of the series, which proved to be quite popular, aired during Ramadan last year.

Khalifa added, “Another purpose behind the series is to instill the concept of resistance against the Israeli occupation — which international law guarantees to the occupied Palestinian people — through the events unfolding in the series.” Khalifa declined to reveal the cost of producing the series' 30 episodes, each one 45 minutes long, on which almost 300 people worked.

Walid Abu Jyab, an actor in “Fida’i 2,” told Al-Monitor that the social, emotional and national character of his show greatly contributes to the series’ exciting and thrilling plots. This is despite ​the series focusing on Palestinians suffering in Israeli prisons and from attacks by settlers and the Israeli army.

Abu Jyab said he is satisfied with the series, despite the low quality of production facilities and equipment. He claims that large Palestinian and Arab audiences are watching the series.

Hazem Abu Hamid, a Palestinian director, told Al-Monitor that Palestinian drama is trying to put itself on the Arab drama map. It is still a fledgling sector, despite attempts to improve storylines, cinematography and production.

Noting that Palestinian audiences are free to choose from dozens of Arab TV dramas, Abu Hamid said, “The challenges facing Palestinian drama are story development, scripts and competencies, which are more important than the [financial] aspects and equipment. Many actors do their job for a living, not as a profession, in light of the widespread poverty and unemployment, and this is evident in the quality of the acting. To this is added the poor income those working in this industry receive. For instance, the extras are paid $10 per day.”

Palestine still lacks institutions to teach theater and acting, so maybe the problematic elements of Palestinian drama identifed by Abu Hamid will change when this situation changes.