A number of Syrian youth now living across the border in Turkey are using television series to articulate the suffering of Syrian citizens under the civil war. 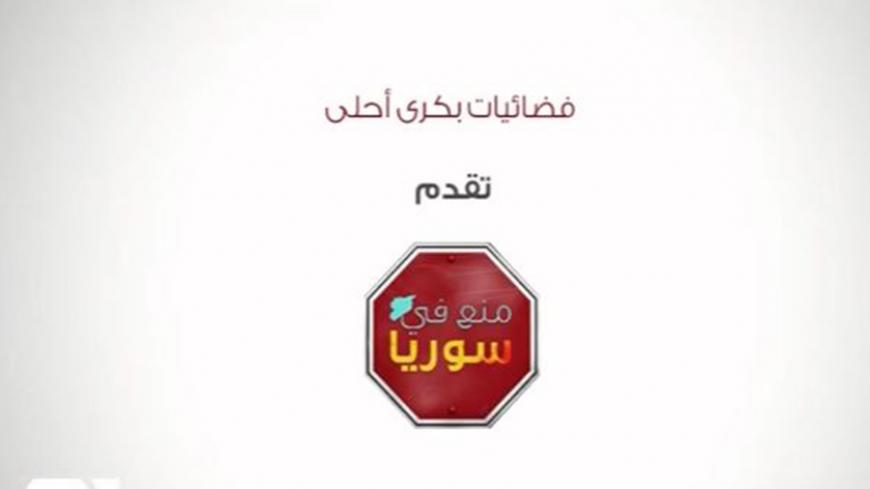 A still from the television series "Banned in Syria," shows the title page of the show, uploaded July 10, 2014 - YouTube/Lamba Production

Many educational, sports, humanitarian and even political groups have emerged in the liberated areas, namely those under the Free Syrian Army (FSA) and moderate factions — as well as in the cities, streets and neighborhoods of Syria, and abroad. Arts and creativity serve as important tools for Syrian citizens to voice their views and explain the difficulties and hardships they have suffered, in light of their gloomy future in war-torn Syria.

This is in addition to a number of short films discussing revolutionary aspects of the peaceful protests, shelling, immigration and arrests, including "319," a film directed by Roudi Abdel Rahman in the summer of 2016.

The most remarkable initiative to this effect was the establishment of Watar Technical and Film Production, a production house that started with Yamen Nour and Jihad Saka, whose dreams of a small project turned into a diverse team of actors, directors, interior designers and lighting technicians.

Nour and Saka, along with others at Watar Technical and Film Production, succeeded in articulating their views via a television series, including seasons one and two of “Banned in Syria” in 2014 and 2015, the sitcom “Umm Abdo the Aleppan” in 2015, as well as another production, season three of "Banned in Syria," which is currently set in Syria and Turkey.

Al-Monitor visited the set of “Banned in Syria” to speak to Nour in Gaziantep, in southern Turkey. He explained that the final scenes of this production are being filmed, and the season’s episodes will be aired next Ramadan.

Nour said, “I did not expect myself to manage to train a group of young people in drama work. I did it because they love learning and they love arts. They gave their time and I gave all of my capabilities. The crew at Watar Technical and Film Production has special equipment and talented youth — although the capabilities for productions affiliated with the Syrian revolution are below average, and we are actually unable to compete [in drama production or series] with those affiliated with the Syrian regime or others being aired on Arab televisions.”

Commenting on productions affiliated with the Syrian revolution, Nour said, “The Syrian revolution’s drama is still in search of directors, scenario writers and academics willing to serve the new artistic idea and orientation. All the productions and artworks that were done during the revolution were meant to serve the cause, although directors and actors did not make ends meet sometimes.”

Nour continued, “I am actually satisfied with the crew and performance of Watar Technical and Film Production. Our production may not rise up to the aspirations of the Arab television viewers, but 'Umm Abdo the Aleppan,' directed by Bashar Sakka, was aired on al-Aan TV. We might be able to market our new productions on the same television channel or even other ones.”

Born in 1983, Nour graduated from the University of Aleppo’s Fine and Applied Arts Faculty in 2002. He worked with dubbing and plays for children in Aleppo.

In Gaziantep, Nour met with acclaimed Bosnian director Aida Begic, who offered him a role in her new movie, “Orphan,” which is being filmed in a number of Turkish border cities, most notably Urfa, in southern Turkey. The film speaks of the Syrian orphans’ conditions and status.

Al-Monitor contacted Jihad Saka over the phone. Saka, also known as Abu Joud, is known among Syrian rebels to be a singer of the Aleppan revolution. His popular songs used to be played during protests and sit-ins.

Commenting on the drama production and cooperation with Nour and the crew at Watar Technical and Field Production, Saka said, “It was hard sometimes to think of the outcome and whether or not the series and actors would make a hit or be at least acceptable among the audience. We were, however, surprised that large segments of Syrian people, including those favoring the regime, were watching seasons one and two of 'Banned in Syria,' and there were growing signs on social media that it was highly viewed.”

Saka added, “Based on that, our ideas have evolved and contribution in arts has grown bigger. Filming and finding the right time to be on set in Syria and abroad was not easy to do. Yet our determination to carry on with the production has helped us overcome obstacles. We moved from the previous production house Fadaeyat Boukra Ahla in 2014 to Watar Technical and Film Production. We are now filming the last scenes of season three of 'Banned in Syria,' which is a black comedy shedding light on the concerns of weary Syrian citizens at home and abroad.”

Commenting on the filming and directing requirements in general and on whether or not they are available, he said, “What I can say is that lately, we started developing our equipment to meet the filming, casting and shooting location needs. We need more time and further opportunities to direct the making of the series in a better way, which is not at all an easy task to do.”

Nour, Saka and other Syrian youth who are eager for drama, art and cinema works have started to leave their imprint on the movies and series they make, as well on social media sites, where they are followed by people across the Syrian social fabric. It seems that Syria’s new history will witness the end of the art, cinema and theater institutions that were blindly affiliated with Bashar al-Assad's regime, served its interests, and disregarded any creative arts and styles that were internationally recognized.