Dozens of Syrian actors who were forced to leave Syria because of the conflict are trying to reassemble their lives and careers in Egypt. 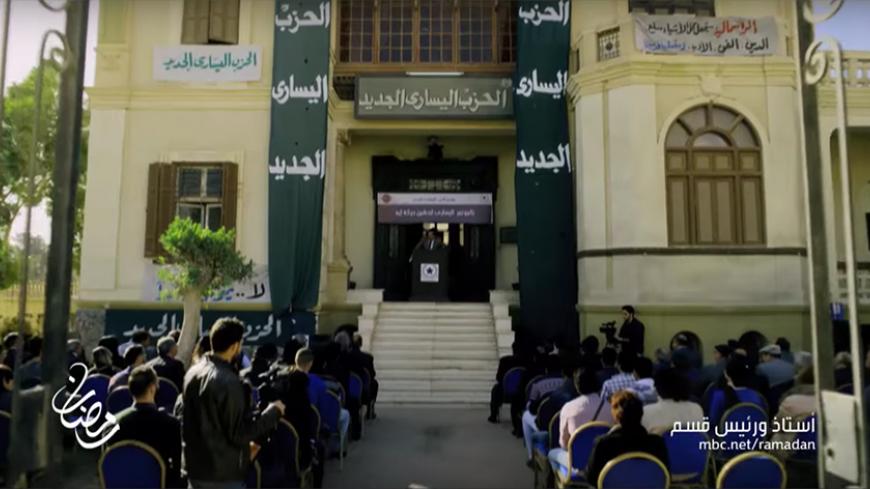 6th of OCTOBER CITY, Egypt — Dozens of Syrian actors had to leave Syria in the wake of the civil war that broke out in March 2011, and they mainly moved to three Arab countries — Lebanon, the United Arab Emirates (UAE) and Egypt. However, Egypt was the most important destination for them, despite the difficulties they faced there, including the differences between the Egyptian and Syrian dialects.

Al-Monitor met with Syrian actor and producer Farouq al-Shami at his home in 6th of October City in Egypt. Shami left Syria in 2012 because the crisis bred a lack of security and an inadequate work environment.

He said, “I left for Egypt because it has been the most suitable environment for artists, and it gives us better opportunities in the arts field. Besides, before the Syrian crisis, I participated in Egyptian series, and I realized that my professional life would be in Egypt.”

Shami began his artistic career with theater in 1994, then he moved to television series in 2001. He participated in 55 dramas and 15 Arab-produced series. He said he received several acting opportunities and appeared in Egyptian series in 2014, two years after arriving in Egypt.

He continued to say, “It took me two years to find my producer and artist friends [he knew before] after arriving in Egypt. Then, I starred in my first Egyptian series ‘Ostaz wa Ra’ees Kesm’ [Teacher and Head of Department].”

Shami is currently producing around a movie that includes 20 real-life stories of Egyptian army and police victims who died during battles against Egyptian terrorists. Egyptian businessmen are funding the production, and the movie will be shown in cinemas soon.

Meanwhile, a Syrian television star, Firas Ibrahim, who participated in more than 94 series and played the lead role in 85 of them in Syria, struggled to work in drama in Egypt. He settled there in 2012 after the Syrian war began.

Ibrahim, who also works in production, told Al-Monitor, “I did not take on any new production or acting project due to the ongoing Syrian crisis. Emotionally, I could not do it. My life hasn’t been the same. But, after a few years, I realized I had spent all I had and returned to drama. I played the lead role in two series in Lebanon in 2016 — ‘Madrasat al-Hob’ [The School of Love] and the historical series ‘Qudat Uzama’ [Powerful Judges]. I also founded my own production company and I am preparing several cinematic works in Egypt. I am ready to act again.”

Ibrahim, who lives in 6th of October City, believes Egypt is important for Arab art. But he said he never had the dream of going regional because Syrian productions are already popular in the Arab world. He said, “Syrian artists are already popular and highly regarded in Syria, but their popularity has increased due to the 90 million Egyptians. This is good for the Arab artist’s success in Egypt.”

Young Syrian actor Bassam Ali, who has been in Cairo for a year and participated in the Egyptian series “Al-Khanika” [The Mental Asylum] in 2016, told Al-Monitor that his starring in Egyptian drama is a huge shift and achievement.

Syrian refugees in Egypt are expected to reach around 124,000 by 2018, according to a survey conducted by the Interim Syrian Government. They have blended into Egyptian society and established businesses such as restaurants, while Syrian actors resumed their acting careers in Egypt.

Ali, who graduated from the Faculty of Journalism at the University of Damascus in 2007, entered the world of art in Syria in 2010 through the series “Matloub Rijal” [Men Needed] and “Dhakirat al-Jasad” [The Memory of the Body]. He participated in 16 series before having to leave Syria in 2012, when he headed to the UAE.

He added, “The Syrian war was never suitable for drama work. I traveled to the UAE, where I worked on a docudrama produced by Abu Dhabi State Channel that has yet to be broadcast, which depicts the life of former UAE Emir Sheikh Zayed al-Nahyan, and on two series with MBC — 'Forsa Thaniya' [Second Chance] and 'Fitnat Zamanha' [Strife]. I stayed in the UAE until 2016, then moved to Cairo after one of the producers of Al-Khanika nominated me to act in it. I am still in Egypt because it gives any Arab artist wider popularity as it is the Arab version of Hollywood. Still, I would like to return to Syria when the dust settles.”

Syrian artists have trouble speaking Egyptian dialect and mastering articulation of sounds, as Egyptian series are mostly done with actors who speak with an Egyptian accent. It is also difficult for Syrians to connect with Egyptian production companies, as so much is based on personal connections.

Ahmad al-Dare’, a Syrian journalist who lives in Egypt and is editor-in-chief of the Studio Alfan website, told Al-Monitor that Syrian art has been affected by the Syrian crisis at home and abroad. The war led to a production crisis due to the economic downturn that affected all aspects of life. Many artists left Syria to work abroad.

Dare’ pointed out the weakness of Syrian drama despite massive productions. He said, “In 2016, 28 series were filmed, but they focused on quantity rather than quality. Only two or three series succeeded. The rest were worthless, but they were just serving as a distraction for the public. Many Syrian artists found better opportunities in Egypt.”

He added that several Syrian artists achieved success in Egypt because the Egyptian audience embraced them. Others did not achieve much because they did not get golden opportunities to pursue their work due to their lack of artistic self-development or just because they weren’t popular enough to shine in Egyptian drama.