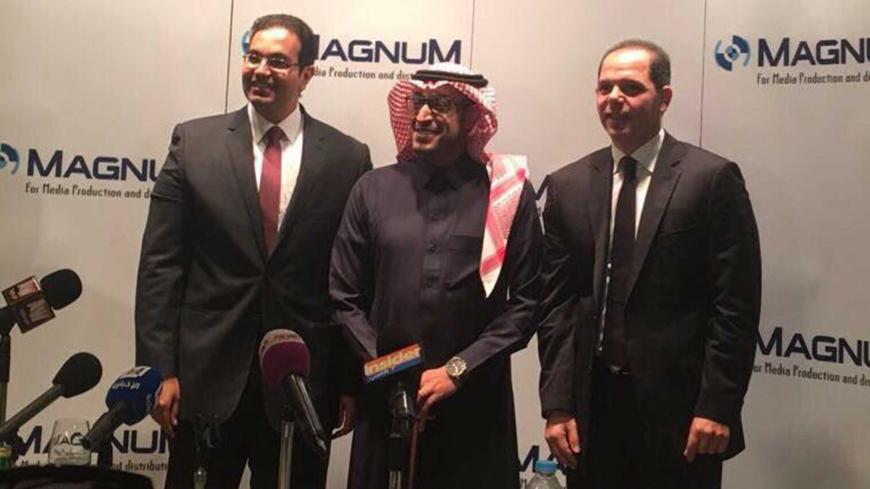 CAIRO — Saudi TV has signed a contract for the exclusive broadcast of two Egyptian drama series across the Arab world beginning during Ramadan 2018. On Dec. 8, Khaled Madkhali, director of state-owned Saudi TV, tweeted that he had signed a contract with Magnum Productions to broadcast “Hidden Worlds,” starring the legendary Egyptian actor Adel Imam, and “Tayeh,” starring the popular Amr Youssef. In a separate tweet, Madkhali added that the move is supported by Saudi Culture Minister Awad al-Awad, noting that it represents a quantum leap for Saudi TV. The cost of this deal has not been disclosed.

At a Cairo press conference on Dec. 3, Madkhali explained that a fondness for Egyptian dramas because of popular actors like Imam will make Saudi TV a center of attention in the Gulf and larger Arab world. Saudi TV is free and accessible across the Middle East.

Madkhali also pointed out that the contract stipulates that the series not violate the norms of Saudi society, and thus must avoid crossing certain moral and political lines. He did not elaborate on the parameters. Although Magnum had originally planned to produce the series independently, it will now do so with input from the Saudis. Al-Monitor attempted to contact Magnum Productions for further details about the deal, but to no avail.

Magnum President Rami Imam said in a press statement released Dec. 9 that Saudi TV will have exclusive rights to re-runs for “Tayeh” and “Hidden Worlds” for 10 years in the region, except in Egypt.

The series agreement coincides with a social and cultural reform campaign launched by Saudi Crown Prince Mohammed bin Salman to allow movie theaters to be opened and musical concert and comedy performances to be held in the kingdom.

The Egyptian director Magdy Ahmed Ali told Al-Monitor that the new openness in Saudi Arabia should be embraced and encouraged. “Egyptian drama producers need to take advantage of this to strengthen the Egyptian cultural presence in the kingdom,” he said, noting that the Magnum agreement will advance the Egyptian film and drama industries.

Ali also pointed out that the Saudi government's approach might allow Egyptian writers to convey ideas counter to the hard-line social practices that prevailed in the kingdom over the past decades, such as forcing women to cover their faces in public and banning muftis from listening to music. As for there being lines that should in theory never be crossed, Ali said, “Egyptian art addresses situations and ideas through drama, and we seek to gain wider margins of freedom in this regard.”

Ashraf Zaki, head of the Theatrical Professions Syndicate, believes the Saudis approached Magnum because Egypt is considered the Hollywood of the East, stressing that broadcasting actors such as Imam on Saudi screens will be met with acclaim in Saudi society. Zaki told Al-Monitor by phone that he hopes the Saudis will want to acquire rights to more Egyptian dramas and films down the line.

Magda Khairallah, an art critic, expects the Saudi agreement to help revitalize Egyptian artistic production, a first step toward opening more markets for Egyptian series and films. She told Al-Monitor that Saudi demand should also contribute to Egyptian producers being able to raise the price for distributors to acquire rights to titles.

Khairallah, however, expressed concern about artistic integrity and possible censorship. The Saudis are known to censor bedroom scenes, kissing and politics-related content.

Khairallah argued that art does not recognize limits or lines that are not to be crossed and that deleting scenes or blocking certain images ruins art and can put off audiences. Further, in light of there being conditions on the Egyptian series' content as per the Saudi-Magnum agreement, Khairallah remarked, “Artworks alone are not enough to free societies from radical and extremist ideas. A comprehensive strategy is a must.”

Screenwriter Wahid Hamed also had strong feelings about possible censorship, asserting, “Any work produced under certain preconditions is bound to fail.” Hamed told Al-Monitor that no good drama is produced based on prohibitions and that art in general is against such restrictions. He argues that if Saudi Arabia wants to engage with the free world, it must allow free writing, including on political and social freedom. “If art becomes a [censored] product, then we can bid creativity farewell,” Hamed said.

Director Camila Abu Zakri said to Al-Monitor, “Despite the Saudi restrictions, we have to deal with the move as a gesture of hope that contributes to a broader cultural exchange between the two countries.” Abu Zakri has directed several dramas that were shown on private channels in the Gulf, and some scenes were indeed deleted. She believes that the current intellectual developments in Saudi Arabia will have a positive impact on the region, and in Egypt in particular.

Abu Zakri cautioned, however, “We understand the cultural heritage of Saudi society, but the real concern lies in possibly producing works only to satisfy Saudi TV. We have to be able to create works as we see fit, and Saudi TV can either accept or refuse to buy them.”