An Egyptian series starring Egyptian actor Mohamed Ramadan angered Hamas for portraying the Gaza Strip as a drug den in the 1940s; Hamas also is critical of Ramadan over issues involving Arab states' normalization of relations with Israel. 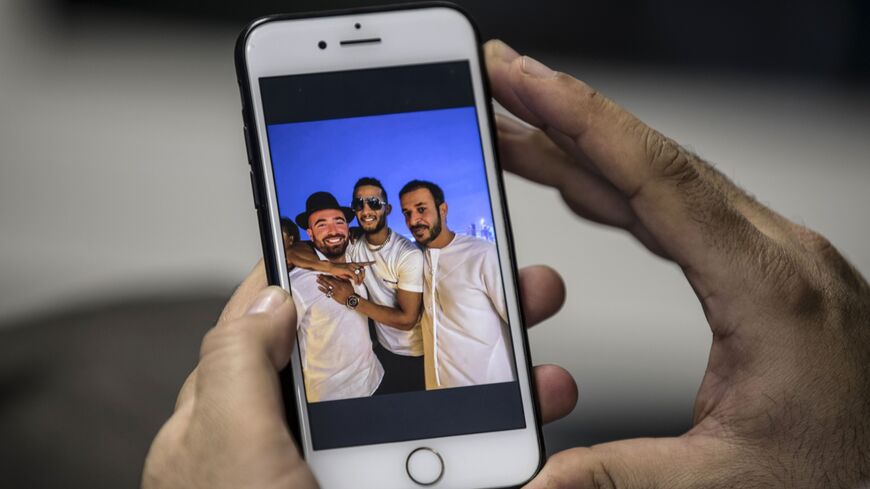 This image taken on Nov. 22, 2020, in Cairo shows a man holding a phone showing a picture of Egyptian acting and singing star Mohamed Ramadan (C) hugging Israeli singer Omer Adam (L) on a Dubai rooftop. The photo was posted by the official Facebook page of the State of Israel in Arabic. Ramadan, who boasts millions of followers in the Arab world and was the recipient of the 2019 All Africa Music Awards African Fans' Favorite prize, sparked a heated political debate after snapping selfies with an Israeli singer and soccer player. - KHALED DESOUKI/AFP via Getty Images

GAZA CITY, Gaza Strip — The Department of Artistic Production of the Hamas movement has lashed out at Egyptian actor Mohamed Ramadan and the creators of the Egyptian series “Musa” airing during the Muslim month of Ramadan. In a statement issued May 1, the department condemned the series’ use of the name of the Gaza Strip as a source for drug smuggling to Egypt.

The Department of Artistic Production said it “requires an apology from the people of Palestine and the people of the Gaza Strip who have been besieged for 14 years, which has proven to be a beacon of resistance and steadfastness.”

The Egyptian and Israeli authorities have been imposing a blockade on the Gaza Strip since Hamas came to power in 2007.

Mohammed Abu Thuraya, head of the Department of Artistic Production, told Al-Monitor, “Hamas denounces the use of the name of the Gaza Strip in the Egyptian series 'Musa.' Part of the series events take place in Gaza in the 1940s.” Thuraya said that in a recent episode of the series, Mohamed Ramadan appeared to agree to an offer to travel to Gaza to help a trafficker smuggle drugs.

Abu Thuraya expressed concerns that the series could be part of a larger plan at the level of artistic works aimed at distorting Gaza’s image. He said, “There is a systematic artistic ploy to target the Gaza Strip and the Palestinian people, and not only through drama. Ramadan previously met [in November 2020] with an Israeli singer and an Israeli soccer player in the UAE. Ramadan and Salama have gone too far in attacking Gaza. The Gaza Strip is a cradle of courage and resistance. It is a breeding ground for free people and not a drug den.”

Thuraya said, “Hamas issued a statement against this series, as part of a broader response to a large-scale attack against the Gaza Strip and the Palestinian people, whether in the 'Musa' series or in other previous series that condoned normalization such as 'Exit 7,' 'Um Haroun' and 'Haret al-Yahud.'”

The Kuwaiti series “Um Haroun” sparked controversy in the Arab world after it was broadcast during Ramadan last year, just months before the signing of the Abraham Accords. It was seen by many as a ploy to sway public opinion toward Arab-Israeli normalization. The soap opera stirred a debate about the historical facts leading up to the exit of Jewish families from Arab countries and about Jewish rights to the land of Palestine.

Although the events of "Musa" are set in the 1940s, decades before Hamas came to power in the Gaza Strip, Hamas was still provoked and surprised by the fact that the name of the besieged enclave was thrown into the series as a drug den.

Hamas, according to Thuraya, “is demanding Egyptian and Arab dramas to do justice to the Palestinian cause, shed light on Palestinian rights and fight ideas of normalization with the Zionists.”

The events in "Musa" are more social than historical. The story follows the journey of a young man named Musa from Upper Egypt, who had to bear responsibility for his brothers and his mother while facing many difficulties and crises after his father died. Musa was brought up by his grandfather, who taught him to love his homeland. However, his life is turned upside down after he meets a woman and moves to Cairo, where he works in trade and becomes one of the most important businessmen in the country.

Even before it aired, the series was ranked at the top of Ramadan dramas this year. This is due not only because of its thrilling story but also Mohamed Ramadan’s stardom. The actor and singer replied to Hamas’ accusations May 3 in a post on his Facebook page.

“I hope you watch the rest of the series before making threats and sowing discord between me and the honorable people of Gaza,” he posted. He added, “In the series, when Musa got injured, they [Gazans] treated him and took care of him. He is not a drug dealer. He learned an honorable trade in Gaza. Gazans helped him morally and financially due to the Arab brotherhood until he became a successful businessman. Of note, the story takes place in 1943.”

Mohammed Mahmoud, a pseudonym for a 24-year-old Gazan who did not want to reveal his real name for fear of being prevented from traveling through the Rafah border crossing, told Al-Monitor, “In the Gaza Strip, we love the actor Mohamed Ramadan, and we watch the series 'Musa.' But we have reservations about his recent behavior, mainly normalization acts with Israel, through his meetings with Israelis in Dubai.”

Ibrahim al-Madhoun, a Palestinian writer, political analyst and director of the Istanbul-based Association for Palestine Communicators and Media, told Al-Monitor, “There is no doubt that there are attempts to promote Arab-Israeli normalization and market it through artistic production.”

But Madhoun, who is close to Hamas, indicated that "Musa" was not part of any such attempt. However, he added, “Perhaps mentioning Gaza in the series was an unintended mistake. Gaza was never a drug den and portraying it as such in Egypt angered Hamas.”

He said, “There is a decline in promoting the Palestinian cause in Arab dramas. Years ago, major singers, directors and filmmakers would sing about the Palestinian cause that was always supported in Arab series and films. This support started shrinking, especially after the signing of the normalization agreement with the UAE.”

Madhoun also said, “I expect other attempts to promote normalization, especially after the intensification of confrontations in Al-Aqsa Mosque [in Jerusalem], the continuous escalation between Israel and Gaza and the failure of the recent US peace deal.”