A period TV series set in a historic multicultural neighborhood in Cairo is a departure for Ramadan television programming in the country. 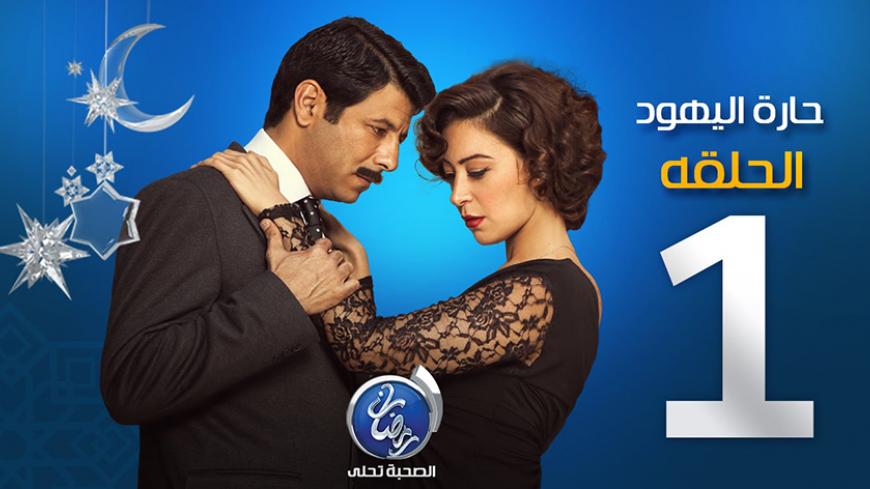 A promotional image advertises the first episode of "Harat al-Yahud" ("The Jewish Quarter"), an Egyptian TV series about the lives of Christians, Muslims and Jews in Cairo's historic Jewish district, June 17, 2015. - Youtube.com/Mehwar Drama

CAIRO — A new Egyptian TV series premiered at the beginning of Ramadan — “Harat al-Yahud” (Arabic for "The Jewish Quarter") starring Jordanian actor Iyad Nassar and Egyptian actress Mona Shebli. "The Jewish Quarter" is a Jewish-populated residential area in Cairo, where Jews, Muslims and Christians have been living since 1848.

Before the series aired, Israeli media seemed positive about it. The Times of Israel praised the series in its June 5 article, “'The Jewish Quarter,' a new Egyptian series for Ramadan, shedding a positive light on the Jewish community.”

When the series began showing, the Israeli Embassy in Egypt posted a brief statement in Arabic on its Facebook page, reading, “We have watched the first episodes of 'The Jewish Quarter' and we have noticed that it represents the Jewish people in a humanitarian light, as humans above all else, and the show has our blessing.”

However, the Israeli Embassy’s optimism did not last long. The first statement was followed by another several episodes later: “We felt extremely [disappointed] after watching 'The Jewish Quarter,' which began to take a negative turn, inciting against Israel by using the Jewish humanitarian characters to mask being anti-Israel, depicting the latter as a brutal enemy.”

The first episodes involve Ali (Nassar), an officer in the Egyptian army who loves Leila (Shebli), the Jewish girl who reciprocates his love. The series takes place in the 1940s and illustrates the ties between the Muslims, Christians and Jews who coexist in the quarter despite their different religions.

"The Jewish Quarter" is a residential and commercial area in Mouski, central Cairo. Jews started to leave Egypt for Israel in the 1940s, so there are virtually no Jews in the quarter now.

The series was largely criticized as soon as it aired. The Building and Development Party, the Islamic Movement’s political wing, demanded that officials prevent the broadcast, describing the show as “a new preamble to normalization between Egypt and the Zionist entity.”

Movie critic Tarek al-Shennawi said the most important reason behind accusing the series of "normalization" might be the fact that the Israeli Embassy first embraced it.

Series producer Mohammed al-Adel told Al-Monitor, “I do not care much for the Israeli Embassy’s opinion; we are not broadcasting the show for [the Israelis to watch].” He added, “The purpose of the series is to highlight the idea of accepting one another, and the series shows that the dispute with Israel is political, and not a religious one. The series respects all religions.”

Shennawi told Al-Monitor, “The controversy surrounding the series is due to the Israeli press and the Israeli Embassy’s broad acclaim before it was introduced, which did not sit well with the Egyptians, knowing that they tend to reject whatever Israel accepts, based on the Arab-Israeli dispute.”

Shennawi said, “'The Jewish Quarter' should not be accused of normalization, and we must differentiate between Judaism as a religion and Zionism as a policy adopted by Israel, adding, “Some Egyptians are used to seeing their enemy as a compilation of negative characteristics. If one is to say that there is democracy in Israel, they would be accused of normalization, as if attributing all negative traits to the enemy is a way to fight it.”

Egyptian drama has been known to confuse Jews and Israelis. It even attributed certain stereotypical features to the Jews, such as long noses and the curved backs, in “Raafat al-Haggan,” “Al-Soukout fi Bir al-Sabea” and "Doumouh fi Ouyoun Wakiha.”

Shennawi noted that the series' depiction of the Jew as a person no different from any other is “a positive thing; since in this series, a Jew loves and hates. He is not shown as a stingy person, like in previous series.”

The series has also been criticized for its technical mishaps. Magda Haroun, a leader of Egypt’s Jewish community, posted on her Facebook page, “The building entrances depicted in the series weren’t [historically] this wide and posh-looking.”

Told about this criticism, Adel said, “This is not a series about architecture. We are bound by the nature of the work we are filming. We are interested in presenting the idea of tolerance of others.”

Ahmad Fouad Anwar, a researcher specializing in Israeli affairs at Alexandria University, praised the series, saying, “The series is not a cliched generalization, and it focuses on Egypt’s national unity.”

But he reproached the producers for not having paid enough attention to detail in the lives of Jews. “These details should have been discussed with experts, but the content is good on the whole,” he told Al-Monitor.

Anwar denied the accusations of normalization. “I reject this insinuation," he said. "The series reflects an Egypt that is a welcoming home for Jews and a place where all people, whatever their religion, live in peace. This refutes the necessity of establishing the State of Israel, which is the main goal of the series.”

Several scenes in the series show Muslim Brotherhood-affiliated characters trying to stir strife in the quarter. One of these scenes showed Khalil al-Terrashji, a Muslim Brotherhood partisan as saying in the 10th episode: “Our only brothers are Muslims. Jews are not our brothers.”

The 11th episode shows a dialogue between the Jewish character Moussa and his mother in the wake of the assassination of Egyptian Prime Minister Mahmoud Fahmi an-Nukrashi by Muslim Brotherhood members. “If they killed the prime minister, what will they do to the Jews?” Moussa asked.

The series reflects the role of the Muslim Brotherhood in the Jews’ departure from Egypt.

“The Jews left Egypt gradually, even though the Muslim Brotherhood was responsible for a stage of this departure,” Mohammad Afifi, a history teacher at Cairo University, said. “The blasts that targeted Jewish facilities in the 1940s and that the Muslim Brotherhood was implicated in, like the Cicurel and Oréco Department Store explosions, were largely responsible for the migration of Jews.”

He does not blame the Muslim Brotherhood alone for the Jews leaving Egypt. “Other reasons prompted their departure, including the outbreak of the Arab-Israeli conflict in 1948 followed by England, France and Israel’s war against Egypt in 1956 — otherwise known as the Tripartite Aggression — after Egypt’s nationalization of the Suez Canal,” he said. “The last wave of departure of Jews from Egypt happened after the June 5 war of 1967, which Israel waged against Egypt. It was then that the Jews realized they could no longer live in Egypt.”