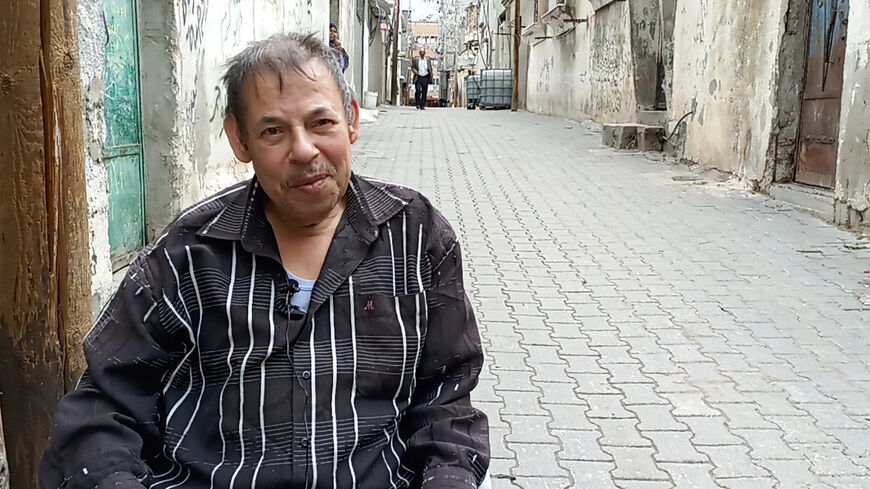 Muhammad Hassan Juha, 80, sits in front of his house in the Jewish Quarter in Gaza, where he has lived for more than 55 years, on Nov. 20, 2021. - Hadeel Gherbawi/Al-Monitor

In the Gaza Strip's Jewish Quarter, old and dilapidated buildings have a jagged structure coated with silvery zinc plates. The 4,000 square meters (1 acre) in the Zaytoun District (Harat az-Zaytoun), southeast of Gaza City, holds its name for being inhabited until the late 1960s by a Palestinian Jewish family.

Today, the features of this neighborhood are no longer different from the rest of Gaza. They all share the same architectural and demographic character.

Few of this quarter’s residents even know that it was called the Jewish Quarter. Those who do, think the name is due to a few Jewish graves that existed in the quarter in 1963, and not because it was once inhabited by Jews.

But the truth may not be to the liking of many Gazans who can hardly believe that this land once housed a quarter for the Jews who reportedly worked in agriculture and trade at a time when the community was not divided by political and religious differences.

Umm Abdullah Atallah, who has been living in the Jewish Quarter for more than 53 years, recalled the death of her daughter in the May 2021 military operations on the Gaza Strip. She told Al-Monitor, “The Israeli occupation killed my daughter.”

But she also acknowledges that “Muslims, Christians and Jews once peacefully coexisted in this area, until the 1948 war, when the Jews began to leave Gaza.”

She said, “In the past, the land was owned by a Muslim family, but it turned into a graveyard for Jews who lived in Gaza previously. It was surrounded by lands planted with grains such as wheat and barley, but after the war, when Egypt took over the management of the Gaza Strip, the land was allocated as compensation to the families whose homes were demolished to expand the nearby Salah El-Din Street. These families were given official title deeds [by the Egyptian Ministry of Endowments]."

Atallah explained that she bought the land on which she built her house for 28 Egyptian pounds ($63), a significant sum at the time, noting that construction at that time was governed by conditions set by the Egyptian administration. Most of the houses that were built at that time were made of tin or asbestos. “The Palestinian families who currently live here are Juha, Awad, al-Maradi, al-Sous, Ali Hussein, Atallah, al-Madhoun and Abu Wadi,” she added.

Al-Monitor conducted an extensive and historical search to find out the history of this quarter. Inquiries were sent to the Ministry of Tourism and Antiquities in the Gaza Strip, the Islamic University,  and Al-Azhar University, the municipal library and the Qattan Foundation’s library. Al-Monitor also contacted several archaeologists and university professors, but most of them refused to talk about the history of this quarter. Talking about the historical presence of Jews in Palestine is complicated, especially in the Gaza Strip. Palestinian citizens do not want to shed light on any presence of Jews in any area with a Palestinian concentration.

These were Palestinian Jews, not Israelis, and there was no enmity with them in that period. After the occupation, the conflict with the Jews became a civilizational, religious and historical conflict. Therefore, no one wants to talk about the history of this neighborhood at all.

Gaza historian Nasser al-Yafawi told Al-Monitor, “Everyone avoids talking about the Jewish Quarter or anything related to the Jews in the Gaza Strip due to the religious and political implications of this issue, marred by long-standing civilization and religious conflicts. But this does not negate the existence of the Jewish Quarter and the grove in Juhor ad-Deek, which was owned by a Jewish woman before 1948.”

He added, “Before the Israeli occupation, Palestinians did not view the Jews as enemies. Jews undertook commercial projects and owned land. The relationship between the Muslim and Jewish communities was fraternal until the emergence of Zionism and the project of occupying Palestine.”

The Jewish Quarter in Gaza consisted of a few houses surrounding a grain mill over an area not exceeding 4 acres and was reportedly inhabited by one family headed by a Jewish man.

Based on information obtained during his studies at Birzeit University from history professor Roger Heacock, Yafawi said that after the 1967 war and Israel’s occupation of the Gaza Strip, Israel removed the remains of about 12 Jews buried in Gaza and took them to Israel at the order of then-Defense Minister Moshe Dayan. “This is for two reasons. The first is that Gaza was seen as a cursed land in the Jewish religion, and the second is the political and field circumstances in Gaza,” he explained.

He noted, “In the early 1950s, the Egyptian administration expropriated lands in the area to expand the main Salah El-Din Street. It compensated those affected with other land plots within ​​what is known as the Jewish Quarter. The Jewish cemeteries, however, were preserved and Jews continued to visit their loved ones even under Egypt’s rule.”

When Israel took over the Gaza Strip, Israeli institutions such as the Jewish National Fund and the Custodian of Absentee Properties Department sought to recover the quarter from the Palestinians by submitting title deeds proving the ownership of the lands by Jewish families before 1948. Their first success was the transfer of the remains of the Jews' bodies under the supervision of the representative of the Mizrahi Jews' rabbis.

In turn, the Palestinians who resided in the quarter presented ownership documents obtained from the Egyptian land and real estate properties department. Yafawi explained, “After lengthy legal procedures, the Israeli Supreme Court ruled in favor of the Palestinians and obligated the Jews to assign the lands. The court was persuaded by the fact that Gaza was seen as a cursed land and the main battleground of a constant conflict. The Supreme Court rejected the claims filed by Jews in this case.”

He concluded, “The only book that addresses the Jewish Quarter in Gaza, briefly, is 'Gaza Through History,' by Ibrahim Khalil Skaik. Not many people in Gaza know that the Jews had a neighborhood in Gaza. The issue remains taboo and highly frowned upon in a society that sees Israel only as an enemy amid the repeated attacks over the years of occupation.”

Abdel Raouf Shniora, a 60-year-old Palestinian from Gaza, who lives in the Jewish Quarter, told Al-Monitor, “In the early 1960s the quarter was part of our groves. There were very few graves for Jews. It was a land planted with wheat and barley, surrounded by lemon trees.”

His octogenarian neighbor, Mohammed Juha, who was sitting in front of his house, told Al-Monitor, “I have lived here since I was young. My grandfather bought this house. I remember that Jews would come to this neighborhood to visit the graves of their loved ones. All we know is that this neighborhood is called the Jewish Quarter because there are graves for Jews in it. When we moved here in the 1960s there were no Jews, only Jewish graves.”

Despite the Arab-Israeli conflict, no one can deny that the Jews have a history in the Arab region, whether in the Arabian Peninsula, Egypt or the Arab Maghreb. Today, despite harsh criticism, some literary and artistic works are shedding light on this Jewish presence, such as the novel “In My Heart a Hebrew Girl,” by Tunisian novelist Khawla Hamdi, the novel “Zilah” by Israeli writer Judith Katzir and the TV series “Harat al-Yahud” ("The Jewish Quarter") produced in Egypt in 2015.