What is traditionally a light-hearted roster of Ramadan entertainment featured heavy themes of death, revenge and tragedy this year. 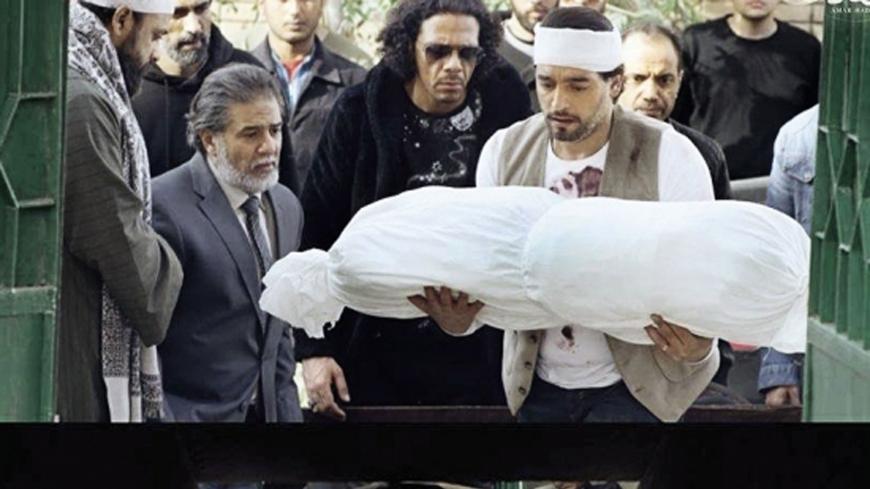 CAIRO — Those who assume Egyptians spend their Ramadan evenings with light television entertainment may revise their thinking after the 2019 season. Many Egyptian TV series this May feature a protagonist carrying the dead body of a loved one or a shroud-wrapped comrade being lowered into a grave.

This tragic death scene is repeated in three different Ramadan series — "Abu Gabal," "Hadotet Morra" (“A Bitter Story) and "Qamar Hadi" (“Hadi's Moon”) — in more or less the same setup of tragic faces and white shrouds. For seasoned watchers of Egypt’s Ramadan TV series, the scene was a throwback to 2017's "Zel Al-Raees" (“The President’s Shadow”), a tale of political power, corruption and assassination.

The show's most memorable scene was of a former presidential guard — played by Yasser Jalal — carrying the dead bodies of his son and wife. The series had topped that year's must-watch list.

The graveyard scene was repeated last year, this time in "Tayea," a saga of love and revenge in Upper Egypt. The popular series, currently on Netflix, revolves around a doctor who stands firmly against the idea of vengeance and gets tangled up in the business of smuggling antiquities.

The 2019 Ramadan season has seen heavy competition between 25 Egyptian series, 12 of which were tragedies in which the hero's close friend or beloved was killed in an accident, violent crime, natural disaster, serious illness or act of terrorism claiming dozens of victims. Only eight on the whole list were comedies — and most have received bad reviews on social media for being “absurd” or “lackluster.”

“Death and tragedy has become a winner in the Ramadan series,” Mahmoud El-Zalbani, a member of the Egyptian Film Critics Association, told Al-Monitor, adding that this was hardly novel. He pointed out that people still remember 2007's "Yetraba Fi Ezzo" ("Raised Up with Ezzo"), in which the hero, a diabetic with an Oedipal attachment to his mother, tries to kill himself after her death.

"Tragedy was then used as a beginning or a major point of attack at the beginning or mid of very successful series, as the tragic scenes helped the audience to connect with the heroes and the plot,” he said. “But [the overuse] turns Ramadan into a bleak drama season and [disappoints] the viewer's expectations of light social films and comedies," he explained, adding “One cannot pass the whole season on tragedy and death alone.”

Film historian and critic for Egypt's Al-Shorouq newspaper Mahmoud Abdel Shakour wrote on Facebook May 27 that the 2019 Ramadan season was unimaginative and repetitive and that most of the series were copycats of previous Egyptian series or foreign works.

“It is not wrong to reintroduce an old idea again or to to be inspired by a non-Egyptian work in an Egyptian format,” Shakour told Al-Monitor. “But you need to reinterpret the idea or the theme with a new twist, a new point of view - or a new outlook from the writers, directors and actors, so that the audience feel that they see something different from what they saw in previous years or in non-Egyptian series.”

The current generation of cinematographers and dramatists has great potential that is underused at the moment, he said, noting that there were successful TV series based on famous novels in previous years, but not this Ramadan.

Critic and writer Kamal Ramzi agreed that current Egyptian shows tend to depend on elements of exaggeration and hyperbole rather than dramatic content that provides a realistic and nuanced take on issues in Egyptian society. “The only realistic series this season is "Lams Aktaf" (“Wrestling Pinfall”), which deals with the traffic of drugs,” he said, "despite its technical shortcomings."