Once a popular pastime among Iraqis, cinema attendance has all but disappeared since 2003, to the detriment of youth aspiring to study cinema at Iraqi universities. 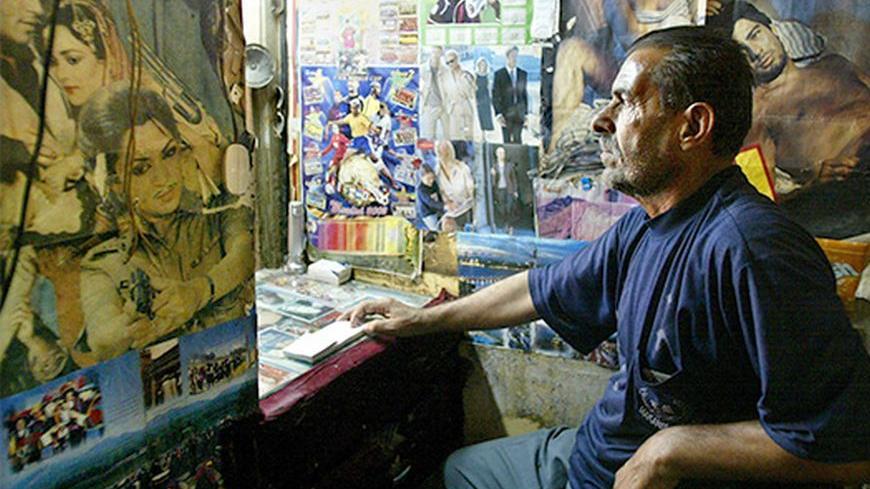 One of the strange indicators in Iraqi culture today is the graduation of dozens of cinema and cinematic art enthusiasts from the film departments in academies and technical institutes every year. Yet, they are taken aback by the harsh reality that there is no real cinema production, and the harsher fact that there are no movie houses in the country.

Bashar Kazem, a young film director and critic, told Al-Monitor, “The number of graduates from the cinema departments in Iraq ranges between 60-70 students per year.” However, “The number of graduates does not necessarily produce any sort of movement in [Iraqi] cinema. The methodology used in the program is classical and academic, lacking the practical components or measures to keep up with technological developments. Thus, there is a lack of technical personnel capable of making a film.”

These harsh facts are countered with the vital facts that highlight the importance of film in shaping the sources of contemporary culture in Iraq. The last big American film before Saddam's invasion of Kuwait in 1990 was "Batman," whose premiere was shown in the Babel movie theater on Saadoun Street, in the middle of Baghdad’s social and cultural district. The premiere of this film in Iraq coincided with showings in various capitals around the world. This goes to show that, at the time, the latest American films were being screened and attracted the attention of many Hollywood fans in Iraq.

With the Iraqi invasion of Kuwait and the imposition of the toughest sanctions in UN history, Iraq’s movie theaters were unable to import new films.

In the days following the fall of Saddam Hussein’s regime, many anticipated that American culture would prevail. Yet, the paradox is that the “new Iraq” has witnessed a merciless war against all forms of modernity in terms of culture, the arts and sciences, in favor of religious extremism. This reflected the presence of representatives of religious extremism among the ruling political elites. Following 2003, movie screens turned off,  theaters were closed, and sometimes even burned down. This was the case in the majority of Iraq’s Arab provinces, where music and CD shops were defaced.

Today, there are no high-quality movie theaters in Baghdad, Basra — the second-largest city in the country — or Mosul, which has become the stronghold of religious and ethnic extremism since 2003. There are no Hollywood shows in the “American Iraq,” except for those provided by Arab and American TV channels that can be watched in the region.

It is true that there has been no decision issued by the Iraqi government to ban American and Western films and programs in general, but the channels controlled by the government do not actually broadcast any Western movies or music. Meanwhile, they are keen — alongside dozens of TV channels controlled by the ruling religious parties and influential through their militias — to broadcast a culture that writes off good music and fine movies as taboo, even in the absence of an official government decision.

The universities of Baghdad, Babil and Diyala grant degrees in film studies and arts. The cinema and TV arts department at the Faculty of Fine Arts of the University of Baghdad seems to be the oldest in Iraq. It was established as part of the theater arts department  during the 1973-1974 academic year. At the beginning of the 1981-1982 academic year, the radio and TV division was created. The latter was part of the theater arts department, as was the case with the cinema division. At the end of the academic year, the cinema division and radio and TV division merged, including later on the audiovisual arts department that includes cinema, TV and radio studies, managed by the late academic and director Jafar Ali.

Nevertheless, Bashar Kazem, a young film director and critic, told Al-Monitor: “Many students resort to arts colleges and institutes given their weak academic achievements in high school. Thus, they are there merely to get a degree, not because of talent or proficiency.”

Besides the weak academic level of cinema arts, Kazem noted, “What makes the number of cinema students particularly meaningless is the lack of institutions that support cinema activities.”

When the malls are spaces for screening films

With economic and social openness, which Baghdad and some Iraqi cities have begun to undergo, malls have turned into spaces for film showings. The Iraqi Cinema company confirmed that it was opening a new branch in a mall in the city of Erbil, in the Iraqi Kurdistan region.

Dananer, an economic website, reported that the cinema at the Royal Mall in Erbil will consist of five theaters, three of which can accommodate as many as 80 people, and the other two can accommodate 125 people.

The company’s first branch is in the Iraqi Hunting Club in Baghdad, from which it will move toward supporting cinema culture in Iraq and give foreign and Arab films a chance to garner popularity. The opening of two movie theaters in the Erbil and Mansour mall in Baghdad, without government or external support, reveals that “there are active youth working to deliver a message to the outside world that Iraq is keen to evolve and keep pace with other countries,” Dananer reported.

The activities for the “Baghdad, capital of Arab culture for 2013” celebration consist of producing seven Iraqi films and nine plays.

Bushra Jaafar, managing director of “Baghdad, the capital of Arab Culture” said the Cinema and Theater Department at the Ministry of Culture “has achieved remarkable success by preparing eight long narrative and documentary films, which are ready to be shown in movie theaters. Additionally, nearly eight others are being filmed, including  al-Wasiti, directed by Tareq al-Jubouri. Meanwhile, [work] has not been started on al-Hisan, directed by Thaer Mohammed Yousef, and al-Ustaz, directed by Hamdiya Abdul Karim, which are included in the plan.”

On the other hand, the Cinema and Theater Department announced: “There are seven movies, namely Najm al Bakkal, Baghdad Hilm Wardi,  Ahlam al-Yakaza, al-Hayat al-Chaika, al-Siyab, al-Jaysh al-Iraqi and Birj Badel, which are now ready to be shown in what [the ministry] hopes will reveal Baghdad’s radiant culture, [which is a symbol of the country’s] civilization, peace and creativity.”

Film activities involved in the “Baghdad, the capital of Arab culture for 2013” celebration, seem attractive, given that they promise to revive the film industry in Iraq. Yet, this collides with the same intrinsic facts about the value of film production in a country that is not familiar with the culture of viewing films in movie theaters, which do not meet the minimum expectations of Iraqis for a cultural space that was a source of knowledge and high-end entertainment before 1990.

Ali Abdulameer is a contributing writer for Al-Monitor’s Iraq Pulse. A writer, journalist and TV presenter residing in Amman and Washington, he was editor-in-chief of a number of cultural magazines and Iraqi newspapers, and was the managing editor of Iraqi news in the Arabic-language American Al-Hurrah. Abdulameer presented a show entitled "Seven Days" from 2004 to 2010. He is currently working as a correspondent for Al-Hayat.