With Erbil slated to be the 2014 Arab Capital of Tourism, the city has teamed up with the private sector to build 14 movie theaters, decades after general interest in cinema had dwindled. 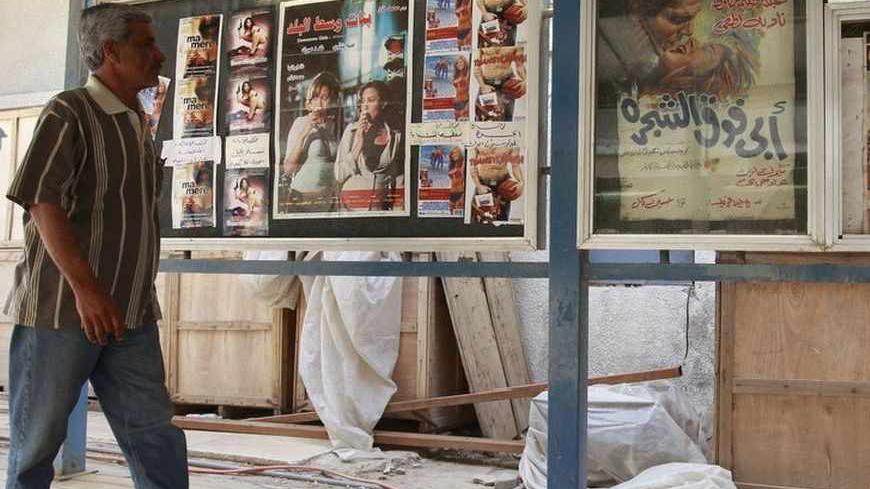 A resident walks past the entrance of a cinema in Baghdad, Iraq on April 26, 2011. Iraq once had 82 cinemas, 64 of them located in the teeming capital. One by one, they closed during the Saddam era, when the government controlled the selection and importation of films, until only five remained at the time of the US invasion. - REUTERS/Mohammed Ameen

Over the past two decades, the citizens of the Iraqi Kurdistan region have refrained from going to movie theaters. Some of these theaters, which succumbed to neglect, have been demolished and turned into parking lots or warehouses after they failed to generate any profit. However, this June, 14 movie theaters were opened as part of a joint Iraqi-Lebanese project. Characterized by modern design and specifications, four of the theaters are even 3-D.

Lebanese national Pierre Makary, CEO of Empire Cinema in Erbil, told Al-Monitor that the owners of the company are Mario and Jino Haddad. The two came to Erbil, assessed the situation and concluded that entertainment venues should be built in the city, especially after it was named the 2014 Arab Capital of Tourism by Arab foreign affairs ministers. The Haddads have owned movie theaters in Lebanon since 1919, and have now concluded an agreement with Iraqi-Kurdish partners to launch the project.

It is worth noting that Erbil is the largest city in the Iraqi Kurdistan region. The Kurdistan Regional Government (KRG) is exerting strenuous efforts to introduce the city to the Arab world and attract Arab tourists.

Makary noted that the 14 theaters have seating capacities of 100 to 400 persons. "Some movies are showing simultaneously with the US," he said, adding that theaters will air films from Hollywood, Bollywood, Egypt, Iraqi Kurdistan, and Turkey. Currently, the theaters provide Arabic translation of the movies. Makary said that they are working on adding Kurdish translations, given that the majority of attendees are Kurds and Arabs.

Apparently, reviving movie theaters in Erbil and other Iraqi cities will take time, since citizens and movie enthusiasts lost trust in these theaters long ago. Makary said, “Encouraging the local population to attend theaters takes time. In Erbil, many are passing by and asking about the movies, especially the new ones. They are waiting for the movies to be shown, notably the younger generation.”

Speaking of the specifications, Makary noted, "International standards are used and the theaters are designed pursuant to international theater designs. The equipment was brought from Europe and the US."

Makary pointed out that in the past, movies were recorded on 35 mm film. These days, movies are recorded on a hard disk, featuring a key that allows it to be shown on a specific date. Additionally, all the devices are digital. Such strict measures were adopted, Makary noted, to prevent new movies from being copied and sold on CDs at rock-bottom prices.

Makary explained, "We have employees that check the theaters and prohibit the audience from recording movies, whether using cell phones or cameras. Cameras are not allowed inside the theaters, and if anyone is caught trying to record the movie we delete the footage."

Fadel al-Jaff, a consultant to the KRG Ministry of Culture, Sports and Youth, reiterated the importance of having modern movie theaters in Erbil in order to revive this sector. “The return of movies to theaters, especially these high-tech theaters, is a turning point that I hope will lead to the construction of other theaters in Kurdistan," he said.

Mohammad Zankana, a Kurdish arts and culture journalist, told Al-Monitor, "In past years, going to the movies had a negative social connotation. Yet, after seeing the new theaters and the featured movies, I believe that this is an important step toward reviving this sector." Zankana reiterated the importance of family-friendly movie theaters. "We hope to see movies for children and for specific age groups, so as to encourage families to frequent movie theaters, especially since Erbil will be the Arab tourism capital."

Historically, the area's first movie theater, the Saladin Theater, was launched in Erbil in 1946. Five more theaters were opened by the end of the 1980s, which later turned into neglected spaces. The Saladin Theater, along with others, was demolished. Theater owners did not attempt to renovate their properties according to modern standards or to show new movies that the public would enjoy.