A book fair in Erbil, Iraqi Kurdistan's capital, showcased regional and international literary talent and served as a unifying event against a backdrop of violence and sectarianism, writes Abdel Hamid Zebari. 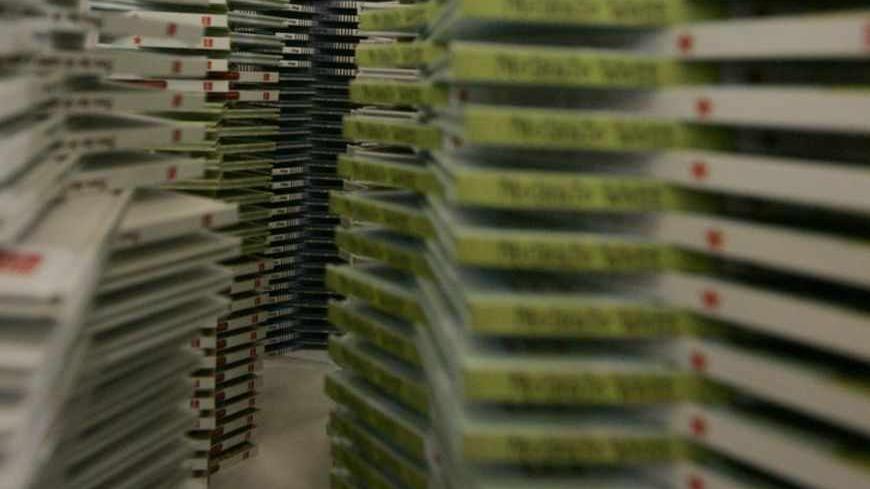 The 2013 Erbil International Book Fair, organized by the publishing house Al-Mada for Media, Culture and Arts, showcases more than a million books in their original languages. Erbil, the largest city in the Kurdistan Region of Iraq, is hosting the fair's eighth gathering, which opened April 2, in cooperation with the Kurdistan Regional Government’s (KRG) Ministry of Culture and Youth.

The organizers this year deliberately chose not to feature books promoting violence or sectarianism. Al-Mada general manager Ghada al-Amili said in a statement to Al-Monitor, “There was a prior agreement between the Ministry of Culture and Al-Mada to limit extremist Islamic publishing houses. We imposed strict regulations and censorship on books that incite violence and sectarianism, and we succeeded in deterring the participation of these publishing houses, and for that we apologize to them.”

She added, “This year, more than 1.5 million original books were featured in the fair. They varied — from scientific to philosophical, translated and biographical and all other types — in a bid to meet the needs of buyers. We also provided extensive facilities to all participants to ensure a high level of participation in the upcoming years.”

“In past years, participating in a book fair held in Iraq, amid the precarious security situation, was marked by fear. In recent years, however, we have noted an increase in participation. Another concern, that of language, was present, since the fair is hosted in Kurdistan, which means that the language required is Kurdish, yet the buyers and participants were seeking [books in] all kinds of languages, from Arabic to Kurdish, English and even French and German,” Amili affirmed.

The book fair, Amili noted, was supposed to be held each year in Baghdad, but had experienced numerous obstacles. “Sending books to Iraq [including] Baghdad from publishing houses has become almost impossible, given the supposedly routine procedures [affecting] publishing houses, such as the difficulty of obtaining permits, in addition to tight control and censorship. This fair differs in that concern.”

According to Amili, “The federal Ministry of Culture in Baghdad is not ready to hold such cultural events. It imposed unreasonable financial conditions not only on the organizing body, Al-Mada, but also on the participants.”

In a speech delivered during the opening ceremony, Kawa Mahmoud Shakir, KRG minister of culture and youth, proclaimed, “This fair supports democratic artists, intellectuals and innovators in the Arab world, who are leading a struggle against the Islamized tyranny that replaced the totalitarian regimes ousted during the Arab Spring. … We, as the Kurdistan government, announce our solidarity with democratic intellectuals and artists in Iraq and the Arab world who are striving to achieve progress and liberation in order to preserve human rights.”

The Lebanese Shiite thinker Hani Fahs, who attended the opening ceremony, hoped for such fairs to be held in all Iraqi and Arab cities, reiterating the region’s need for genuine and modern culture. Speaking to Al-Monitor, Fahs said, “The advancement of knowledge requires setting up lots of activities. Some Arab fairs were shut down and became financially unsustainable at a time when we need culture and authentic knowledge most — especially in the face of this suffocating Salafist environment. We need a genuine and modern culture.”

Walking through the fair’s corridors, one notices that a significant number of Iraqi intellectuals have came to Erbil to participate in the fair, transforming it into a gathering for Iraqi and other Arab intellectuals, artists and writers.

Speaking of the fair, Iraqi novelist Latifa al-Dulaimi said, “The fair shows the development of people’s awareness of the importance of books. I saw many Arab and Kurdish publishing houses present. … Culture is an important factor in introducing the people to one another. This fair has proved that this is true.” Dulaimi added, “I met Arabs from Iraq and all over the Arab world. It is a chance to meet with intellectuals and writers and be informed about the latest developments in the publishing field.”

The Iraqi writer and journalist Sarmad al-Taki took note of the large number of Arabic books featured in a Kurdish stronghold that continues to struggle with Arabs over its rights. He sees the fair as a major shift in the Middle East. “It is a cultural phenomenon to see Arabic books in Kurdistan, in the sense that deep transformations are coming to pass in the Middle East. We see many prominent Arab intellectuals coming from different countries to Kurdistan, discussing the affairs of the Middle East, buying books, planning new projects for books and moving closer to the Iraqi culture, with which the precarious situation in Baghdad hampered them from becoming acquainted,” said Taki.

A number of Arab publishing houses have participated in the fair for more than a year now. One regular participant, Al-Jamal, a German publishing house, features the latest Arabic translations of international novels, literature, cultural works and art books. Abdullah Jasem Mohammed, Al-Jamal representative in Baghdad, said of the fair, “It is a great event. … Our sales during the last years have hit record levels, and we expect it to be as good this year. That’s why we participate in the fair every year,” Mohammed said.

Abdel Hamid Zebari is a contributing writer for Al-Monitor’s Iraq Pulse. A reporter from Erbil who works in print journalism and radio, Zebari has published in local and international media, including Agence France-Press and Radio Free Iraq (Radio Free Europe).