New investment projects in the Kurdistan Region of Iraq have led to a strengthening of ties with Arab states, writes Abdel Hamid Zebari. 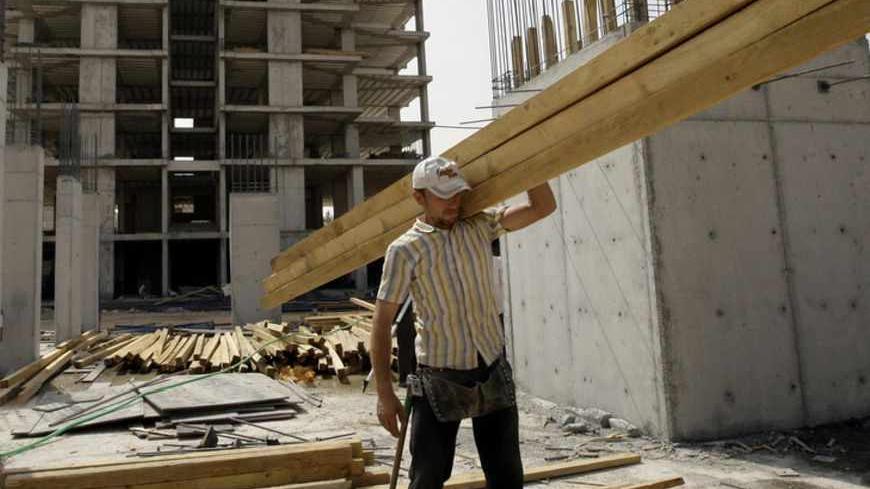 A man works at a construction site in Iraq's northern province of Erbil, Sept. 25, 2010. - REUTERS/Azad Lashkari

Arab states no longer look at the Kurdistan Region of Iraq with suspicion and apprehension, especially after the regional capital, Erbil, was selected as the Arab Capital of Tourism for 2014. Furthermore, economic and trade relations between these states and the Kurdistan region have evolved.

It appears that developments in economic and trade relations between Arab states and the Kurdistan region of northern Iraq have preceded the development of political ties. Statistics released by Kurdish institutions concerned with investment in the area show that Arab companies — particularly from the United Arab Emirates (UAE)  and Lebanon — have invested billions of dollars in oil and construction in the region. This has led many Arab states to open consulates and representative commercial offices in Erbil.

Mufti Kamran Raqeeb, the general manager in the Kurdistan Regional Government's (KRG) investment agency, said, "The KRG's investment law does not differentiate between national and foreign investors. They both have the same rights. This has led to the emergence of Arab and foreign investment in the region."

According to Raqeeb, the region has immense natural resources, including vast agricultural areas and numerous sources of water. This is in addition to other elements that might attract tourism investment. Raqeeb stressed, "The region has succeeded in opening up politically and economically to the brotherly neighboring states, the Gulf states, Egypt and Lebanon. This includes many prospects for economic cooperation, given that there are many Arab businessmen who are investing their money in the region."

Raqeeb said that the Arab investments have accounted for 10% of all investments in the region, which amounts to $26 billion dollars. The regional government has worked to adopt an investment policy that focuses on three strategic sectors — industry, agriculture and trade — as priorities for the coming years. Said Raqeeb, "We are hoping to expand investment in the region, particularly Arab and foreign investment."

According to Abdul Rahim, "A number of Arab states, including the UAE, are carrying out large projects in the construction sector. There is also notable Lebanese investment." He added,  "We are hoping that other Arab states will take big steps as well."

Statistics provided by the KRG's Ministry of Trade and Industry reveal that there are 2,250 foreign companies operating in the region, including hundreds of Arab enterprises. Fathi Mohammed Ali, a counselor in the Ministry of Trade and Industry, said, "This includes 98 Emirati companies, 97 Lebanese companies,  and 12 Egyptian companies, as well companies from Jordan, Saudi Arabia, Kuwait and other Gulf states." He added, "These include very large companies, such as UAE's Dana Gas Company, which has invested more than a billion dollars in the field of gas, as well as the Lebanese Dar Engineering Company, which has a great tradition in reconstruction and building efforts."

Ali told Al-Monitor that the government wants to encourage large projects, stating, "The Egyptian Valley of the Kings Company has recently submitted a request to the investment authority to build eight large factories for the food, clothing and construction industries."

Egypt was the first Arab country to open a general consulate in the Kurdistan Region of Iraq. Jordan, Palestine, and the UAE then followed suit, and Lebanon is currently in the process of doing so. There are a total of 27 foreign consulates and representative offices in the region.

Salman Osman, Egypt's consul general in Erbil, noted, "The diplomatic presence in the region has a positive and significant effect on the development of economic relations." He added, "Before opening the consulate, [Egypt's] level of trade with the region was virtually nonexistent and amounted to only about $50,000 per year. However, after [Egypt] opened a consulate and trade office in the region, there was a significant jump in trade, reaching $23 million in 2011 and $50 million in 2012. This came as the result of visits by commercial and economic delegations on both sides."

Osman also observed, "These relations are not limited to trade alone, today we are talking about investment." He announced that the Egyptian minister of tourism, Hisham Zazou, plans to visit the Kurdistan region of Iraq this month. Osman stated, "We are waiting to sign an executive agreement between the Kurdistan region of Iraq and Egypt that deals with supporting and promoting tourism from Egypt to Kurdistan and vice versa. It will also include the establishment of investment projects in the tourism sector, especially after Erbil was chosen as the Arab Capital of Tourism for 2014," said Osman.