Iraqi Kurdish youth have reportedly been fighting alongside jihadists in Syria. 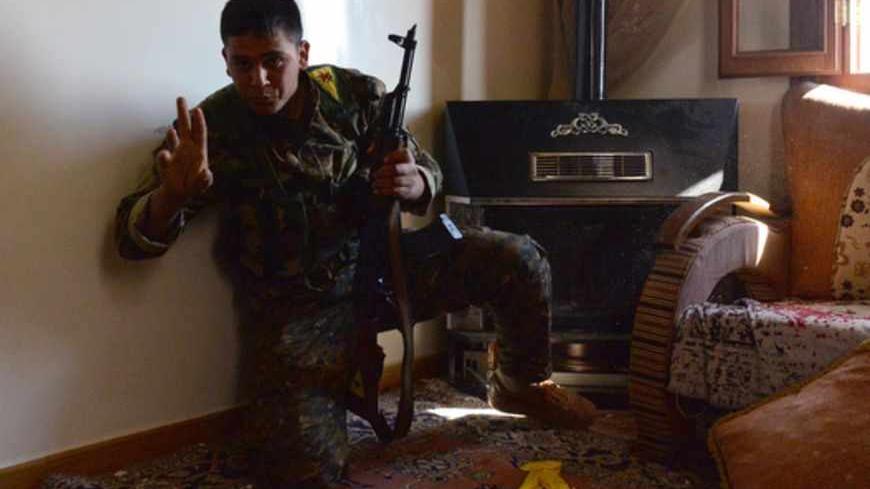 A Kurdish fighter from the Popular Protection Units (YPG) gestures after firing toward Syrian government forces inside a building in the majority-Kurdish Sheikh Maqsud district of the northern Syrian city of Aleppo, on April 21, 2013. - MIGUEL MEDINA/AFP/Getty Images

In the Kurdistan Region of Iraq, the debate continues in the Kurdish press over the involvement of young Kurds in the Syrian revolution. This comes four months after the announcement of the death of a young Kurdish man — a resident of Sulaimaniyah, a city located in the Kurdistan Region of Iraq — in Aleppo. The press is currently reporting that Syrian Kurdish parties captured a number of Kurdish youths after they went there to wage jihad.

In February, the Kurdish newspapers published news of the death of a young Iraqi Kurdish man studying pharmacology at an Indian university who left his studies and went to Syria to assist fighters against the Syrian regime. His name was Howkar Muhammed Kurdi. According to the blog of foreigners in the Syrian revolution, he was “a 25-year-old martyr from Sulaimaniyah in Iraq and a student of pharmacology at the Rajiv Gandhi University. He decided to abandon his studies, go to Syria to join the ranks of his brethren and provide them with medical assistance. He was martyred in a raid on Aleppo on Feb. 12 [2013].”

More than three months after this incident, the official website of the Kurdish Democratic Union Party (PYD), an armed Syrian Kurdish party, said that in the village of Ain al-Abd near the Syrian-Turkish border, they had captured five militants from Jabhat al-Nusra, including three Kurds from the city of Kirkuk.

It said that 11 individuals were killed in clashes in the village and five members from Jabhat al-Nusra were captured, one of which being a Saudi national, another European and the other three Kurdish Sorani from the city of Kirkuk.

The PYD is a Syrian Kurdish leftist opposition party that follows a similar ideology to the anti-Turkey Kurdistan Workers Party (PKK). The PKK is led by Abdullah Ocalan, who is currently serving a life sentence in a Turkish prison.

Jabhat al-Nusra is considered a jihadist group. It is a Salafist jihadist organization formed in late 2011 during the Syrian conflict. Its capabilities quickly grew, making it a leading revolutionary and strong force against the army of the regime of President Bashar al-Assad in a matter of months. This is due to the fighting experience and training of its members. The group has claimed responsibility for several suicide attacks in Aleppo and Damascus.

Islamist parties in Iraqi Kurdistan avoid delving into this topic or saying that young Kurds have gone to Syria for jihad. However, their close associates deny that the issue is a systematic problem.

Sheikh Ali Bapir was arrested by US forces on July 10, 2003, while on his way to the hotel Ishtar in the Dukan summer resort in an ambush near the village. He was arrested with three other leaders of the group and ten of his bodyguards. They were immediately moved by three helicopters to Mosul, then to a prison at Baghdad airport.

Bapir spent 22 months in detention, and his companions served various sentences ranging between several days and weeks, and 11 months.

The Islamic Movement of Kurdistan also has a presence in the Kurdistan Region. It was founded in 1987, has two seats in Kurdistan’s parliament and a minister in the KRG.

In a statement to Al-Monitor, the Islamic researcher Mohammed Baziani, head of the al-Huda Center for Strategic Studies, founded in 1998, said that there is a number of young Kurds in the ranks of the Syrian opposition. He stressed that their participation is based on defending the rights of the oppressed after the Syrian uprising has continued for so long.

He added, “The Kurds’ suffering throughout history is the main reason behind the participation of the youth in this war. They understand the suffering of the Syrian people as a result of the injustice against them.”

Nevertheless, he minimized the importance of their participation, and added, “According to our information, there is a small percentage of youth who embrace jihadist thinking and who would like to wage jihad against the Syrian regime; they can be counted on the fingers of one hand.”

He also indicated that the Kurds in Kirkuk are influenced by Salafist and jihadist groups, which are active there. This is in addition to their proximity to Arab Sunni areas, where the Naqshbandi group is active.

It should be noted that the Naqshbandi group, or the Army of the Men of the Naqshbandi Order, is a group that was announced after 2003, and appointed Izzat Ibrahim al-Douri, vice president of the former regime, as its emir. This group is believed to be linked to armed operations taking place in some of the disputed areas between the central government in Baghdad and the KRG in Erbil. The group is active in the provinces of Kirkuk, Diyala and Saladin.

Yassin Aziz, a political analyst interested in Islamic groups and a former leader of the Islamic movement of Kurdistan, stressed the need for Kurdish leaders in the Kurdistan Region to give greater attention to the issue of young Kurds from Iraq going to wage jihad in Syria.

He told Al-Monitor, “We need to know that there are different ideologies in Iraqi Kurdistan, and the KRG needs to rationally deal with that. Yet they only care about the nationalist side in the Kurdistan Region, knowing that there are many other movements, particularly Islamic movements, in Syria.

“The KRG is interested in the Kurdish parties in Syria. More than 100,000 displaced Syrians and refugees have fled to the region. They are all from the Syrian Kurdish areas, which they call Western Kurdistan, considering it to be a part of Greater Kurdistan, which is split between its southern part in Iraq, eastern part in Iran and northern part in Turkey.”

Massoud Barzani, president of the Kurdistan Region of Iraq, is said to have trained Syrian Kurdish militants in order to enable them to protect their areas in that country.

Aziz reiterated: “It is humanitarian sympathy on the part of the young Kurds, after the rule of Bashar al-Assad has continued for so long, and has hit the opposition with all types of weapons. This has caused the world to have sympathy for those who are being oppressed and has given the Syrian opposition an Islamic character.”

According to Aziz, the jihadist idea dates back to 1978 in Iraqi Kurdistan, when a Kurdish group formed the Army of the Quran and Muslim League. The group lasted for a very limited time, during which military conflicts erupted between it and secular parties, until the Islamic Movement of Kurdistan was established in 1987.

Abdel Hamid Zebari is a contributing writer for Al-Monitor’s Iraq Pulse. A reporter from Erbil who works in print and radio, he has published several reports in local and international media, including Agence France-Press and Radio Free Iraq (Radio Free Europe).