Some young Iraqi Kurdish men are being lured by al-Qaeda's call for jihad in Syria, even if it puts them into combat with their Kurdish brethren. 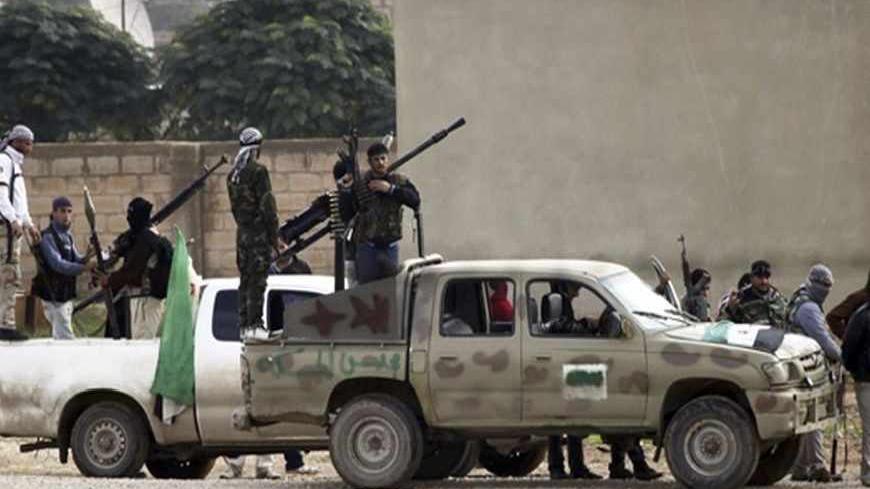 Members of the Free Syrian Army gather as gunfire is heard between them and the armed Kurds of the Kurdish Democratic Union Party (PYD), in the northern Syrian town of Ras al-Ain, Nov. 25, 2012. - REUTERS/Amr Abdallah Dalsh

On Aug. 17, Abu Jihad picked up his cell phone near Aleppo in Syria and dialed a number in Halabja in Iraqi Kurdistan. Abu Jihad was a messenger of death for the family of his co-jihadist friend, Osman Abdulrahim, 24, who had been fighting against the Syrian government forces for less than three months with the al-Qaeda-linked Jabhat al-Nusra.

The day before, Osman was killed in a building near Aleppo which was hit by a rocket-propelled grenade fired by government forces, according to Abu Jihad. He and other Jabhat al-Nusra fighters tried to transport him to Turkey for treatment, but Osman died en route.

Osman was among a growing number of jihadi Sunni fighters, including Iraqi Kurds, who are traveling to Syria in the name of “holy war.” The number of foreign fighters is estimated between 6,000 to as many as 15,000, according to media reports citing Western and Arab intelligence sources.

Ali, Osman's eldest brother who works for the Kurdistan Regional Government (KRG), sat down with Al-Monitor at the Sheikh Abdul Aziz mosque in Halabja on Aug. 25 to explain what he knew about his brother’s death.

“I was out, and it was around 8 a.m. when my sister called me and said someone had just called and wanted to talk to one of Osman's brothers.” Ali knew that Osman was with Jabhat al-Nusra in Syria. "I used to talk to him two or three times a week, and every time I told him to come back to Halabja, but he didn’t listen."

Ali had dialed Abu Jihad’s number — obtained by Al-Monitor and starting with +90, the Turkey's international dialing code — and was told of his brother’s death.

Halabja itself is not alien to jihadist ideology and Islamist foreign fighters. From the late 1990s until February 2003, Halabja’s border with Iran was controlled by an extremist Islamic Kurdish group called Ansar al-Islam, which consisted of foreign fighters who had fled Afghanistan during and after the 2001 war in the wake of 9/11. Halabja is still considered a stronghold of Islamic political parties in Kurdistan.

According to his brother, Osman was a devout Muslim who recited the Quran on a regular basis and was a fervent believer in the Islamic duty of jihad. Osman’s education was limited, having only completed four years of primary school before dropping out due to the international sanctions on Iraq, and the severe financial strain it imposed on millions of Iraqis. He did not watch much TV except for the news.

Ali claims that Osman told no one that he was going to Syria in early May, including him. However, Osman called Ali one week later to inform his brother that he was in Syria to perform jihad. Prior to that, he had been a laborer in a nearby mosque and managed to save up just over $1,000. "That morning, when Osman left, he was short of money and asked to borrow 300,000 Iraqi dinars (about $250) from my father," Ali recalled.

Arsalan, Osman’s first cousin and close friend, noted some behavioral changes in Osman prior to his departure to Syria. "Sometimes, Osman would look at the contents of my cell phone and delete music and some photos, and he would say they are not Islamic," he told Al-Monitor, standing next to his cousin Ali at the Sheikh Abdul Aziz mosque.

It was this sense of self-righteousness, the feeling that he was following the true teaching of Islam that pushed Osman and many others to go to Syria. Before he died, he told his brother Ali that there were around 70 Kurds from Iraqi Kurdistan in the ranks of Jabhat al-Nusra.

Less than a week after Osman's death, Rabar Tariq Maroof, 17, from Halabja was also killed near Aleppo. One of his former teachers, who did not want to be identified, told Al-Monitor that Rabar had recently finished the fifth-grade exams at the private Halabja Shaheed secondary school. The school where Rabar studied is run by the Turkish Islamic Fezalar group which has close ties with the powerful Islamic Turkish scholar Fethullah Gulen. It is unclear whether the school, which attracts the brightest in the area, had any influence in the radicalization of young Rabar.

What is certain is that during the last month of fighting in Ras al-Ain in northern Syria between the armed wing of the Kurdish Democratic Union Party (PYD) and Jabhat al-Nusra fighters, Rabar’s passport was left behind and published by the PYD in the Kurdish media, to prove that Iraqi Kurdish jihadists were fighting against their brethren in Syria.

Iraqi Kurds have largely supported Syrian Kurds in their efforts to clear their area of Assad forces, the Free Syrian Army and jihadists groups such as Jabhat al-Nusra. In recent days, the KRG and the public have provided shelter to thousands of fleeing Syrian Kurdish refugees. Almost everyone in Iraqi Kurdistan, including the main Islamic parties, disapproves of the actions of young Kurdish men who join groups such as Jabhat al-Nusra, especially if they fight against Kurdish nationalist groups such as the PYD. While it is difficult to ascertain exactly how many Iraqi Kurds have gone to Syria for jihad, reports in Kurdish media suggest that the number is growing.

While Rabar and Osman came from two different backgrounds, they both believed in the same interpretation of jihad, even if that meant they had to lie to their families to reach Syria.

The responsibility of informing his mother about Osman's death weighed particularly heavy on Ali. She did not know her son was in Syria, for Ali had told her that Osman was in Greece on his way to Western Europe. Ali wanted to be completely sure before delivering the devastating news to his mother, who was still mourning her other son's death in a car accident in 2012.

Ali asked if Abu Jihad, who also claimed to be from Halabja, could provide any photographic evidence of his brother’s death. Abu Jihad agreed to send a photo of Osman's body via Facebook — a photo obtained by Al-Monitor. “I swear to Allah that I buried him with my own hands," Abu Jihad assured Ali.

Ali waited for three days before delivering the devastating news to his family. When the moment came, his mother and sisters screamed and cried hysterically, their worst fears about Osman come true. “I thought she would not be able to cope with the fact that Osman was gone. I even expected her to be hospitalized, but she is doing better now, even though she is still mourning,” Ali said.

Al-Monitor called Abu Jihad's number provided by Ali on Aug. 26. Someone speaking with an Iraqi Kurdish dialect answered the phone and stated that he had never heard of Abu Jihad or Osman before disconnecting.