Asmaa al-Ghoul reports from Gaza on claims that Palestinian jihadist Salafist militants are fighting on the side of Jabhat al-Nusra in the Syrian civil war. 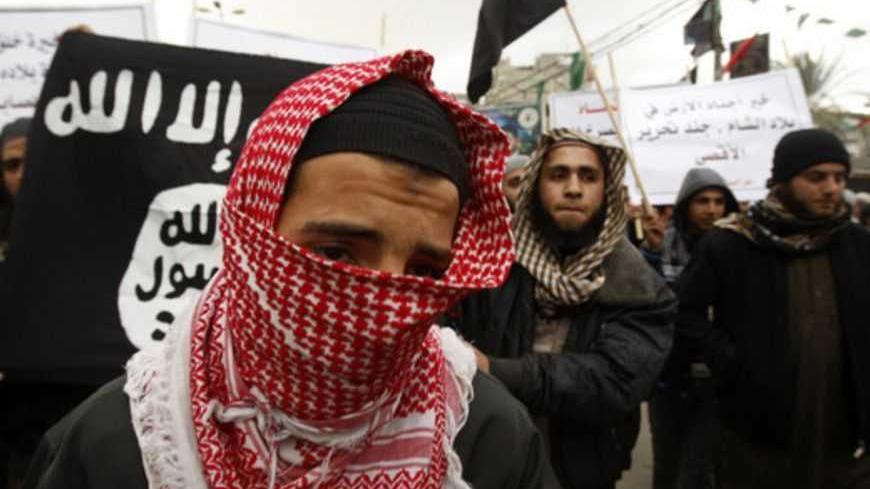 I managed to reach the house of one of the jihadist Salafist leaders in the Gaza Strip. The Hamas-led Gaza government had imposed limitations on most jihadist Salafist leaders following the Ibn Taymiya Mosque incidents in Rafah at the end of 2009, when its security forces killed 28 jihadists after their leader, Abdel Latif Moussa, declared the Islamic caliphate. Salafist jihadism in the Gaza Strip is an international movement that promotes armed jihad against the ruling Arab and foreign governments.

The only way to reach the house of the leader, who was forbidden from talking to the press, was by being disguised as a devout woman. Then I revealed my identity as a journalist, after which the Salafist leader's family kicked me out. However, he explained why the members of the movement had moved to Syria to fight, saying, “They moved to Syria because the jihad door in the Gaza Strip was closed, and the situation was not taken into consideration, contrary to Syria, where it is open to jihad and to fighting the enemy.” He refused to define what he means by enemy, and he noted that after he was locked up more than once in the aftermath of Ibn Taymiya Mosque incident, he sought to live a simple life and to keep his jihad mission and vocation as a member of the Salafist jihad between God and himself.

When asked if he is considering going to Syria himself, should he get the chance, he replied, “I prefer to keep this to myself.” Regarding the movement’s connection with al-Qaeda, the leader said that both organizations share the same approach, which calls for unity and jihad in the name of God, adding that only their names differ. Moreover, he said what differentiates them from other Salafism movements is that they abide by the religion as a whole, following the ideology of Sheikh Muhammad al-Maqdisi.

Despite his reluctance to talk or to disclose the number of militants from Gaza in Syria, he ultimately provided some information about their presence and efforts against the regime in Syria, independent of the Free Syrian Army. The militants joined Jabhat al-Nusra, which was formed in 2011 in Syria and was classified by the US as a terrorist organization.

On leaving the house of the Salafist leader, who insisted on remaining anonymous, I was able to get an interview with the families of two Salafists who had participated in the battle in Syria, and who were declared dead by al-Qaeda affiliate Jabhat al-Nusra on the Internet.

When I reached the house of the deceased Muhammad Qunayta, his brother refused to talk to me, despite having earlier confirmed the meeting.

However, the women poured their hearts out to me, expressing their sorrow for the sudden and tragic death of their son.

The sister of the deceased said, “Before he traveled, he was watching several videos from Syria and bitterly crying for the souls of children, women and wounded people. Then, he told us he was going to Turkey for trade purposes. We found out later that he went to Syria to carry out a martyrdom there.” She added that her brother’s conscience pushed him to fight in Syria. In his last days, he used to repeat, “My conscience cannot rest with all this injustice in Syria.”

Qunayta’s sister added that he was married with three kids. The family watched the video of the “massive” funeral and burial of their son, who was considered a leader and trainer, in Syria online.

A source close to the family told me that Qunayta was openly affiliated with al-Qassam Brigades, the military wing of Hamas. However, his membership was suspended during the last period of his life, because he traveled to Syria and joined the ranks of jihadists. Still, the movement handled his funeral service, out of respect for his history.

I also spoke with Hamas’ spokesperson, Sami Abou Zahri, over the phone. Zahri emphasized that Hamas does not interfere in any Arab or Islamic affairs. Although it stands by the Syrian people in fulfilling their will, it does not consider itself part of the conflict.

When asked about the Salafist leader’s accusation of Hamas closing the door of jihad and oppressing members of Salafist Jihadism in the Gaza Strip, thus pushing them to leave for Syria, Zahri replied, “Hamas limits its confrontations to the Israeli occupation and considers the liberation of Palestine its main mission. Those who claim that the doors to jihad are closed are mistaken, and the last war on the Gaza Strip is the biggest proof that they cannot be trusted. None of those members participated in the confrontations with the Israeli occupation, whether during the last war or the one before.”

Zahri added that there are many Salafist groups in Gaza. If you visit the jails or ask the human rights organizations, you will know that none of the members are in prison. In fact, they are free to work in Gaza.

I was on my way to Rafah city, south of Gaza Strip, when the family of the deceased Osama Ahmad Qashta canceled the interview, saying that the case was too sensitive. However, Fahid Qashta, a relative who was also Osama’s friend, told me over the phone that Osama was not affiliated with any Palestinian organization. Described as an extremely peaceful person, he lived in Misrata in Libya, where he was a teacher. He was also married with one child, called Abdel Ghani. However, circumstances pushed him to take part in the jihad when the Libyan revolution broke out. He later stayed in Gaza Strip for a while and visited his relatives.

Qashta added, “I did not notice any changes in his complexion, and his beard was always shaved. However, in his last days, his beard appeared long in some photos we took. Most of his family members have a long beard, though. This does not necessarily mean that he became Salafist.”

Qashta clarified that the martyr Osama returned to Libya, and then traveled to Syria by land to participate in the jihad. Qashta expressed his anger toward the claims spread on the Internet after his relative’s death saying that he was close to a Hamas leader. He denied any knowledge of Osama’s partisanship to Jabhat al-Nusra in Syria, which declared him dead over the Internet.

In a coffee shop in Gaza, Muhammad Hijazi, an expert on Islamic and Salafist groups, explained that Salafist jihadism is a global phenomenon, not a local one. It moves from certain regions of tension to others. It moved from Afghanistan to Iraq, then to Libya. He noted that its mission, at the beginning of the '80s, was to fight the Soviet Union. However, after the Soviet withdrawal from Afghanistan, Salafist jihadism took its mission to the socialist South Yemen. After the region fell to North Yemen, the Salafist jihadists moved to Chechnya, Caucasia and Sudan, then to Algeria, Iraq and Libya and now Syria.

Hijazi said the members are getting to Syria through Iraq and Turkey, since the border is open. Many of them are currently involved in Jabhat al-Nusra. Salafists in Jordan constitute around half of the total number of militants in Syria, amounting approximately to 4,000 fighters and residing in rural areas.

Moreover, he noted that they are financed by Gulf and Islamic charities, especially in Saudi Arabia. The Wahhabi ideology intrinsically supports this dogma, while some countries, like Qatar, are using Salafists for political ends and jihadist purposes. Hijazi considered unofficial political oil money to be the biggest sponsor for such movements.

Hijazi added that Salafists in Gaza are supported by an international network of small associations, whose mission is to offer logistical support. Those provide individuals with money and means to move to regions of tension. Through them, Salafists get salaries, visas and tickets and are directed to the conflict regions, where there is a political vacuum. The associations make sure to help them move around easily, and often, the countries that are the source of financing are aware of that. He said he considered Syria a favorable environment, where this trend that opposes the revolution’s principles of liberalism can constantly grow, as long as money and weapons are available.