Al-Qaeda's decision to cut ties with the Islamic State of Iraq and al-Sham (ISIS) continues to polarize the global jihadist network, with Gaza's Salafists siding with the latter. 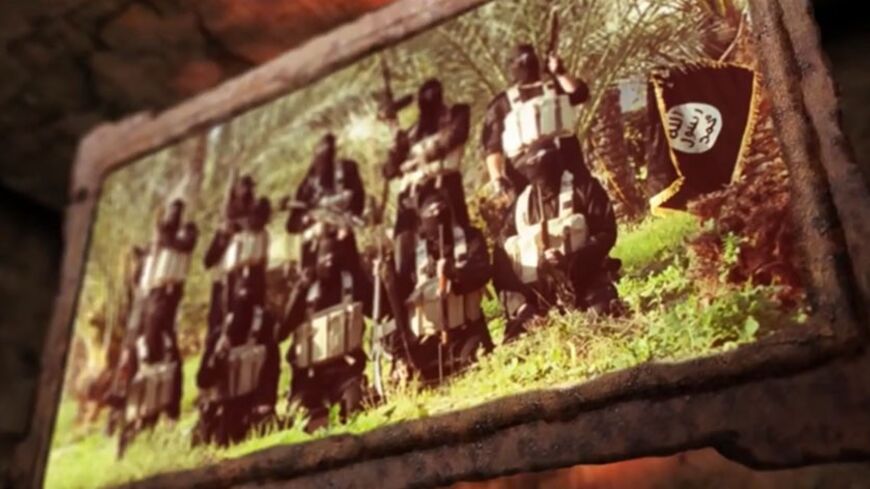 A screen grab from a video that spread on social networking sites and local news agencies shows purported Salafist jihadists affiliated with al-Qaeda meeting in the Gaza Strip to offer support to the Islamic State of Iraq and al-Sham (ISIS), Feb. 11, 2014 - YouTube

GAZA CITY, Gaza Strip — It seems Ayman al-Zawahri’s statement on Jan. 22 disavowing Abu Bakr al-Baghdadi’s Islamic State of Iraq and al-Sham (ISIS) had very little impact on the Salafist jihadist organizations operating in the Gaza Strip. The most prominent among those organizations, the Mujahedeen Shura Council in the Environs of Jerusalem, quickly issued a statement on Feb. 2, asserting that they were “committed to helping ISIS and bolstering its ranks.” The statement added that the infighting taking place in Syria was due to “an unfair view toward ISIS and its emir, the Prince of Believers Abu Bakr al-Baghdadi.”

Not long after, a video spread on social networking sites and local news agencies showing purported Salafist jihadists affiliated with al-Qaeda, meeting in the Gaza Strip on Feb. 11, to offer support and pledge allegiance to ISIS.

In the video, dozens of armed black-clad men were seen carrying various types of weapons, their bodies arrayed with explosive belts as they stood in front of a backdrop of palm trees, with an al-Qaeda flag by their side. The video started with a written phrase that read, “Jerusalem champions the Islamic State of Iraq and al-Sham,” with no further evidence indicating the location of where the clip was shot.

The video then moved on to a reading of some Quranic verses urging Muslims to help one another and proclaimed that some countries were fighting against the establishment of an Islamic state and exploiting the media to falsify facts against the establishment of such a state. The video’s participants further declared that they were ready to fight and help their brethren in their quest: “Your armies in Syria and Iraq, are joined by this army of the environs of Jerusalem, which shall champion you undeterred by its fight against the Jews.”

On Feb. 17, a poster appeared during a funeral that read: “The Islamic State of Iraq and al-Sham, headed by Abu Bakr al-Baghdadi, extends its heartfelt condolences and sympathy to the esteemed Lebed family.”

On a visit by Al-Monitor to the grieving family’s home, Khaled Lebed, who is clean-shaven and the brother of the deceased Nahed Lebed, affirmed that they were surprised to see the poster and immediately removed it from the condolences tent erected in front of the house.

“My brother, who died as a result of a disease, was a school director and had nothing to do with them. I did not see who hung up the poster, for hundreds of mourners were present. We immediately removed it, but not before one of those present took a cell phone photo,” he noted.

Al-Monitor was unable to reach any of the gunmen who swore allegiance to ISIS, because they feared that any public appearance by them would lead to their arrest by the Gaza government’s security agencies, particularly considering that many members and leaders of Salafist factions have been harassed lately.

However, Al-Monitor did meet with one of the leaders of these Salafist factions affiliated with the global jihadist organization, who requested anonymity for the same security concerns. Commenting on the video clip, he said, “The video is real and was shot in the Gaza Strip by young men primarily driven by emotions to come to the aid of our brothers in Syria.” He considered that the announcement of their presence in the video and the poster was an indication that the organization had spread beyond Iraq and Syria to reach Palestine.

He also stressed that the Salafist factions in the Gaza Strip and ISIS agreed in substance on the need to establish an Islamic state, and expressed sadness for the infighting taking place between ISIS and other Islamist factions. “Whether they belonged to ISIS, Jabhat al-Nusra or Ahrar ash-Sham, we only ask God to unify their ranks because they are all my brothers. ISIS is my right eye and Jabhat al-Nusra my left eye. What is occurring is but a strife similar to the one that took place between the companions of the Prophet Muhammad [in the early days of Islam], and it may take some time to resolve because we all agree on the need to do away with the harbingers of apostasy whether they be in Syria or China.”

He explained to Al-Monitor that the news disseminated by the media about people fearing ISIS in the Gaza Strip was untrue. “I have never met anyone who rejects them outright. For the establishment of an Islamic state is a great endeavor, and whomever stands against it is either a hypocrite or a disbeliever. Lest we forget that the Prophet Muhammad, peace be upon him, said that the Islamic caliphate would arise in the Holy Land,” he noted. He also asserted that ISIS’ emergence as an organization in the Gaza Strip would serve to add diversity to jihadist actions.

There is no ISIS

On the other hand, Hamas, the government and the movement rejected the whole matter altogether. In a meeting with foreign press correspondents held on Feb. 24, Deputy Prime Minister Ziad al-Zaza dismissed talk of ISIS’ existence in the Gaza Strip.

“ISIS will never exist here. It is only found in Iraq and the Levant, and there are no indications that the video clip was shot in Gaza. As for the poster, anyone could have printed and hung it, since social networking sites are open to all and facilitate access to these groups,” Zaza said at the meeting in response to a question by Al-Monitor’s correspondent.

Hamas spokesman Sami Abu Zuhri concurred. “There is no such thing as ISIS in Gaza, and there are no indications that this organization exists here,” Abu Zuhri told Al-Monitor.

Mohammed Hijazi, an expert on Islamist groups, believes that ISIS is primarily concerned with Iraq and then Syria. Consequently, he thinks it's unlikely that it has an organizational presence in the Gaza Strip. “The official ISIS spokesman in Syria recently returned to his family and home in southern Gaza. But this does not mean that ISIS has emerged in the Gaza Strip. There are scores of Salafists in Gaza, some of whom went to fight alongside ISIS and others alongside Jabhat al-Nusra. Yet, this does not mean that those who returned now wanted to form an ISIS branch in Gaza.”

Hijazi thought that the difficulty was “Hamas not allowing such an eventuality to occur because it considered itself political Islam’s representative in the Gaza Strip, and because ISIS’ primary goal is to establish a state in Iraq and the Levant. Let’s not forget what happened to Abdel Latif Moussa, who was killed by government forces less than 24 hours after he proclaimed the establishment of an Islamic emirate in the city of Rafah.”

Hijazi also believed that there are individual ISIS members in the Gaza Strip, but no organizational framework: “Some young people are positively welcoming this idea that is spreading through the Internet and via video clips, particularly considering that unemployment is rising and the blockade is intensifying. These youths are therefore proclaiming their sympathy and allegiance, but their numbers do not exceed the single digits, and their emergence as a dangerous organization is unlikely, because it would entail fighting the current government for power and influence.”