A prominent pro-Islamic State Salafist leader in Gaza says the militant group refused pledges of allegiance from jihadists in Gaza because of disagreements and divisiveness among them. 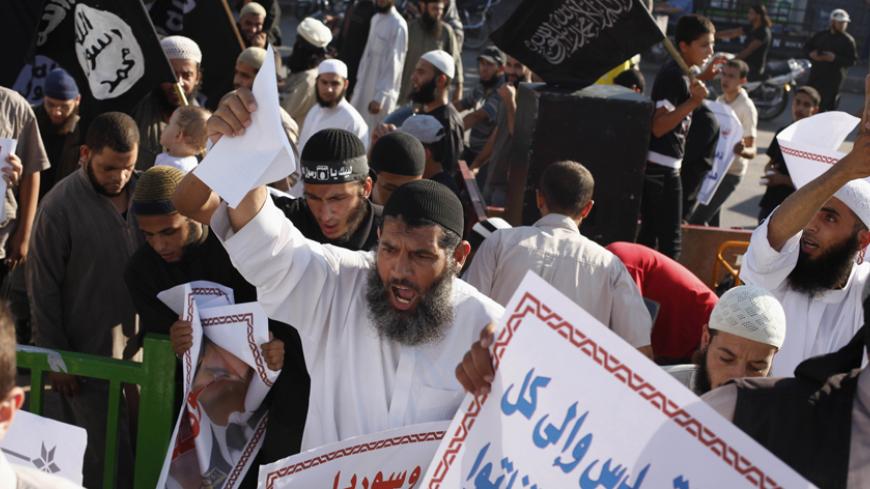 GAZA CITY, Gaza Strip — On Feb. 2, 2014, the Mujahedeen Shura Council in the Environs of Jerusalem in Gaza issued a statement announcing that it was “committed to helping ISIS and bolstering its ranks.” Nine days later, another Salafist jihadist group posted a video announcing its support for the Islamic State of Iraq and al-Sham, now the Islamic State (IS). By the end of 2014, things appeared to have moved beyond mere support, as Al-Monitor met with Gazans who claimed to be affiliated with IS, although, according to the spiritual leader of pro-IS youth in Gaza, IS had rejected their pledge of allegiance.

Abu al-Walid, 63, a leading IS sympathizer in Gaza, told Al-Monitor during a meeting at his home in southern Gaza, “Caliph Abu Bakr al-Baghdadi has not accepted the allegiance of any Salafist individuals or groups in the Gaza Strip.” Abu al-Walid, considered the “spiritual father” of young IS sympathizers in Gaza, further stated, “Since we are dispersed and divided as jihadist groups, Baghdadi did not accept our allegiance although we reiterated it.”

He explained that Baghdadi is aware of various disputes among Salafist groups in Gaza and clarified that Ansar Bayt al-Maqdis in Sinai deserved their allegiance to be accepted, because they had managed to organize 19 Salafist groups under their flag and carry out operations on the ground.

Abu al-Walid asserted that the dispute between IS and al-Qaeda has affected the jihadist community in Gaza, stating, “Salafist groups have become divided, and they have tarnished IS’ image in the Gaza Strip, even more than Hamas has, due to the dispute between IS and al-Qaeda.” He also said, however: “There is an IS-affiliated group in the Gaza Strip, and it is not a bunch of divided individuals. Hamas and all Salafist groups are well-aware of this.”

Hamas deputy leader Mousa Abu Marzouk told Al-Monitor during a news conference Dec. 8: “IS militants are not present in the Gaza Strip. Some youth are adopting ideas under the pressure of the current circumstances, but if the situation changed, they would too.”

Abu al-Walid, who has in his library the series of fatwas by the 13th century Islamic scholar Ibn Taymiyyah, a principal authority for Salafists, revealed that he is in touch with IS over the Internet, but is reducing his activity because of heightened surveillance. “Even [believing in Salafist] ideology and belonging [to a Salafist group] are punishable by arrest by Gaza’s security services. We can no longer gather in study groups as we did in the past,” he said. The security forces summoned Abu al-Walid about a year ago.

Abu al-Walid openly stated that he had contacted Ansar Bayt al-Maqdis online in the past, but that their last contact had been in 2012. He also said that if he were younger, he would have traveled to wage jihad.

“More than 100 men from Gaza Strip went to fight alongside IS, and some of them were part of my study group. One of them cried here in this room and told me that I was forbidding him from going to heaven because I preferred that he fight in Gaza instead of traveling to fight abroad. Fighting Jews here is also jihad,” Abu al-Walid said.

He denied having any links to any bombings or threatening statements issued in IS' name in the Gaza Strip. “Salafist groups have nothing to do with the bombings of Fatah houses and the French consulate. These rumors aim at tarnishing the image of IS and pushing people away from it. We do not have the freedom of worshiping and giving sermons in mosques, and subsequently, we do not have the freedom to carry out bombings,” he stated.

The French Cultural Center was targeted in two attacks, in October and December 2014. Another series of explosions occurred near the residences of Fatah officials, and yet another one during a ceremony marking the 10th anniversary of Yasser Arafat's death, all on the night of Nov. 11. Responsibility of these attacks were claimed in statements bearing IS’ name.

A go-between informed Al-Monitor that Abu al-Hareth, 26, a leader in Abu al-Walid’s study groups, had helped Noureddine Issa and Chadi al-Dahoudi, two jihadists killed in Syria in November, get out of Gaza to fight alongside IS. Previously, Abu al-Hareth had been known among his neighbors for his long hair.

Al-Monitor went in search of Abu al-Hareth but did not find him at his home. His mother told Al-Monitor that he would not be returning and that he had shut off his cell phone. His father said: “My son and I have not been on good terms lately, and I have even deleted his number from my phone. He was brainwashed after he joined the Salafist jihadist movement.”

Speaking to Al-Monitor Dec. 27, Abu al-Hareth’s mother she did not wish any trouble for her son. “Around a month ago, he was locked up in the security jails managed by Hamas because of a statement he distributed at the mosque,” she said.

She produced a copy of a statement bearing the IS logo and read it aloud: “Your Salafist jihadist brothers in Bayt al-Maqdis have nothing to do with yesterday’s local bombings that targeted the doors of some houses.” The statement asserted that the bombings were part of a systematic media campaign aimed at tarnishing the image of Salafist jihadism around the world.

Al-Monitor had met with another pro-IS activist, Abu Muaz (a pseudonym), Dec. 17 in Gaza. He wore a black mask that covered his entire face and head except for his eyes. Two other men accompanied him, one of whom was armed.

Abu Muaz began our meeting with an elaborate religious introduction and then proceeded to answer the most probing questions with “No comment.” He seemed worried. After the meeting, one of the other men said, “The security situation in the Gaza Strip does not tolerate delicate statements.”

Abu Muaz denied that IS had been behind a Dec. 1 statement issued in its name and posted on social networking threatening to kill a group of authors if they insulted Islam. Abu Muaz stated: “They are untrue. Statements should be issued by IS’ Council of Brothers, and I do not expect the issuance of any statements that are not in line with Shariah law and that threaten civilians and dhimmis [non-Muslims living in an Islamic state].” Abu Muaz added that he did not consider Gazan society an enemy.

An official in the Gaza City security services, still under Hamas, confirmed to Al-Monitor on condition of anonymity that the scattered structure of jihadists in Gaza made it difficult for pro-IS cells to be taken seriously. “Their structure is unlike the hierarchical organizations of the rest of the political Islamist groups, where a single person is in charge. Each Salafist group has an emir, and the groups compete with each other,” he said, adding: "We will never allow these groups, especially those that pledged allegiance to IS, to work on the ground, as these will cause great chaos and infighting, especially with parties known for their proximity to Iran, such as Islamic Jihad.”

After our interview, Abu Muaz had returned to his four-wheel drive, looking at the ground. Throughout our meeting, his eyes had been lowered to avoid looking directly at me, although I wore Shariah-compliant attire. Abu al-Walid, on the other hand, remained seated on the porch of his house, like an average old man. He politely bid us farewell. One could not have imagined that this man only a few moments earlier had said that he considers slaughtering people a prophetic call, that “enslaving women is not an exaggeration in religion” and that “Yazidis are infidels deserving death.”