Dempsey says Iran’s role in Iraq might be 'positive'

Americans consider Islamic State, not Iran, as top threat to US in Mideast; terrorists in Syria planning “mass casualty attacks” in West; Salafists in Gaza look to Islamic State. 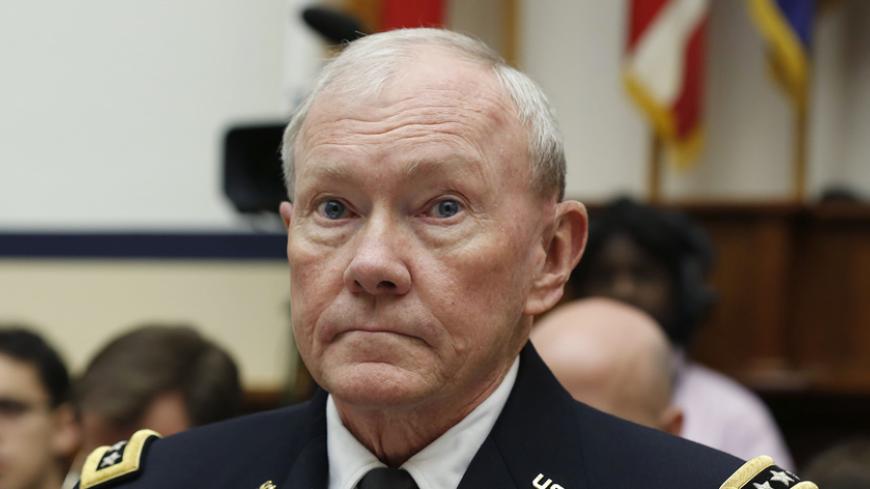 Chairman of the Joint Chiefs, US Army Gen. Martin Dempsey, listens to a question during the House Armed Services Committee on Capitol Hill in Washington, Nov. 13, 2014. - REUTERS/Larry Downing

Iran gets another "positive" from US

Gen. Martin Dempsey, chairman of the US Joint Chiefs of Staff, said on Jan. 8 that Iran’s influence in Iraq could be “positive.”

Dempsey, who spoke with reporters following a meeting at the Pentagon with Lt. Gen. Benjamin Gantz, chief of the General Staff of the Israel Defense Forces, said, “If it is a path that ties the two countries [Iran and Iraq] more closely together economically or even politically, as long as the Iraqi government remains committed to inclusivity of all the various groups inside the country, then I think Iranian influence will be positive. But what really matters is where it all goes, and we're watching that very carefully."

Last month, US Secretary of State John Kerry said that “the net effect is positive” of reported Iranian strikes against Islamic State (IS) targets in Iraq.

A poll directed by Shibley Telhami, Anwar Sadat Professor for Peace and Development at the University of Maryland and a nonresident senior fellow at the Brookings Institution, revealed that only 12% of Americans consider Iran the top threat to the US interests in the Middle East, compared to 70% for IS and 13% for the Israeli-Palestinian conflict.

A possible, if tentative, thaw in long-entrenched US hostility to Iran, at least relative to the threat from IS, comes as US Secretary of State John Kerry is slated to meet Iran Foreign Minister Mohammad Javad Zarif in Geneva on Jan. 14, followed by bilateral meetings between the US and Iran negotiating teams and then the political directors from the P5+1 (the permanent members of the Security Council and Germany) on Jan. 18.

Robert Einhorn, a former top arms control adviser in the Obama administration, told Laura Rozen this week that the talks have “become hostage to internal divisions in Tehran,” and that the Iran negotiating team has not been empowered to make the decisions necessary to move the negotiations forward.

Seyed Hossein Moussavian argues that the holdup in the talks is more likely the result of Israeli and congressional obstruction, rather than Iranian infighting. He writes that the door is already ajar to US-Iran collaboration in the battle against IS and terrorism:

“Obama’s recent remarks, including on the possibility of reopening of embassies, even if far-fetched at this moment, point to the direction that has to be taken, which, under the current circumstances, might take the form of quiet collaboration on fighting Salafist extremism and terrorism in the region. Such actual cooperation, preferably without fanfare, carries the potential for further expansion to include other regional hotspots and crises.”

Assad as ally against IS?

The three-day terror spree in Paris last week, which left at least 20 dead, including the three killers, may foreshadow a new chapter in the terrorist threat resulting from the war in Syria.

In a speech prepared before the rampage in Paris, Andrew Parker, director-general of the UK’s MI5 Secret Service, said on Jan. 8 that “a group of core terrorists in Syria is planning mass casualty attacks against the West” that aim to “cause large-scale loss of life.”

This column proposed in February 2014 a new regional security alignment among Syria and its neighbors focused on counterterrorism. US President Barack Obama outlined the need for new global counterterrorism alliances in a speech in May; we have said he should return to this theme.

In August, we wrote, “There is an all too obvious strategic rationale in recognizing that the Syrian military could be an asset in defeating IS, whose foreign fighters are now described as a threat to the US homeland. There may be a slow and quiet trend in this direction. While no one is calling for the West to embrace Syrian President Bashar al-Assad, especially given the crimes and excesses his government has carried out during the war, no one has ever accused Assad of being a threat to the US homeland, as is the case with IS, which is also a mortal enemy of the Syrian government.”

The United States need not deal with Assad directly, but can leverage the Iran-Syria-Iraq alignment against IS, as we wrote in September.

Telhami’s poll also reveals that while 70% of Americans are either “somewhat” (52%) or “very” (18%) convinced that the Syrian war cannot be resolved without Assad’s removal, a majority (60%) believe that the United States should not fight the Syrian army and should instead allow Assad’s troops to fight IS.

Some Syrians opposed to the Assad government are also reluctantly drawn to this view as a lesser of two evils. Edward Dark wrote in September: “The only alternative then appears to be an unpalatable and unholy alliance with the Syrian regime, the only force on the ground right now capable of taking on and defeating IS with any degree of success.”

Asmaa Al-Ghoul reports that’s Gaza’s disparate Salafist groups appeared to share support for IS and jihad in Syria, but are careful to distance themselves from acts of terrorism in the Gaza Strip. Hamas authorities are monitoring the groups but are downplaying the threat, at least for now.

“Hamas deputy leader Mousa Abu Marzouk told Al-Monitor during a news conference Dec. 8 that 'IS militants are not present in the Gaza Strip. Some youth are adopting ideas under the pressure of the current circumstances, but if the situation changed, they would too.’”

Ghoul reports further: “An official in the Gaza City security services, still under Hamas, confirmed to Al-Monitor on condition of anonymity that the scattered structure of jihadists in Gaza made it difficult for pro-IS cells to be taken seriously. ‘Their structure is unlike the hierarchical organizations of the rest of the political Islamist groups, where a single person is in charge. Each Salafist group has an emir, and the groups compete with each other,’ he said, adding: ‘We will never allow these groups, especially those that pledged allegiance to IS, to work on the ground, as these will cause great chaos and infighting, especially with parties known for their proximity to Iran, such as Islamic Jihad.’”

“‘The armed Salafist factions in Gaza are no longer restricted within the scope of individual currents, but have formed a united bloc.’ He added, ‘All the Salafist currents are following the Islamic State ideology, but have not yet pledged allegiance to it. Some fighters formerly affiliated with Ansar Bayt al-Maqdis and who joined IS have pledged allegiance to Caliph Abu Bakr al-Baghdadi and are fighting with IS. They have strictly adopted IS' ideology, and some of them were even killed [in Syria].’

“Maqdisi emphasized that all the Gaza currents are committed to supporting IS and will join its ranks in the future. For now, however, Maqdisi said, only those fighters who have left Gaza to fight for IS against those he called ‘enemies of God’ have pledged allegiance to IS.”

Salafist sources in Gaza reported that between 50-100 Gazans left to fight alongside IS.