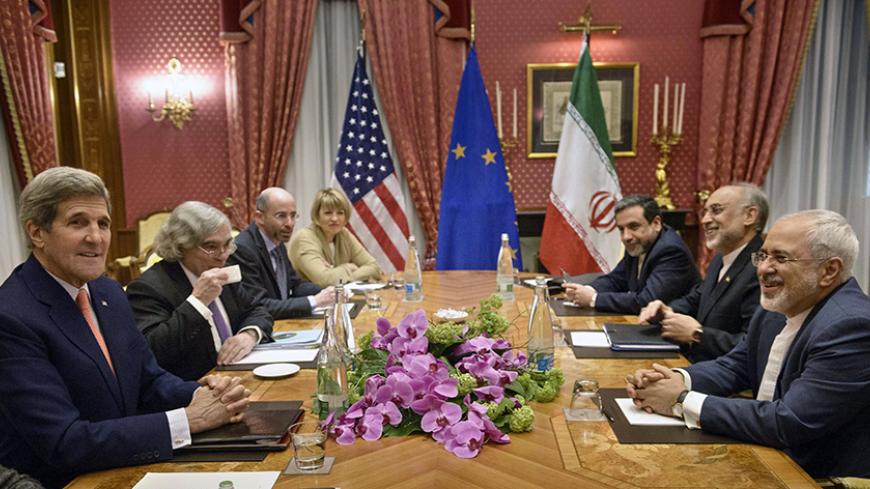 US President Barack Obama said on April 2 that the framework agreement reached between the six world powers and Iran represents “[a] historic opportunity to prevent the spread of nuclear weapons in Iran, and to do so peacefully, with the international community firmly behind us.”

As Laura Rozen reported from Lausanne, the result of marathon negotiations was a “far more detailed political agreement for a final Iran nuclear deal than had been expected.”

In Israel, Ben Caspit reports that Prime Minister Benjamin Netanyahu’s inner circle was “shocked into silence” before going on offense. Following a telephone call with Obama, Netanyahu railed against the deal, saying it “would legitimize Iran’s nuclear program, bolster Iran’s economy and increase Iran’s aggression and terror throughout the Middle East and beyond.”

In an exclusive interview with Al-Monitor, Maj. Gen. (Res.) Amos Yadlin, former head of the Israeli Military Intelligence, told Caspit, “If we had a prime minister who knows how to talk to the Americans and enjoyed the president’s trust, this would have been the time to jump on the bandwagon and demand clarification of all the points that require clarification. There are still things that can be achieved in this agreement. At the same time, this is the time to reach understandings with the Americans, and perhaps even to reach a parallel Israeli-US agreement, providing Israel with clarifications, assurances and perhaps even defense compensation for the risks it is taking. We did things like that after the peace agreement with Egypt and at different points in time, too.”

Some members of Congress were skeptical of the prospect of a completed accord between the six world powers by the June 30 deadline. Rozen reports that Bob Corker, Republican chairman of the Senate Foreign Relations Committee, said in a statement that the United States "must remain clear-eyed regarding Iran’s continued resistance to concessions, long history of covert nuclear weapons-related activities, support of terrorism and its current role in destabilizing the region." The Foreign Relations Committee will vote April 14 on the Iran Nuclear Agreement Review Act, which would require that any final agreement with Iran be subject to a 60-day review before the president could waive or suspend sanctions on Iran.

Sen. John McCain, chairman of the Senate Armed Services Committee, said, “Iran is clearly on the offensive across the Middle East. Its malign activities, from Iraq and Syria to Lebanon and Yemen, are provoking a regional sectarian conflict of massive proportions. We cannot, and should not, divorce our nuclear diplomacy with Iran from the larger strategic challenge that Iran poses.”

McCain is on target when he says that the nuclear agreement should not be divorced from the “larger strategic challenge” of Iran. However, progress in nuclear diplomacy with Iran offers the opportunity for comparable progress on regional crises. Some of these trends are already underway, and have been covered in detail by Al-Monitor.

Let’s begin with Iraq. Saddam Hussein’s regime invaded Iran in 1980, attacked its cities with ballistic missiles and used chemical weapons against Iranian forces. Thanks to the US liberation of Iraq from Saddam in 2003, Iran now exercises considerable influence among Iraq’s political leadership. The United States cannot shake Iran’s political influence on Iraq — Iran is and will be a player in Iraq, for better or worse.

The United States and Iran share an interest in assisting Iraq in repelling the Islamic State (IS) from Iraqi territory. As this column has pointed out, there is opportunity in Iraq’s crisis. Both US Secretary of State John Kerry and Gen. Martin Dempsey, chairman of the US Joint Chiefs of Staff, have said that Iran’s role in Iraq could be “positive.” While we can replay the back and forth in the retaking of Tikrit last week, the bottom line is that both Iranian militias and US airstrikes helped Iraqi forces retake the city from IS. This is not a US-Iran “alliance,” and US and Iranian forces did not coordinate their activities. But both countries took complementary actions based on shared interests.

On Syria, this column has argued that leveraging the alignment among Iran, Iraq and Syria against IS could, over time, complement the overtly Sunni sectarian coalition backing US airstrikes against IS. The opportunity for Iranian engagement in counterterrorism in Syria, providing humanitarian relief to the besieged Syrian people, and perhaps eventually implementing a long-sought political transition seems a more hopeful prospect than buying into the regime-change agendas of Turkey and other US allies.

The consequences of the latter, misguided approach were on display this week, when al-Qaeda-affiliated Jabhat al-Nusra played a prominent role in the retaking of Idlib province from Syrian government forces. This column warned in December 2013 that the emergence of the Islamic Front would be a “disaster for Syria’s opposition and future,” and lead to the mainstreaming of radical jihadist groups. So one can decide for oneself if the news of an al-Qaeda affiliate leading the charge in Idlib is good news for Syria and the region. The view here is to try to work with Iran and all regional parties to end the war and bring relief to Syria, rather than to mainstream terrorists.

Iran is also instrumental in whether there is peace or war on Israel’s border. Hezbollah and Israel have mostly maintained a deterrent relationship, as Caspit and Ali Hashem have reported for Al-Monitor. As this column pointed out in January, Hezbollah Secretary-General Hassan Nasrallah may have blurred the "red line" on Syrian President Bashar al-Assad when he said, “Even if the political solution means that Assad should go after the end of his term, this should be in coordination with him.” The point here is that an evolving US-Iran conversation about the lifting of sanctions that are targeted at Iran’s support of terrorism, would eventually lead to a conversation about Hezbollah’s role in Syria and Lebanon.

This brings us to Yemen, which is breezily characterized by critics of the nuclear talks with Iran as another Iranian scheme. No question that Iran’s backing of the rebel forces, in coordination with the intrigues of former Yemen President Ali Abdullah Saleh, has given Tehran a provocative foothold on Saudi Arabia’s border. But the Yemen crisis defies a simple Saudi-Iran storyline. The nature of the conflict is much more than a battle between Saudi and Iranian proxies. Yemen’s conflict is civil in nature and the battle lines are not just drawn along sectarian lines; they are also based on tribal and other allegiances with multiple parties grappling for power in a failing state.

The UN issued a statement this week that 519 people had been killed so far in the fighting, 90 of them children, and the Wall Street Journal reported that many Yemenis have begun to turn against Saudi Arabia because of the airstrikes.

Hashem reports that Khalid al-Madani, a Houthi official, insisted that the group is not backing down: “Nothing is going to stop us, and the Saudis have to understand that if they want to uproot Ansar Allah then they have to uproot all the Yemenis from their land … We are arranging and coordinating with the tribes, people believe in us; this is the first answer to the Saudi aggression that’s bound to fail.”

Maysaa Shuja al-Deen writes that the Saudi military intervention is “very costly for Yemen at a political and human level. The intervention will result in the destruction of the regular military force, which would impose a chaotic political reality in the absence of any military force likely to impose its authority, as well as with the presence of the Houthis in the north. This militia remains the most trained and organized, and there is a nucleus of a tribal militias in Marib, along with another nucleus of popular militias in Aden, which will create massive political chaos in Yemen. Political chaos in a country that stretches along half a million square kilometers and is inhabited by roughly 25 million people, resulting from the destruction of infrastructure and the killing of many civilians in violent raids, will drain Saudi Arabia post-battle, as Iran will still be able to find new areas of intervention in Yemen and get Saudi Arabia in consecutive whirlwinds.”

Netanyahu, Erdogan weigh in on Yemen

Israeli Prime Minister Netanyahu considers Iran’s role in Yemen further evidence of Iran’s threat to Israel and the region. Netanyahu dubbed the “Tehran-Lausanne-Yemen axis” as a sign of how the civil war in Yemen is now a security concern for Israel because of Iran’s backing of the Houthi movement.

Akiva Eldar writes that for Netanyahu, the complex situation in Yemen requires a “simple response” — blame Iran. While Israel has economic and security considerations in keeping Red Sea shipping lanes open, Jacky Hugi writes that it will be best for Tel Aviv not to look at the conflict through a moral lens: “The campaign there is not a fight between good Saudis and bad Shiites. It is a conflict over authority, power and wealth. In the ancient world, conflicts like this were known as tribal warfare.”

Turkish President Recep Tayyip Erdogan also went on the offense against Iran over Yemen last week, perhaps in an attempt to burnish his credential as a Sunni leader. Semih Idiz writes: "‘Iran is trying to chase Daesh from the region only to take its place,’ Erdogan said [on March 26], referring to the Islamic State (IS) by its Arabic initials. He maintained the same angry tone later in the day at a press conference in Ankara with Ivory Coast President Alassane Ouattara. ‘Iran is trying to dominate the region. This has started to bother us, the Gulf states and many countries in the region. It is really not possible to tolerate this,’ he said.”

Erdogan’s posturing comes less than two weeks before his April 7 visit to Tehran. Erdogan has until now been careful in his remarks about Iran, given the two countries’ economic ties. Fehim Tastekin reports that this may be part of a move to curry favor in the Gulf: “In this Saudi-led coalition, no one has been as explicit as Erdogan in voicing the hostile sentiments against Iran. The Saudi king seems to be leading the actual war, and Erdogan the war of words. It is an attitude aimed at strengthening bonds with Gulf states at the expense of burning the bridges with Iran, the country with which Turkey has had its most stable relationship.”