Observers are wondering why Erdogan is trying to drag Turkey into the region’s growing sectarian conflict. 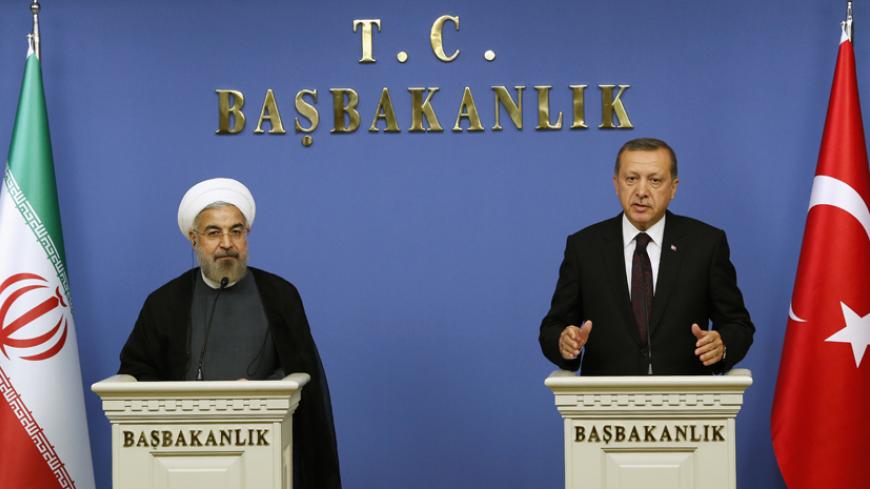 President Recep Tayyip Erdogan’s penchant for alienating regional powers manifested itself again last week as he took an unprecedented swipe at Tehran over its involvement in Yemen and Iraq. Indicating that Iran’s attempt at regional domination is “intolerable,” Erdogan said Turkey is prepared to give logistical support to the Saudi-led military strikes against Yemen's Houthis, who are backed by Tehran.

The fact that he is due in Tehran on April 7 for an official visit makes Erdogan’s outburst even more intriguing. It was not immediately apparent whether this was the impulsive Erdogan the world has come to know, acting on his own again and putting Prime Minister Ahmet Davutoglu in a difficult situation diplomatically, or if he was signaling a change in Ankara’s traditional Iran policy.

Erdogan also appeared to be moving close to Sunni leaders — including his nemesis, Egyptian President Abdel Fattah al-Sisi — who are trying to crush the Muslim Brotherhood, for which Erdogan feels a close affinity. It is therefore unclear whether Erdogan is changing tack in this regard.

Erdogan made his unprecedented attack against Iran during an interview with France 24 on March 26, when he also declared Turkey’s readiness to provide logistical support for an operation in Yemen. He said the Houthis and Iran had to withdraw from Yemen, and added that Iran was also aiming to increase its influence in Iraq.

"Iran is trying to chase Daesh from the region only to take its place," Erdogan said, referring to the Islamic State (IS) by its Arabic initials. He maintained the same angry tone later in the day at a press conference in Ankara with Ivory Coast President Alassane Ouattara. “Iran is trying to dominate the region. This has started to bother us, the Gulf States and many countries in the region. It is really not possible to tolerate this,” he said.

“Look at Iraq. They are struggling with Daesh and with the Revolutionary Guards Iran sent there at the same time. Iran has to withdraw its forces from Yemen, Syria and Iraq,” Erdogan said.

The Foreign Ministry in Ankara also issued a statement on March 26 supporting the operations against the Houthis. Its tone, however, suggested this support would be political rather than military. The ministry made no mention of Iran. It said, “We believe that this operation will contribute to the prevention of the threat of civil war and chaos that emerged and to the restoration of the legitimate state authority.”

Erdogan’s tone contrasted with that of the statement, leading to questions of whether his remarks were based on a strategy worked out in coordination with the government.

Hikmet Cetin, who served as Turkey’s foreign minister from 1991-1994, when Ankara’s ties with Tehran were strained by claims that Iran was trying to export its Islamic Revolution to Turkey, expressed doubts on this score. Pointing out to Al-Monitor that maintaining dialogue with Iran has always been important for Turkey, Cetin said he did not sense a coherent strategy behind Erdogan’s words.

Adding that Turkey ran the risk of being sucked into the maelstrom of the growing sectarian conflict between Sunnis and Shiites, with Saudi Arabia and its allies on one side and Iran on the other, Cetin also questioned the logic of Turkey’s taking sides in this conflict, given that it has millions of Alevi citizens.

Cetin, who also served as the NATO secretary-general’s representative in Afghanistan during 2003-2006, said, “Iran may have its regional ambitions, but during my time we always tried to solve our difference with [Iranian Foreign Minister] Ali Akbar Velayati through dialogue.”

Pointing to the strained ties between Ankara and Washington over issues relating to Syria and Iraq, Cetin also suggested that Erdogan may be trying to curry favor with the United States, which is also supporting the Saudi-led operation in Yemen.

Mustafa Aydin, a professor of international relations and the rector of Kadir Has University in Istanbul, shares this view and believes the “US factor can’t be overlooked when assessing Erdogan’s remarks on Iran.”

He is nevertheless sure that there is more to it, saying, “Erdogan is the president. He speaks for Turkey and his remarks can’t simply be brushed aside as impulsive outbursts,” and “Turkey and Iran have been in a state of unspoken rivalry for a long time. This was apparent in Central Asia and the Caucuses after the Cold War. Following the Arab Spring, it moved to the Middle East.” He went on to maintain that circumstances were forcing Ankara to speak out more openly against Tehran’s policies.

Iran did not take Erdogan’s remarks lying down, of course.

Iranian Foreign Minister Mohammad Javad Zarif’s response to Erdogan was calm but acerbic. “Those who have brought about irreparable damages from their own strategic mistakes, it is better for them to adopt responsible policies toward the existing capacities to create calm in the region,” said Zarif, referring to the series of political miscalculations by Ankara since the Arab Spring that have left Turkey isolated in the region.

“We attach importance and have respect for our strategic relationship with Turkey in various fields,” Zarif added, reminding Erdogan diplomatically that ties between the two countries have traditionally been based on dialogue and cooperation.

Turkey’s charge d’affaires in Tehran was also summoned to the Foreign Ministry on March 29 and asked to explain Erdogan’s remarks.

Meanwhile, Ahmad Tavakoli, a conservative member of Iran's parliament, was among deputies calling for Erdogan’s upcoming visit to Tehran to be canceled due to his “lack of respect for a neighboring country.”

Iran’s Deputy Foreign Minister Hassan Qashqawi and Erdogan’s spokesman Ibrahim Kalin indicated, however, that the visit would go ahead. But Erdogan did not waste the opportunity provided by the speculation over his visit to display his assertiveness.

“We will be the one to decide if we go [to Iran] or not. At the moment we are sticking to our program. But we are also following developments in Yemen, which is very important for us. There could be developments that require us to make all sorts of decisions,” Erdogan told reporters before flying to Slovenia for an official visit March 30.

A diplomat in Ankara who wished to remain unnamed due to his sensitive position told Al-Monitor that Arab diplomats are taking Erdogan’s remarks concerning Iran with a pinch of salt, saying, “Many think he is only trying to ingratiate himself with the region’s Sunni regimes that he has alienated due to his support for the Muslim Brotherhood and other radical groups. Few believe he will actually act against Iran.”

Asked to name the “foreign powers” behind conflicts in different Arab nations, Elaraby included Turkey, saying, "There is meddling by some neighbors, Israel on one side, Turkey and Iranian interference in
several countries."

It seems Erdogan has yet to convince Arab League members that Turkey can play a role in not just rolling back Iran's regional ambitions, but als keeping groups like the Muslim Brotherhood and Hamas at bay. It is also not clear whether Erdogan is actually prepared to act against these groups, given his ideologically motivated support for them to date that is likely to continue in the future.