Ankara is showing signs of moving away from sectarian leanings and perhaps back to its historic neutral stance in the region. 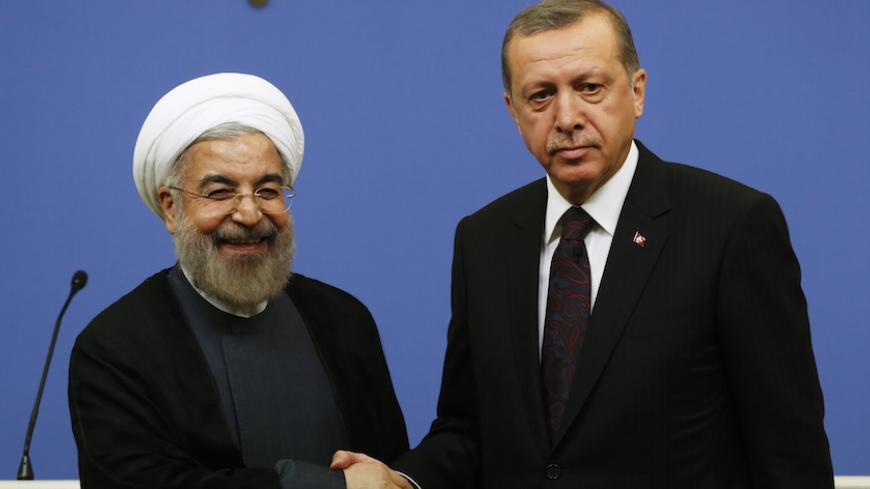 Following President Recep Tayyip Erdogan’s recent visit to Iran, speculation is rife about a new regional policy Ankara is trying to develop for the Middle East. This is said to be predicated on a return to Turkey’s former role as a potential mediator in regional crises, which it held prior to the Arab Spring.

There are those who argue that Ankara wants to shed the appearance of being a member of a regional Sunni alliance, and to be a facilitator instead for peace between Sunnis and Shiites in a turbulent part of the world marked by an increase in sectarian conflicts. It is noteworthy that Erdogan has been trying recently to actively distance himself from any suggestion that he harbors Sunni sympathies against Shiites.

This approach contrasts with his affront against Iran not so long ago, when he accused Tehran of vying for regional dominance, and pledged diplomatic and logistical support to the Saudi-led operations against Houthi rebels in Yemen that are backed by Iran.

Erdogan moderated this angry tone during his one-day visit to Tehran on April 7, which resulted in an agreement to cooperate with Iran for a mediated solution to the Yemen crisis. The sides also agreed to set up a diplomatic mechanism between them to follow up on this agreement.

Many in fact expected tension during Erdogan’s visit because of his accusations against Iran prior to the visit. Erdogan’s change of tone in Tehran took Turkish journalists accompanying him also by surprise. Verda Ozer, of the daily Hurriyet and an occasional contributor to Al-Monitor, was one of these journalists.

“Even more surprising were the messages he delivered on his return,” Ozer wrote, referring to Erdogan’s remarks to journalists as he was flying back to Ankara. “On the plane, Erdogan repeated five times, through the use of very firm expressions, that Ankara stands at equal distance to all sects,” she said.

“The balance of power in the region is being reshaped and apparently Turkey wants to have a say in this new equation,” Ozer added, going on to indicate that this new role is based on trying to regain Turkey’s former status as a mediator in regional disputes.

Erdogan stressed his nonsectarian position again April 12 during a conference in Istanbul organized to discuss “The Prophet and the ethics of living together.”

“Sectarianism is tearing the Islamic world apart today. ... We see this in Iraq, Syria and Yemen, where Muslims are mercilessly killing Muslims,” Erdogan said.

The argument that Ankara is seeking a nonsectarian role as mediator in the region is also shared by Abdullah Yegin from the Foundation for Political, Economic and Social Research, which is close to the ruling Justice and Development Party (AKP).

“The emphasis President Erdogan placed on the need for [Turkey and Iran] to mediate to end the bloodshed in the region provides us with an important clue to the coming period,” Yegin argued in his assessment of Erdogan’s visit to Iran, going on to underline the importance of the decision by the two countries to mediate in Yemen.

“If this is successful, the positive energy and experience to be gained from it as well as the model to be established can yield results in other regional problems such as Iraq and Syria,” Yegin said.

Foreign Ministry spokesman Tanju Bilgic told reporters in Ankara on April 9 that Foreign Minister Mevlut Cavusoglu and his Iranian counterpart, Mohammad Javad Zarif, could meet soon to discuss Yemen. According to information leaked to the daily Aksam, which is widely considered to be a government mouthpiece, Ankara is proposing a “five-point plan” to end the Yemen crisis.

"The five-point plan includes convincing the sides to declare a cease-fire, ending the airstrikes, providing humanitarian support, getting the sides around a table and, if necessary, convening an international conference,” Aksam wrote.

Some question the viability of this plan given that the Saudi-led airstrikes seek to reinstall the previous administration in Yemen, and to distance the Houthis — considered by Saudi Arabia as terrorists — and exclude them from any power-sharing arrangement.

Opinion is also mixed on what is driving Turkey in its push for a new regional policy and also as to whether Ankara is acting out of a position of strength or weakness. Some argue that Ankara is seeking to break out of its regional isolation following the Arab Spring, after having misread developments in Syria and Egypt in particular, and trying to make a comeback as a regional player.

Others point to Erdogan’s recent wavering between Iran and Saudi Arabia, with strong criticism of the one, and pledges of support for the other, and the fact that he was not in a position to follow up on these positions given Turkey’s delicate place in the region. As things turned out, Erdogan changed tack on Iran, and there is no more talk of logistical support for the Saudi-led operation in Yemen.

There also was confusion in Erdogan’s initial strong support for the Saudi-led operation against Yemen given that this puts Turkey in alliance with Egypt, which is led by Erdogan’s nemesis Abdel Fattah al-Sisi. It also puts Turkey in an alliance that is determined to repress the Muslim Brotherhood. Erdogan remains a strong backer of the Brotherhood.

Given the complexity of the Middle East, which has landed Turkey in a number of tight spots from Syria to Egypt, and now Yemen, Ankara appears to have little choice left but to try and move toward a middle ground and strive for a regional role from there.

It is not important if it succeeds. What is important is that it helps Turkey overcome the difficult and contradictory positions its policies have created as a result of the region’s complex crises, which have defied all of Ankara’s grand expectations for the Middle East.

The AKP government has learned the hard way that its over-ambitious policies did not tally with the region’s bitter, age-old realities, which appear unlikely to change anytime soon. Ankara found instead that it is being sucked into crises with potentially dangerous results for Turkey.

Speaking to Al-Monitor, former Foreign Minister Hikmet Cetin, who has also served as the NATO secretary-general’s highest representative in Afghanistan, underlined the fact that there was a reason Turkey’s traditional Middle East policy was always based on not getting actively involved in regional disputes, but trying instead to facilitate peace if possible.

Erdogan and supporters of the AKP until fairly recently considered this traditional policy to be spineless and demeaning for a regional power such as Turkey, which they believed had to play a primary role in reorganizing the Middle East. That dream seems to be over now.

Western diplomats in Ankara, talking to Al-Monitor on condition of anonymity due to the sensitivity of the issue, also welcome any move by Ankara toward the middle ground, saying this would enable Turkey to play a much greater and more positive role in the region than it does today.

They argue, however, that this will be contingent on Erdogan’s shedding of his Sunni-based ideological orientation in earnest, and moving toward a genuinely nonsectarian line.

Given Erdogan’s track record as an impetuous leader, it remains an open question as to whether he can do this.

What remains certain, however, is that circumstances are making him take a harder look at the realities of the region and forcing him to act accordingly.