Khamenei: Nuclear deal could allow talks 'on other issues' 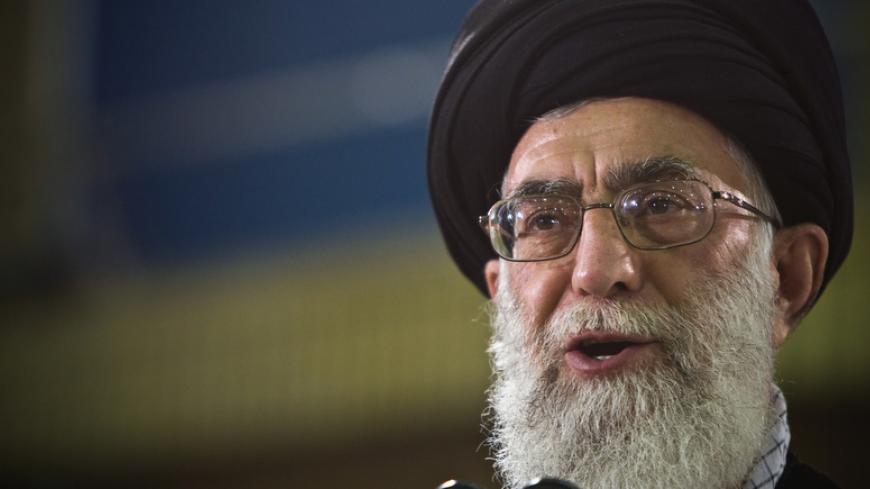 Iran’s Supreme Leader Ayatollah Ali Khamenei said April 9, “If the other side avoids its amphibology [ambiguity] in the [nuclear] talks, it'll be an experience showing it's possible to negotiate with them on other issues.”

Ali Hashem reports, “This last phrase is significant coming from Khamenei himself, and it might be the main message to come out of the nuclear framework.”

This column has consistently argued that the nuclear talks could present an opening for engagement with Iran on other regional questions.

Most of the media coverage of Khamenei’s speech focused on his saying that sanctions should be lifted “on the day of the deal” and that Iran’s military facilities were off-limits to inspectors. Khamenei was overall noncommittal on the fate of the nuclear talks, but praised his negotiating team, as did Ali Jafari, the head of Iran’s Islamic Revolutionary Guards Corp (IRGC), in an April 7 speech, as reported by Arash Karami.

Khamenei’s tough words should probably come as no surprise, with at least two months of difficult negotiations ahead, given that the framework agreement is only a "framework," and in the context of threats by some US Republican lawmakers to try to derail a deal.

Laura Rozen, who covered the talks from Lausanne, reports that Iranian Foreign Minister Mohammad Javad Zarif had warned the US team that the US "fact sheet" could complicate how the deal was received in Iran: “One of the most wrenching issues for Zarif the final night of talks with Kerry was apparently the detailed fact sheet on the framework deal that the United States insisted it needed to release to be able to make the case in Washington for the emerging deal and try to prevent congressional hawks from killing it. Zarif, who on top of no sleep was also suffering from a bad cold during the Lausanne talks, has bitterly complained the US fact sheet is deeply unhelpful to his task of selling the framework deal at home.”

Bruce Riedel writes, “With its hated enemies Saudi Arabia and the Zaydi Houthi rebels engaged in what may well be a protracted war, AQAP [al-Qaeda in the Arabian Peninsula] is flourishing in eastern Yemen and under less pressure than at any time since its founding in 2009.”

Farea al-Muslimi reports from Yemen, “The Yemeni street is practically split between supporters and opponents of the airstrikes. While the majority of Yemenis would agree that the Houthis’ actions and behavior have been problematic for Yemen, they are split on whether foreign intervention is the best way to address the issue.”

One way to quickly rally the country against the Saudi-backed air campaign in support of President Abed Rabbo Mansour Hadi, who commands limited loyalty among Yemen’s tribes and dim popularity among the country’s general population, would be to introduce foreign, especially Egyptian, ground troops.

Speaking to Enas Hamed, Egypt’s ambassador to Yemen, Youssef al-Sharqawy, said April 6 that his country would not rule out the use of Egyptian forces on Yemeni soil: “I’m not the one who will decide about a ground intervention in Yemen. This goes back to the estimate of the supreme authority in the country and Egyptian national security considerations. Anything national security requires, Egypt will do.”

Meanwhile, AQAP has already exploited the chaos to storm a prison in southern Yemen and free a number of al-Qaeda operatives.

AQAP’s free hand in Yemen also has the potential to destabilize neighboring countries, including Oman, where concerns about the health of Sultan Qaboos bin Said have led to speculation about the prospects for succession, as Al-Monitor reported in October 2014. Riedel writes, “Another target for al-Qaeda may be Oman, which has a long border with eastern Yemen. The Omanis face the prospect of a chaotic, lawless terror emirate on their Dhofari border for the foreseeable future.”

Given that the Saudi military intervention appears to be succeeding in accelerating Yemen’s collapse, another option might be diplomacy. On April 7, Iranian President Hassan Rouhani offered a four-part peace plan at a joint press conference in Tehran with Turkish President Recep Tayyip Erdogan, and then dispatched Iranian diplomats across the Middle East to begin consultations on Yemen, as Karami reports. The depth of Saudi-Iranian animosity may complicate the prospects of talks, at least for now. Two days after Rouhani’s remarks, Khamenei slammed Saudi Arabia for its airstrikes in Yemen, saying, “Despite disputes, Saudis used to display composure with us, but now inexperienced youngsters have come to power and replaced composure with barbarism. I warn that they should refrain from any criminal move in Yemen. The US will also fail and face loss in this issue.”

“Erdogan’s tone was conciliatory,” Idiz writes. “He said the two sides had explored what could be done jointly to overcome regional tensions and combat terrorism. He also thanked Rouhani for his warm hospitality. This tone of Erdogan’s contrasted sharply with his previous Iran bashing and confused observers and diplomats alike, forcing them to see this as a further sign of confusion in Turkey’s current foreign policy.”

The visit came after Erdogan told France 24 TV on March 27 that Turkey supported “Saudi Arabia’s intervention” in Yemen and his demand that “Iran and the terrorist groups must withdraw.”

Cengiz Candar reports that Erdogan’s restraint may have reflected a reluctant realism that successful nuclear negotiations with Iran could be a turning point in Ankara-Tehran ties, for better or worse:

“The nuclear framework deal reached might be a game changer in Turkey’s — meaning Erdogan’s — attitude toward Iran. It sent signals to Turks that Iran will escape its international isolation, with regained weight in regional and international affairs. Turkey, which already has problems with its Western allies on Middle East issues, particularly Syria, cannot afford to be at loggerheads with Iran.”

Turkey, writes Candar, is also the best-positioned Sunni power to take advantage of a newly open Iran, especially given Ankara’s membership in NATO: “It must be noted that Turkey was not concerned about Iran’s nuclear capacity like the Gulf actors, above all Saudi Arabia. Its status as a NATO member provided a certain security assurance that neither Israel nor some Arab countries have concerning Iran. They are also Sunnis, but Turkey’s geopolitics are different than those of the Gulf. Turkey has a history and geography that equips it with a certain self-confidence that others in the region lack when it comes to dealing with Iran.”

Julian Pecquet reports this week that former Secretary of State Hillary Clinton, who is expected to announce her candidacy for the Democratic nomination for president April 12, is facing questions on “foreign contributions to the Clinton Foundation, most recently a $1 million donation from OCP, a fertilizer giant owned by the Moroccan government. Left unsaid in the initial reports: OCP — the Office Chérifien des Phosphates — is a major player in the exploitation of mineral resources from the Western Sahara, a disputed territory known as the 'last colony in Africa' that Morocco took over after colonial power Spain abandoned it in the 1970s.

“'You’ve heard of blood diamonds, but in many ways you could say that OCP is shipping blood phosphate,' Rep. Joe Pitts, R-Pa., told Al-Monitor. 'Western Sahara was taken over by Morocco to exploit its resources and this is one of the principal companies involved in that effort.'”

Al-Monitor updated its series on lobbying by Middle Eastern governments this week with new information on Saudi Arabia’s digital consulting moves and a host of other updates.