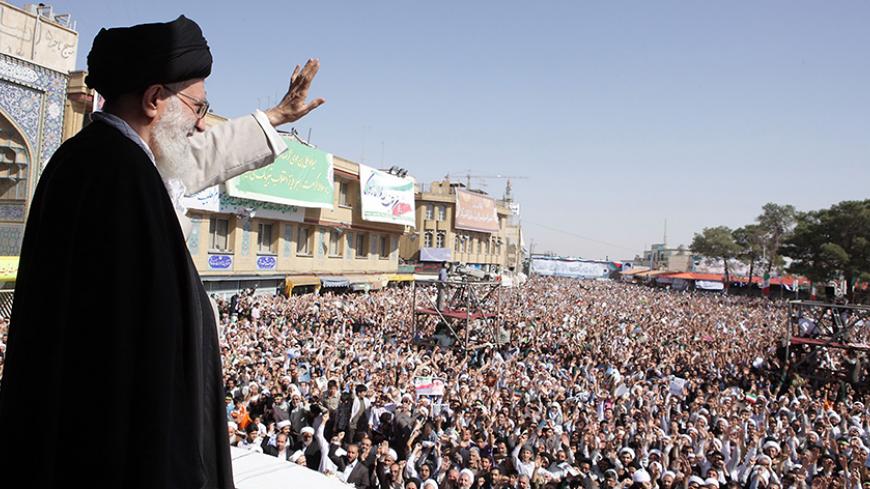 Though it was a meeting with orators, Iran’s Supreme Leader Ayatollah Ali Khamenei seized the moment to launch a verbal war on his country’s main regional foe, Saudi Arabia, and to stress his previously drawn red lines regarding the nuclear talks. Khamenei made it clear that Iran and Saudi Arabia are fighting a war despite the fact there has been no Iranian bullet shot as of yet.

“On the outcome of recent talks, I’m neither for nor against it,” Khamenei said, explaining that there were no substantial measures taken and nothing binding. “All sanctions should be removed just when the deal is reached — if sanctions removal depends on another process, then why did we start to talk?”

Khamenei aimed at answering questions that started circulating in Iran over the different versions of the framework — the fact sheet the White House issued, and the one announced by the Iranian negotiating team. He wanted to cut the debate short by announcing that there will be no deal, and there’s no need to waste time if at the end of the coming three months a decision to lift the sanctions isn't taken. Yet Iran’s supreme leader highlighted his famous fatwa that forbids building nuclear weapons touching on what the US president said in his first speech after the Lausanne talks: “Islam and reason forbids us from acquiring nukes, but nuclear industry is a necessity for our country’s future in energy, medicine, agriculture, etc.” He wanted to say clearly that if the world wants a guarantee, then he’s the real guarantee.

Another main point Khamenei aimed to underline was the inspection of military posts and defense industry: “We've [notified] officials that they shouldn't let [UN inspectors] enter the security and military areas under the controlling excuse.” This was a clear message to the six world powers that Iran’s missile program isn’t on the list, and that if they thought this might be part of the deal to lift sanctions, then Iran is ready to live with sanctions and not to accept such a clause or any other condition. From his point of view, this would harm the “dignity of the Iranian nation.”

Yet despite his clear denial that any other regional, international, or domestic issues were discussed in the talks, Khamenei surprisingly stated, “If the other side avoids its amphibology [ambiguity] in the talks, it'll be an experience showing it's possible to negotiate with them on other issues.” This last phrase is significant coming from Khamenei himself, and it might be the main message to come out of the nuclear framework.

On Yemen, and the Saudi coalition war there, Khamenei’s position revived the Iranian rhetoric during the eight-year war with Iraq. Khamenei compared Saudi Arabia’s bombing of Yemen to Israel’s bombing of Gaza, warning the Saudis that their “nose will be rubbed in Yemen’s mud.”

The Iranian leader criticized the new rulers of Saudi Arabia, describing them as inexperienced youngsters: “Despite disputes, Saudis used to display composure with us, but now inexperienced youngsters have come to power and replaced composure with barbarism.” He added, “I warn that they should refrain from any criminal move in Yemen. The US will also fail and face loss in this issue.”

Khamenei’s stances reflected the amount of tension that has evolved between the two regional powers that are already fighting a proxy war in Syria, and now a semi-proxy war in Yemen, hinting for the first time that both countries are moving away from diplomacy and closer to a situation where a collision might become an option for both.

This situation might lay its shadows not only on Yemen and Syria, but also on other countries where both countries have weight: Lebanon for example, the country where Iranian-backed Hezbollah and the Saudi-backed Future Movement started their own war of words few days earlier.