The latest Israel-Hezbollah confrontation might be a catalyst for a nuclear deal between the P5+1 and Iran; Iran can ease Saudi Arabia’s security predicament; Netanyahu sees electoral gain in snubbing Obama. 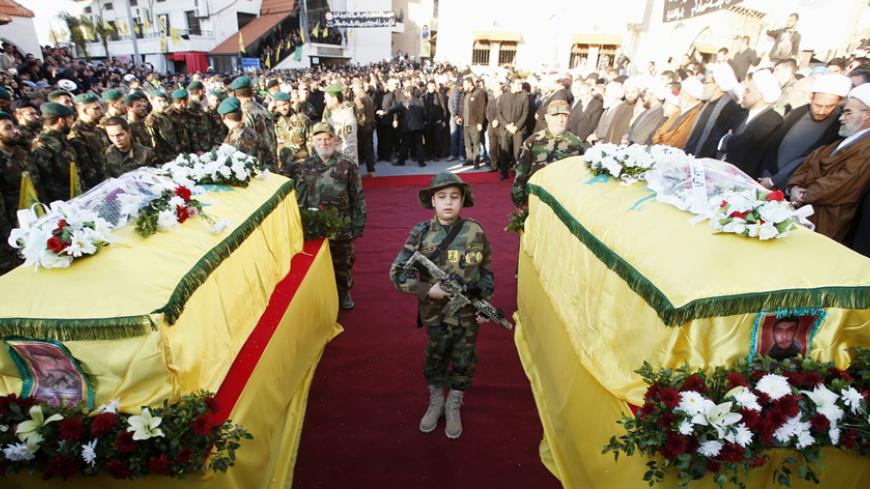 The son of Lebanon's Hezbollah soldier Abbas Hijazi, who died in an airstrike in Quneitra, carries a toy weapon as he stands between his father's (R) and grandfather's (L) coffins in Ghaziyeh village, south Lebanon, Jan. 21, 2015. - REUTERS/Ali Hashisho

An Israeli airstrike on Quneitra, in the Syrian Golan Heights, on Jan. 18, which killed six members of Hezbollah and a general in Iran’s Islamic Revolutionary Guard Corps (IRGC), could be a catalyst for the nuclear talks between the P5+1 powers and Iran and a wider discussion to address a deteriorating regional security environment, including the fall of Yemen.

The Iranian Foreign Ministry condemned the Israeli strike, saying the incident “indicates that the Syria war is a part of confrontation with the Zionist regime.”

Ali Hashem reports from Beirut that Hezbollah may be weighing three options in retaliation: an imminent response with force; no response; or that a response is coming, but on its own schedule and terms.

Expect Hezbollah Secretary-General Hassan Nasrallah, when he responds to the attack, to go with option three: to declare that a response is coming, but at a time and place of his choosing. That is probably what he will say; the question is what he will do.

Nasrallah understands the stakes, and risks, of another confrontation with Israel. In an otherwise blustery speech on Jan. 15, he described a "deterrent" relationship between Hezbollah and Israel that has mostly held since 2006:

“There is deterrence on both sides of the border. If the resistance decides to force a confrontation, it should be aware that Israel is a strong enemy and the Israelis also know the resistance is strong and capable,” he said.

Ben Caspit writes from Jerusalem that the Israeli attack is a sign of Israel’s deepening role in Syria because of the threat from Hezbollah:

“The Israeli new red line, by which Israel thwarts acts of terror and prevents “​game-changing weapons” from moving from Syrian President Bashar al-Assad’s hands to Hezbollah, is dragging the country into the Syrian civil war. But in the Middle East, everything has its price and Israel is supposed to take into consideration the cumulative, potential price of the escalation.”

Israeli sources told Caspit that Israel expects Hezbollah retaliation, if and when it comes, to probably occur in the Golan Heights, and that Israel’s reaction might include a declaration of war on Lebanon, not just Hezbollah.

These are storm clouds, for sure, but there may also be opportunity in crisis. Caspit writes that Israel’s claim that the IRGC general was not the intended target of the attack might be “an attempt to lower the flames, and to try to pacify Tehran.”

One opportunity could be the nuclear talks. US and Iranian officials both claim that the P5+1 negotiations are limited to nuclear issues, although there have reportedly been brief "side" conversations about the Islamic State (IS), as well as regular US demands for the release of Americans detained in Iran, including Jason Rezaian of the Washington Post.

We could, and probably should, imagine a more expansive conversation, somewhere, between the United States and its allies and Iran to defuse the crisis on Israel’s borders. All parties should have an interest in averting a confrontation involving Israel, Lebanon and Syria, which would threaten the hard-fought progress to date in the nuclear talks and the increasing alignment of US, coalition and Iranian actions in battling IS and al-Qaeda affiliates in Syria and Iraq, as this column has reported.

For example, the United States and its allies should want Iran to use its influence to restrain Hezbollah, so that Nasrallah’s anticipated fiery response, to appease his hard-line supporters, will include a declaration of war or retaliation that will exist only in words, not deeds.

And Iranian negotiators might say that the absence of progress in the nuclear talks, along with an Israel-Hezbollah confrontation, will likely constrain those Iranian politicians and diplomats pushing a nuclear deal.

In other words, Iran’s team will say it needs progress on a nuclear deal to do the necessary to reign in Hezbollah; the P5+1 will say that the talks cannot afford a conflagration involving Hezbollah and Israel. Both sides should see a rationale for accelerating, and expanding, the nuclear dialogue.

A second opportunity may be the negotiations later this month in Moscow among Syrian opposition figures and government officials. US Secretary of State John Kerry said on Jan. 14 that he hoped the Russian-brokered talks could be “helpful.” The prospects for a political transition will not come easily, but should not be dismissed. As this column pointed out last week, Nasrallah himself may have blurred his own red line on Assad when he said, “Even if the political solution means that Assad should go after the end of his term, this should be in coordination with him … A committee needs to be formed to review the constitution and reforms, and a dialogue established. Some might suggest that early parliamentary elections be held — this is what’s being suggested — or that the president give part of his powers to the Cabinet, not all his powers.”

The passing of Saudi King Abdullah bin Abdulaziz coincides with an accelerating crisis in Saudi national security as a result of the fall of Yemen's government to Houthi rebel groups backed by Iran.

Bruce Riedel writes that the Yemen government’s fall is “a major setback for US and Saudi diplomacy, a limited victory for Iran and a plus for al-Qaeda.”

This is dead on, and may even be putting it mildly. It is hard to lowball the kingdom’s security predicament. On its borders, IS is the wolf at the door in Iraq, and al-Qaeda in the Arabian Peninsula (AQAP) has room to roam in Yemen. Both groups call for the overthrow of the Saudi rulers. And Iran holds dominant influence with the ruling parties in Iraq and now Yemen.

And then there is Saudi’s neighbor and ally Bahrain, where a restive, majority Shiite population — cheered on by Iran — continues to agitate for greater political freedoms.

But as with the Levant, here, too, there may be opportunity in crisis.

While Iran and Saudi Arabia have their differences, Iran is not calling for the overthrow of the Saudi monarchy.

Events should spark a Saudi rethink of its approach to Iran, and Iran should rethink its antagonism of the kingdom. Saudi Arabia is a member of the international coalition against IS and al-Qaeda; Iran shares this interest. Iran can make life easier or more difficult for Saudi Arabia. Saudi Arabia, like the P5+1, should put Iran to the test about its professed willingness to bury the hatchet. A summit between King Salman and Iranian President Hassan Rouhani could change the regional dynamic for the better. Otherwise, the Saudi predicament can go from bad to worse, and that includes worse for Iran and the rest of the Gulf region.

The United States has already signaled that a shared interest in battling al-Qaeda may allow some low-level intelligence cooperation between the United States and the Houthis.

Barbara Slavin reports that Undersecretary of Defense for Intelligence Michael Vickers indicated that the United States may have some lines of communication with Houthi rebels now in control of much of the country about a shared interest in combating al-Qaeda: “The Houthis are anti al-Qaeda, and we’ve been able to continue some of our counterterrorism operations against al-Qaeda in the past months.”

Slavin wrote, “Asked whether US counterterrorism operations include intelligence lines ​to the Houthis, Vickers said, 'That’s a safe assumption.'”

Israeli Prime Minister Benjamin Netanyahu expects that his speech to a joint session of Congress on March 3 will be a boost to his re-election campaign, despite the likely fallout as a result of his snub of the White House in accepting the invitation from US Speaker of the House John Boehner.

Ben Caspit writes that the situation is “unlike anything that ever happened before in the bilateral relationship between the White House and the prime minister’s office in Jerusalem … If Netanyahu does manage to subvert the negotiations between Iran and the world powers by going over the president’s head to get American sanctions renewed, he will be accused of being responsible for the greatest diplomatic failure of Obama and the West. Israel will likely pay the price.”

The White House has said that US President Barack Obama will not meet with Netanyahu during the visit, which will take place just two weeks before Israel’s general elections. It is long-standing White House policy not to meet with foreign leaders so close to their elections to avoid the appearance of US interference in other countries’ domestic politics. This official line, however, cannot mask the frosty relationship between Obama and Netanyahu, which has reportedly worsened as a result of the invitation.

And, as Mazal Mualem reports, Obama’s decision not to meet with Netanyahu is also being seen as a sign of interference in Israeli politics, especially on the Israeli right.

Netanyahu’s going “behind Obama’s back when he arranged the speech in Congress for himself is, in their [the Israeli right’s] view, proof of his decisiveness in the face of an American pro-Palestinian administration, which has been trying to trip him up from the start,” she writes. “This public also sees the boycott of Netanyahu’s visit by Obama and Secretary of State John Kerry as an attempt to interfere in the Israeli elections for the benefit of the left wing.”

Caspit adds, “Obama could also blame himself. He is responsible for turning himself into one of the most despised US presidents among the Israeli public, and in so doing he lost the leverage that every other president had on Israel’s leaders: the knowledge that the Israeli public would never forgive any harm caused to the Jewish state’s most valuable strategic asset, America.”

Akiva Eldar, in an especially searching article, places the Israeli attack on Hezbollah in Quneitra within the wider lens of diaspora politics and Israeli democracy: “A military operation to thwart terrorism against Israel’s citizens should not be discounted out of concern over terrorist revenge on a Jewish activist in Buenos Aires or on worshipers at a New York synagogue. On the other hand, there is certainly room for the representatives of the Israeli public to conduct themselves in the spirit of the Declaration of Independence, defending democratic values and acting to narrow the gaps in Israeli society. To be a full member of the family of enlightened nations and a safer place for Jews, Israel must shake off the yoke of the occupation and courageously put out its hand in peace to the Arab neighbors.”