Nasrallah steps back from confrontation with Israel after attack; Iran sanctions in perspective; Netanyahu plan may backfire; Kurdish victory in Kobani a setback for Turkey; Are Iraqi Kurdish land grabs sowing future conflict? 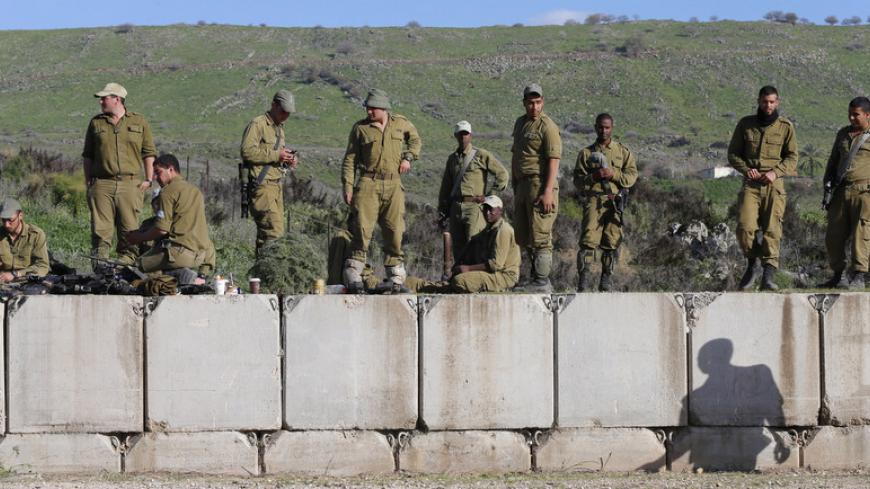 Nasrallah: "We don’t want a war"

Hezbollah Secretary-General Hassan Nasrallah said Jan. 30, "We don’t want a war … but we are not afraid of war," adding, "The resistance no longer cares about rules of engagement, and we do not recognize them in confronting the enemy. We have the right to confront the enemy at any time, place or manner."

Ali Hashem reports from Lebanon: “It was clear that the Shiite group had decided to throw the ball back into the Israeli court. From the Islamists' perspective, the attack was needed to restore the deterrence power Hezbollah has maintained since its war with Israel in 2006.”

Ben Caspit writes from Jerusalem that Israel considers the confrontation with Hezbollah as “a short-term victory. This round in the regional war between Israel and Iran and Iran's proxies (Hezbollah and Syria, in that order) ended in a tactical draw, but with a prominent strategic victory for Israel,” because the Israeli strike “wiped out all the elites of a terrorist branch that was being formed on the Golan Heights border fence.”

While influencing Hezbollah to back down after retaliating, Iran has again displayed its reach and capabilities on Israel’s northern and southern borders.

In addition to Hezbollah, Iran and Hamas continue to show signs of a thaw in ties that have been strained since Hamas turned against Syrian President Bashar al-Assad.

Adnan Abu Amer reports from Gaza: “Deputy Chief of Hamas’ political bureau, Ismail Haniyeh, announced on Jan. 20 his unity with Hezbollah after the Israeli assassination, and he considered the incident a message reaffirming the need to reunite against Israel and to work on the same page.”

As this column wrote last week, the logic of restraint could be a spark to the nuclear negotiations with Iran and eventually allow “a more expansive conversation, somewhere, between the United States and its allies and Iran to defuse the crisis on Israel’s borders. All parties should have an interest in averting a confrontation involving Israel, Lebanon and Syria.”

The rush on Iran sanctions

Although the Senate Banking, Housing and Urban Affairs Committee voted 18-4 on Jan. 29 in support of legislation that would impose more sanctions on Iran if a nuclear agreement is not reached by June 30, Julian Pecquet reports from Washington that the Barack Obama administration scored a victory when 10 Democratic senators said they would not vote for sanctions legislation before March 24, the deadline for a political framework agreement.

The “deep skepticism” about Iran’s intentions conveyed in the letter have merit and are healthy for any negotiation, including and especially with Iran. No doubt the pressure from sanctions, and the threat of more sanctions, has been an incentive for Iran to negotiate a deal. There may be a ways to go. In a November 2014 report, the International Atomic Energy Agency (IAEA) noted that “Iran has not provided any explanations that enable the Agency to clarify the outstanding practical measures, nor has it proposed any new practical measures in the next step of the Framework for Cooperation.”

One might also apply a Ronald Reagan standard to the P5+1 talks with Iran. Taking a cue from his remark during an Oct. 2, 1980, debate with President Jimmy Carter, when candidate Reagan asked Americans, “Are you better off than you were four years ago?” We might ask are we better off because of the negotiations with Iran since the signing of the Joint Plan of Action (JPA) in November 2013, just 14 months ago.

According to a December 2014 report from the IAEA, “The monitoring and verification in relation to the nuclear-related measures set out in the JPA involves: a significant increase in the frequency of the Agency’s in-field verification activities, including access to locations other than those at which the Agency had previously conducted such activities; procurement and installation of more safeguards equipment; more sample analysis; and more analytical work.”

An IAEA report to its board of governors in November 2014 noted, “Since the JPA took effect, Iran has not enriched UF6 above 5% U-235 at any of its declared facilities and all of its stock of UF6 enriched up to 20% U-235 has been further processed through downblending or conversion into uranium oxide.”

The progress to date, while not perfect, could probably itself be considered remarkable, considering the brief interval since the signing of the JPA and the depth of animosity and distrust over three decades between the United States and Iran, and when compared to what one might consider to be the "normal" length of time it takes to negotiate complex agreements between the United States and friendly countries.

For example, it took six years (2006-12) to negotiate and enact the US-Colombia Trade Promotion Agreement; five years (2007-12) to close the deal on a renegotiated US-Korea Free Trade Agreement; and three years (2005-08) to conclude the US-India Civil Nuclear Agreement.

A careful weighing of the benefits and risks of potential actions that could scuttle negotiations, contrary to the recommendations of the Obama administration, should be considered in light of how far the Iran nuclear negotiations have come in such a short time.

Akiva Eldar writes that Israeli Prime Minister Benjamin Netanyahu, for one, is missing the point on Iran. Netanyahu’s attempts to derail a possible deal, including his planned speech before the US Congress on March 3, could backfire on US-Israel ties, and create a further incentive for Iran to close the deal:

“The obvious wedge between Netanyahu and President Barack Obama exposes Israel, not Iran, as the recalcitrant outsider. When Netanyahu arranged to appear before both houses of Congress on March 3, proclaiming his speech as designed to derail Obama’s efforts to achieve an agreement on Iran’s nuclear program, the prime minister actually gave Iran additional incentive to sign an accord. Iran can now be assured that signing an agreement will deepen the rift between the White House and the official residence on Jerusalem’s Balfour Street as long as no new tenant occupies the house.”

Amberin Zaman writes from Turkey that for Ankara, the prospect of independent Kurdish territories on its border is keeping it from revising its failed Syrian policy:

“The PKK [Kurdistan Workers Party] and the PYD [Democratic Union Party] both claim that Turkey has been arming and training jihadists in a proxy war aimed at undermining the Syrian Kurds’ experiment with self-rule, and that its policy is having a boomerang effect. The Jan. 6 suicide bomb attack carried out by a female IS [Islamic State] militant that claimed the life of a Turkish police officer in Istanbul’s Sultanahmet district was a sobering reminder that Turkey is not immune from the jihadists, either.”

Turkey is not only risking more strikes by foreign terrorists, but also domestic pressures from a restive Kurdish population watching the shaky peace process with unease.

Zaman reports: “Erdogan’s remarks suggest that Turkey will keep political and economic pressure on the Syrian Kurds and continue to badger them to join the Istanbul-based Syrian opposition and to declare war against the regime. This, in turn, risks further undermining support for the peace process among Turkey’s Kurds, potentially triggering a fresh cycle of violence and instability.”

Denise Natali writes from Washington that the Kurdistan Regional Government seizure of disputed territories in Iraq in the course of the battle against IS may fuel antagonism with Iraq’s Sunni communities:

“Relying on Iraqi Kurds to act as coalition boots on the ground may help eliminate some IS safe havens, but it is fueling Kurdish land grabs. Iraqi Kurds are using US airstrikes and the political vacuum in northern Iraq not only to push back IS, but also to recapture the disputed territories and oil fields — some of the very measures that have fueled Sunni Arab resentment since 2003. These trends are undermining the effort to assuage Sunni Arab grievances and laying the groundwork for Iraq’s next protracted, subnational conflict.”