Only a small number of Salafists from Gaza have traveled to Syria and died fighting for the Islamic State. 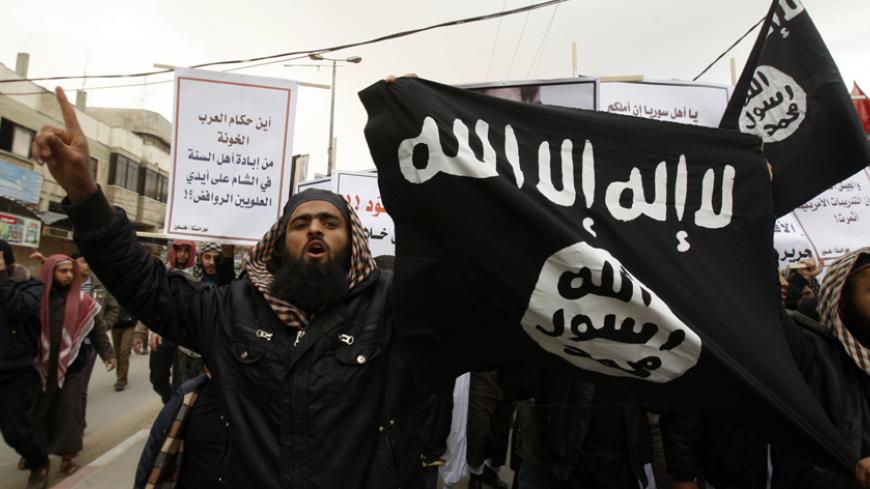 GAZA CITY, Gaza Strip — Ahmed, a 19-year-old affiliated with one of the Salafist jihadist factions in Gaza, thought he had found the perfect environment in Syria for implementing his jihadist ideas, fighting among the ranks of the Islamic State (IS). His father told Al-Monitor that Ahmed (a pseudonym) had been living in a refugee camp in the central Gaza Strip before joining IS at the beginning of 2014. Ahmed was killed at the end of the year.

Ahmed's father, who asked to remain anonymous for safety reasons, said his son had died during clashes between IS and Kurdish forces, adding that Ahmed had initially kept him in the dark about his trip to Syria. “I didn't know he had gone to fight in Syria. Had I known, I would have stopped him,” he said. He later learned that his son had left Gaza via the tunnels on the Egyptian border.

He stressed that his son had not shown any signs of extremism, despite his affiliation with one of Gaza's Salafist jihadist organizations, on which security services try to keep a tight lid. Ahmed's father said, “My son left the Strip to join the jihad in Syria because he was harassed by the security services in Gaza and was repeatedly arrested for being affiliated with small Salafist groups.”

According to the Salafist factions’ media outlets and statements, several Gazan youth who traveled to Syria to fight with IS have been killed in recent months, indicating a possible presence by IS for recruiting in Gaza, although quite limited.

In Gaza, Al-Monitor managed to contact Abu Noor al-Maqdisi, a senior Salafist leader and IS supporter, who stated, “The armed Salafist factions in Gaza are no longer restricted within the scope of individual currents, but have formed a united bloc.” He added, “All the Salafist currents are following the Islamic State ideology, but have not yet pledged allegiance to it. Some fighters formerly affiliated with Ansar Bayt al-Maqdis and who joined IS have pledged allegiance to Caliph Abu Bakr al-Baghdadi and are fighting with IS. They have strictly adopted IS' ideology, and some of them were even killed [in Syria].”

Maqdisi emphasized that all the Gaza currents are committed to supporting IS and will join its ranks in the future. For now, however, Maqdisi said, only those fighters who have left Gaza to fight for IS against those he called “enemies of God” have pledged allegiance to IS.

By Maqdisi's estimate, about 50 Gazans have thus far left to join IS. “There are at least 15 who were killed in various operations, some during the clashes against the Syrian regime in different areas, two who blew themselves up near the Iraqi army and its allies, and dozens are still fighting in Syria,” he said.

The Salafist leader said the routes taken by the fighters are well known, referring to the tunnels. Various supporters provide safe passage for those leaving Gaza for Syria and the territories where IS has a presence. Maqdisi refused to comment on men who had fought with IS and then returned to Gaza alive.

Despite the Gazans who have headed to Syria during the past two years, the Interior Ministry in Gaza denies an IS presence there.

Interior Ministry spokesman Iyad al-Bozm told Al-Monitor, “The only way out of the Gaza Strip is through the Rafah crossing, which is closed most of the year, or through the Erez crossing [Beit Hanoun], from which exit is impossible except in special cases, such as for foreign or humanitarian delegations.”

Bozm added, “Rumors circulating about this matter are exaggerated. Some young men left the Gaza Strip earlier, and some already lived abroad. Some of them were killed in the fighting in Syria, Iraq or other countries, but at the moment no one is leaving the Strip to participate in the fighting with Islamic organizations in other Arab countries.”

He referred to individual cases from Gaza, whose population is approaching 2 million, but said they should not be generalized. “It is possible that a young man was able to leave the Strip under a medical transfer or to perform umrah [pilgrimage]. However, the tunnels were almost completely destroyed by the Egyptian army two years ago.”

Regarding political parties or individuals in Gaza who have adopted jihadist ideas, Bozm said, “This may exist in Gaza, but there are no organizations associated with Islamic organizations such as IS and others.” He further claimed, “The Interior Ministry confirms that the Gaza Strip is free of any militant or extremist organizations, stressing that young people are not leaving the Gaza Strip to participate in the fighting along with organizations in Syria and Iraq. Young Gazans killed in clashes in Syria or Iraq probably left Gaza years ago.”

Only a small number of Gazans appear to have left to fight with IS, but communication between the Salafist jihadists in Syria and Gaza remains ongoing, albeit even if informal.