A Palestinian jihadist militant fighting for the Islamic State of Iraq and al-Sham (ISIS) was killed last week in Syria, reflecting the rise of Salafist militants in Gaza, but Hamas remains adamant that the radical group does not exist in the Gaza Strip. 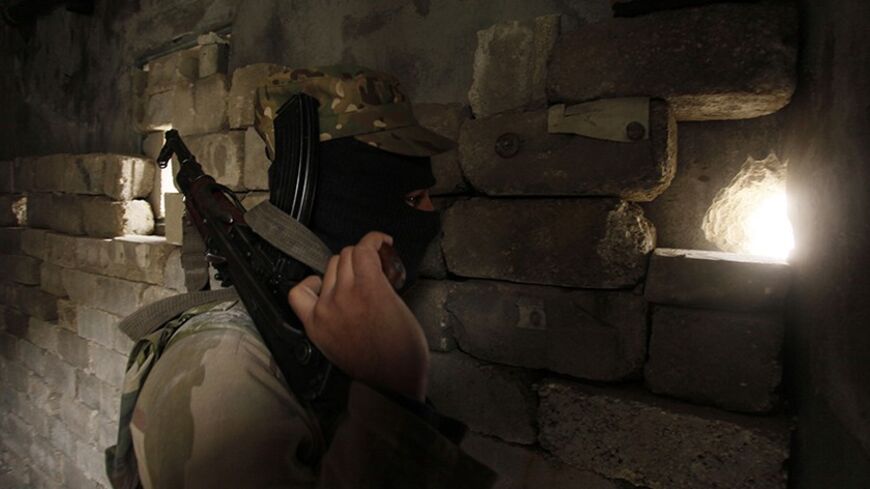 A member of the Islamic State of Iraq and al-Sham carries his weapon as he looks through a hole in a wall in Aleppo, Dec. 4, 2013. - REUTERS/Molhem Barakat

GAZA CITY, Gaza Strip — On May 25, it was announced that a 21-year-old Palestinian man from the Gaza Strip was killed during a battle in Syria while he was fighting in the ranks of the Islamic State of Iraq and al-Sham (ISIS). The story revived the debate about the presence of Salafist groups in Gaza, the breadth of their activities and the priorities to fight in the framework of their military ideology.

The ISIS-affiliated Jihad Media Forum posted a mourning statement about the young man, Wadih Nafedh Wash, from Jabaliya in the northern Gaza Strip. “From the blessed land of Sham, and in full delivery to God’s justice, the Sheikh Abu al-Noor al-Maqdisi Brigade informs you that [our] brother Wadih Nafedh Wash, an immigrant soldier in the Islamic State in Iraq and al-Sham, was martyred in the battle of dignity that is raging on the ground of Sham,” the statement read.

Al-Monitor spoke with Wadi’s father, Nafedh Wash, about how his son died. Nafedh said that his son was killed during a battle between ISIS and Syrian regime forces in Deir el-Zor, Syria.

“My son left Gaza to Egypt about nine months ago through an underground tunnel,” he said. “When he was in Egypt, he then informed me via a mobile phone message that he and his comrades were going to fight in Syria for ISIS, which he had joined three years ago.”

Nafedh said that he knew his son was affiliated with ISIS in Gaza because Wadih was personally and intellectually convinced of the need to perform jihad, but Nafedh said that he didn’t know that his son would go to Syria to fight there. Wadih left in secret without telling anyone.

Nafedh said that his son traveled to Syria because he was being pursued by security agents in the Gaza government for launching rockets at Israel. “Hamas’ Internal Security Agency arrested my son more than six times. The last time, he was severely tortured in prison and required physical treatment that lasted two months,” he said.

He noted that Wadih had tried to enter Egypt through an underground tunnel, but was arrested in the city of al-Arish. He was tried and imprisoned for two months in an Egyptian prison, forcing his father to pay $2,000 bail to release him.

Nafedh said that his son communicated with him via Skype and expressed his happiness living within ISIS ranks under Islamic law there.

“Wadih used to tell me some of the things they did in Syria. He once told me that he killed dozens of Iranian fighters who were fighting alongside the Syrian regime,” he said. Nafedh added that he always asked his son to return to Gaza, but his son insisted on staying for fear of being arrested again and put in Gaza’s prisons.

Communication with his son stopped completely about two months ago. At that time, an acquaintance in Aleppo told Nafedh that his son was killed by a Syrian regime sniper.

Gaza government spokesman Ihab al-Ghussein expressed his opposition to young Palestinians going to Syria to perform “jihad.” “It’s not logical that young men travel from the 'land of Rabat' [Palestine] to fight in other places. Our country needs the youth to resist Israeli occupation, and whoever wants to carry out jihad and resistance, then here lies the land of jihad and resistance.”

During his interview with Al-Monitor, Ghussein said that his government cannot prevent any Palestinian citizen from traveling or question him about his motives or why he’s leaving, but the government is trying to control these individuals' activities.

He denied that some of them were being tortured in Gaza jails. “Those youths are being dealt with by the Interior Ministry’s political and moral guidance body, which follows the method of persuasion by discussing their ideas with them,” he said.

Hamas leader Yehya Moussa said that some young men traveling from Gaza to Syria “is considered an individual and exceptional event that happens in secret.” He said, “It doesn’t mean that the Gaza Strip is involved in this war.”

Speaking to Al-Monitor, Moussa objected to these young men fighting outside the Gaza Strip instead of fighting inside it against Israel. “The battle of the Palestinian people is in Palestine against the Israeli enemy. Therefore, we consider it a mistake that a Palestinian youth is not seeing his near enemy and joins battles that have no meaning and don’t benefit the Arab nation. This cannot in any way achieve anything positive for the Palestinian cause.” He stressed that Hamas’ position is to not interfere in the affairs of Arab countries.

These two officials told Al-Monitor that Hamas — both the government and the party — categorically doesn't recognize the existence of militant Salafist organizations in the Gaza Strip, but considers these people to be a group of individuals that get their ideas from the Internet. They also denied that the reconciliation with Fatah contains provisions on how the next government will deal with Salafist organizations.

“In the Gaza Strip, we have no groups under this label or the like. We deal with all the factions of the Palestinian people. We always call on [the factions] to focus their efforts on pushing the occupation out of our land,” said Moussa.

There has been no discussion to develop policies to deal with these groups in the next phase within the framework of the Palestinian reconciliation, Moussa said. “We don’t recognize the existence of any of these groups, so how can we discuss how to deal with them? That is unreasonable.”

Ghussein concurred. “What’s present are some youths who got their ideas indirectly via the Internet,” he said. Regarding the talk about the presence of organized Salafist groups, he said, “This matter is absolutely nonexistent.”

“The Palestinian factions that resist the occupation are known to the public. They are military organizations that conduct the battle with national responsibility,” he said, noting that individuals who work under the name “Salafist groups” used to belong to the Palestinian factions and split from them, and took advantage of their weapons to work under different names.

The Gaza government spokesman said that in the past problems existed with these individuals, who were trying to form a faction, as evident in the deadly clashes in Rafah in 2009. However, he stressed that the government was able to dissolve these ideas and defeat them.

On Aug. 14, 2009, the city of Rafah in the southern Gaza Strip saw bloody clashes between Hamas and the Salafist group Jund Ansar Allah, when the latter declared an “Islamic emirate.” That led to the killing of the group’s leader, Abdel Latif Moussa, and six of his followers.

Since then, the relationship between the two has been tense.

Nafedh, by monitoring his son’s life during his stay in Gaza, said that Salafist jihadism has existed on the ground in the Gaza Strip and with a growing popular base. He stressed all claims that they don’t exist in the Gaza Strip “are untrue.”

He said that ISIS in the Gaza Strip is paying the costs of his son’s funeral, pointing out that ISIS has hung a large banner at the entrance to the funeral place, upon which was written “Salafist jihadism in Bayt al-Maqdes [Jerusalem].”

by Haitham EL-TABEI with AFP correspondents in the Middle East | AFP | May 17, 2022
END_OF_DOCUMENT_TOKEN_TO_BE_REPLACED