Iraq is witnessing the growth of a new generation of young filmmakers, but they face serious challenges from society over the content of the films. 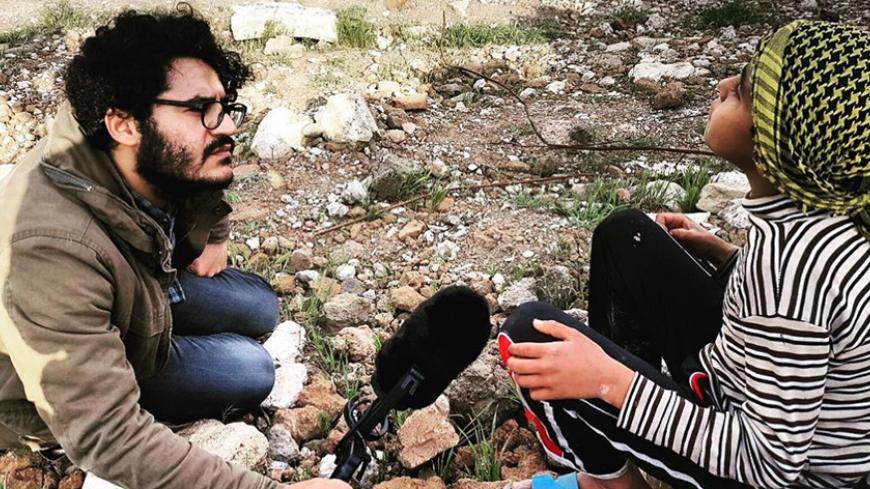 Iraqi film director Wareth Kwaish is seen on the job in a picture uploaded April 20, 2017. - Instagram/@wareth_kwaish

BAGHDAD, Iraq — Two young Iraqi filmmakers have been taking on forbidden subjects in their productions despite the risks involved from offending tribal customs and traditions as well as some religious groups. Zamen Ali, who graduated from Baghdad University's Faculty of Fine Arts this year, has produced a short movie featuring a lesbian relationship, while the director, Wareth Kwaish, has finished shooting “Disco Baghdad,” a film about the nightlife of young people in Iraq.

Ali's film takes place against the backdrop of credible threats by militant groups against homosexuals and anyone considered to be flamboyant in some way. Earlier this month, Karar Noushi, a young Iraqi actor and visual arts student, was stabbed and killed after being kidnapped by militias in Baghdad. Last year, Human Rights Watch documented kidnappings, executions and torture of gay men and men perceived to be gay by militia groups, including Muqtada al-Sadr’s Mahdi Army.

Ali's and Kwaish's films have both proven to be award winners, garnering international attention. In May, Ali's film “Gemini” (Al-Jawza) won the Silver Award at Baghdad University's International Film and Television Festival for students at the Faculty of Fine Arts. The film — which tells the story of a girl who has a sexual relationship with a female friend — is scheduled to be screened at the Dubai Film Festival in December.

“Gemini” is Ali’s first short feature. She also stars in it. “Homosexuality has [always] existed in [Iraqi] society, but people do not talk about it,” Ali told Al-Monitor. “I wanted to present something that would examine this idea in a moderate way without coming off as indecent or offensive.”

Ali further stated, “My main concern while making the movie was not whether the audience would accept it or not. What I wanted to do was make a movie that would look at a problem in our society that no one has touched upon before.”

Ali, known for her social activism, admitted that she felt “scared for a moment” when the film was first screened, but the harsh criticism she thought she might face never came to be. Her professors supported her making the film, and when it was screened, members of the audience were impressed by the idea and how it was presented and treated, she said.

Kwaish’s short films have been shown at the Cannes Film Festival and at the Mizna Twin Cities Arab Film Festival, held in the United States, in Minnesota, where his film “A Nation Without a Homeland” received an award in 2015. “My job as a filmmaker is to break taboos and address them like any other subject,” he told Al-Monitor.

Since he started making short films, in 2008, Kwaish has been documenting protests and demonstrations in Iraq with his iPhone. He worked for four years on “Disco Baghdad,” a feature about a group of young men trying to open a club in Baghdad, which Kwaish calls the “city of death.”

Kwaish often relies on international film festivals to have his movies screened, as he has had difficulty showing them in Iraq. “Frankly, I was very scared of showing my films in Iraq. I once got the courage to rent a space to screen one of my movies. I told the people in charge that the movie did not deal with any thorny issues, but in fact it was a short film on demonstrations in Iraq.”

The film industry does not have a long or strong history in Iraq. Since the founding of the modern Iraqi state in 1921 until the fall of President Saddam Hussein in 2003, there have been about 100 films produced in the country, many of them according to the mood and whims of the country’s authorities.

After the US-led invasion of Iraq in 2003, many young people began to show an interest in cinema, thus producing a new generation of filmmakers who unfortunately face major obstacles in financing their work. There are no local funds to support them, and the national government pays no attention to art.

“Iraq is a very young country when it comes to the film industry. There is no cinematic support in Iraq except for some attempts by the Iraqi Independent Film Center and Art City for Production,” Kwaish said.

Ali says production is the main problem for people working in film because of the lack of government support for cinema and only very little from private companies. In addition to the dearth of financial support, Iraq also lacks theaters and other venues for screenings.

“All movie theaters have been turned into stores, warehouses or theaters for live performances,” Kwaish said. The few remaining movie theaters are restricted to commercial malls.

Despite this, both young directors remain determined to follow their chosen paths. Kwaish, studying in France, is working on finishing another movie. “The film tells the story of a girl who gets her period for the first time and how she deals with it and how a sheikh tries to sexually harass her, as he fails to see the child that she is,” Kwaish said. Meanwhile, Ali was coy about his future project, saying, “In my next movie I will break another taboo, but [I] will not talk about it now,”

Their taboo-breaking movies have only been screened for small groups of intellectuals in Iraq, so one cannot gauge Iraqi society’s view of them. For the moment, screening independent movies for larger audiences is not an option.