Despite their support for moderate President Hassan Rouhani, Iranian film directors remain under the same kind of pressure from the authorities they faced during earlier administrations. 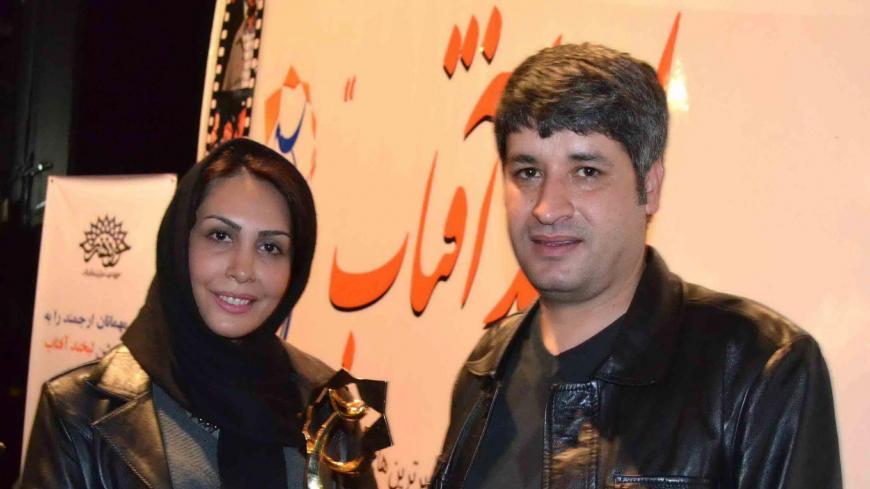 On Dec. 22, Tehran police announced that they had arrested 230 individuals in raids on two parties marking the Iranian holiday of Yalda, a celebration of the winter solstice. Police said that the parties were of mixed gender and that the guests were dancing and consuming alcohol.

A lot of people reacted to the announcement on social networks, including filmmaker Abdolreza Kahani, who has directed two films that are banned in Iran. Kahani tweeted, “They say that the subjects and characters in my films promote bad behavior and are unrealistic. So, these people you have just arrested are imaginary?”

Previously, on Dec. 15, the US-based Center for Human Rights in Iran had cited a source as saying that the Ministry of Culture and Islamic Guidance had — in a first — “respectfully” asked Kahani verbally not to screen his outlawed 2016 movie "Delighted" in Canada. The movie reportedly tells the story of three young girls in Tehran who have illicit relationships with men.

On Dec. 18, in an interview with BBC Persian, fellow Iranian director Mohammad Rasoulof, this year’s winner of the top prize in the Un Certain Regard category at the Cannes Film Festival for his movie “A Man of Integrity,” said the security services had told him to expect more interrogations. Rasoulof, who is a member of the Academy of Motion Pictures Arts and Sciences, had his passport confiscated at Tehran’s international airport Sept. 15 upon returning from Colorado after his film was screened at the Telluride Film Festival. He was later summoned to the prosecutor's office to answer to charges of “assembly and collusion against national security and propaganda against the state.”

More than 17,000 filmmakers from around the world signed a petition asking the charges be dropped. Rasoulof has been arrested previously: In October 2011, he was sentenced to one year in prison on similar charges involving a film about the unrest in the aftermath of the disputed 2009 presidential elections.

The 2014 movie stirred great controversy when it was screened at the Fajr Film Festival for the first time in February of that year. Its plot revolves around “starred” students — a term used to denote those banned from pursuing higher education by the authorities for their political or religious beliefs and activities — during the presidency of Mahmoud Ahmadinejad (2005-2013) and after the 2009 presidential elections.

In October 2014, while the movie was still publicly screened, the speaker of the parliament’s Article 90 commission announced that the head of his commission had written a letter to the deputy minister of culture and Islamic guidance to ask him to prevent the screening of “movies which are about sedition.” In state discourse, the unrest following the 2009 vote is referred to as “the sedition.”

Last year, the leadership council of the Union for Screening Films said the movie had been granted a screening license for the fifth time and would be screened in movie theaters across the country Dec. 20. But on Dec. 17, the Student Basij of the Imam Sadiq University wrote a letter to the minister of culture and Islamic guidance, saying, “If you do not prevent this movie from being screened, you will be punished by the Student Basij and the rest of the noble Iranian nation.” The next day, the council announced that the movie would be banned until further notice. These kinds of developments in relation to culture and the arts have raised questions about whether the minister of culture and Islamic guidance is determined to deliver on the administration’s promise of creating a civil society and supporting the rights of filmmakers, and also whether the ministry has the power to confront radical political forces in Iran.

In the campaigning leading up to the 2013 presidential elections, the majority of filmmakers supported moderate Hassan Rouhani. Among their main demands were permission to reopen the House of Cinema and a solution to the rampant outlawing of films. After Rouhani’s election, the House of Cinema — which was closed down amid the unrest in 2009 on the orders of Tehran’s persecutor at that time — was finally reopened in September 2013. The fate of banned films, however, was a little more complicated and while some of them received the licenses needed for screening, others remained outlawed.

In June, as Rouhani’s first term was coming to an end, then minister of culture and Islamic guidance Reza Salehi Amiri wrote a letter to Mohammad Mahdi Heydarian, head of the Cinema Institution — a part of the ministry responsible for issuing screening licenses — and asked him to make a decision regarding the banned films in two months.

On Sept. 15, Ebrahim Daroogheh Zadeh, the vice president for supervision and evaluation of the Cinema Institution, announced in an interview on state TV that a committee formed on the orders of the Ministry of Culture and Islamic Guidance had evaluated 12 banned films and that five of them, whose directors and producers had agreed to make necessary adjustments, had been granted screening licenses. Daroogheh Zadeh said, “Some of these films were banned due to the political situation of the country back when they were first made and others were banned due to a misunderstanding or certain reading of them. A lot of these problems were solved on their own as time went by.”

Abolhassan Davoodi, a veteran Iranian director and a former head of the House of Cinema, says that the reason for most of these bans were “unlawful disagreements and political leanings.” Davoodi’s “Zadboom,” which was screened at the Fajr Film Festival in 2009, won several awards including best national film. It was one of the famous films banned from public screening during the Ahmadinejad administration.

The movie tells the story of a family whose members each live in a different part of the world, with one of them serving as the vice president to one of the presidential candidates in Iran. Davoodi believes that the “incidents” following the 2009 presidential elections are the reason his movie was banned.

Finally, after six years, and without any changes made to it, “Zadboom” was granted a screening license during Rouhani’s first term as president. Davoodi commented, “So far no official or unofficial person has explained to me why this film was banned in the first place. When ‘Zadboom’ was first banned, during Ahmadinejad’s presidency, I said that I would not make any other films until the situation is clarified regarding my film. After the ban was removed, I started to work on my new film.” He added, “I have to say, however, that the Iranian filmmakers are still dealing with a lot of problems, problems that have always existed regardless of which administration is in power."