In Iran, controversy erupts as "Resurrection," an award-winning film about a Shiite imam, is banned over objections from senior clerics. 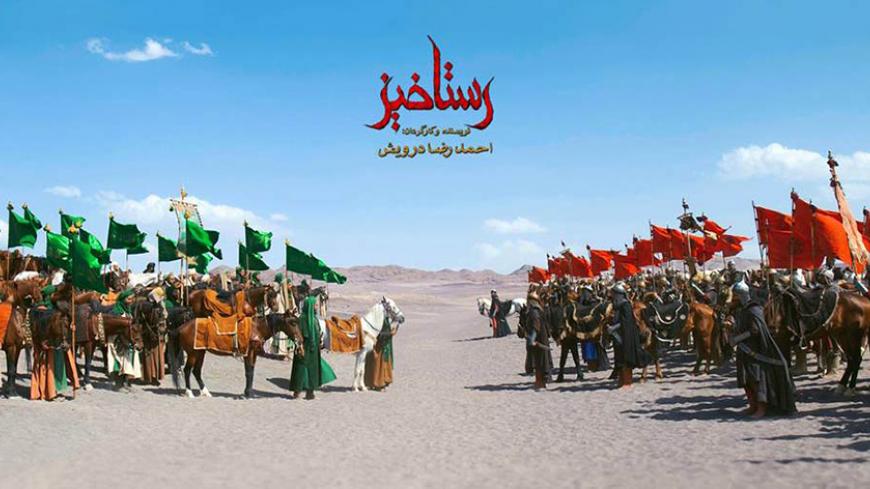 A promotional image depicts a scene from the movie “Rastakhiz” (Resurrection), which is directed by celebrated Iranian filmmaker Ahmad Reza Darvish and portrays parts of the life of the Prophet Muhammad’s grandson, Hussein. - Farabi Cinema Foundation

TEHRAN — The banning of a big-budget religious film has once again ignited controversy over freedom of speech in Iran’s cultural scene.

Following criticism by senior clerics, Iran’s Cinema Organization — which operates under the supervision of the Ministry of Culture and Islamic Guidance — announced that “Rastakhiz” (Resurrection) won’t be screened. Directed by celebrated Iranian filmmaker Ahmad Reza Darvish, the film portrays parts of the life of the Prophet Muhammad’s grandson, Hussein.

Hussein, the third imam in Shiite Islam, is revered for his and his followers’ revolt against Caliph Yazid, which ended with slaughter. This battle, marked by Shiites on Ashoura (the 10th day of the Islamic lunar month Muharram), has been a key symbol for Shiite revolutionaries both before and after Iran’s 1979 Islamic Revolution. The religious and political significance of Ashoura thus ignites sensitivities whenever it’s addressed.

The criticism of "Rastakhiz" centers on its depiction of Hussein’s half-brother Abbas, one of the principal martyrs of Ashoura. Senior clerics in the holy city of Qom, including Ayatollah Makarem Shirazi, Ayatollah Alavi Gorgani, Ayatollah Sobhani and Ayatollah Vahid Dastgerdi, have lashed out at how Abbas’ face is shown in the film. Of note, mainstream Shiite jurisprudence forbids reproduction of the faces of the 12 imams and their kin. However, such images are widely available and popular.

"Rastakhiz" made its debut at the Sacred Defense Museum in Tehran on July 13 and was set to be screened across the country July 15. However, on its opening day, hundreds of protesters close to the paramilitary Basij gathered outside the Ministry of Culture as well as Shekoofeh Cinema on Tehran’s Martyrs’ Square. In response, the ministry announced a halt to screenings, pending modifications demanded by the protesters. A Shekoofeh Cinema employee told Al-Monitor, “They were many. They were angry and were shouting slogans. They even wanted to break into the cinema, but the police prevented them. It was truly scary.”

With a production budget of 120 billion rials ($3.53 million), "Rastakhiz" is one of the most expensive films in the history of Iranian cinema. It has won eight awards and was named best film at the Fajr Film Festival, the most important cinematic event in Iran.

This isn’t the first time that there has been controversy over depictions of Abbas’ face. Celebrated Iranian director Davoud Mirbagheri once requested permission from clerics to show Abbas' face for his popular religious TV series, “Mokhtarnameh,” and was met with stern opposition. Indeed, prior to "Rastakhiz," the custom in Iranian cinema and television has been that faces of the 12 Shiite imams be shown as illuminations. This was the case in Mirbagheri’s TV series “Imam Ali,” which aired on Iranian state television in 1997, and also in his two later series “Tanhatarin Sardar” (The Loneliest General) and “Revayat-e-Eshgh” (Narration of Love), which respectively address the lives of the second (Hassan) and eighth (Reza/Ridha) Shiite imams.

Shiites consider the imams and Lady Fatimah, the daughter of Muhammad and mother of Hussein, as infallible. It is perhaps for this reason that depictions of their faces are frowned upon. However, some intellectuals and clerics dispute the notion that Islam prohibits the latter.

In an interview with Al-Monitor, Iranian political dissident and cleric Mohsen Kadivar criticized the ban on "Rastakhiz": “The reasons given by critics lack all credibility according to Islamic jurisprudence. The portrayal of figures from the early period of Islam … has no legal prohibition in Islamic law. The ban on depictions of the prophet is because the consensus among Muslims does not tolerate such things. As for the depiction of imams, Shiite Muslims claim to have consensus among themselves. However, both these consensuses are questionable and full of ifs and buts.” Even if these prohibitions are recognized, their extension to other Islamic figures is questioned. Kadivar pointed to Abbas, saying, “Portrayals of the gallantry of these beloved religious heroes will promote religion and strengthen the faith of the believers.”

Every year, the faces of Hussein and other Islamic figures are depicted in ta’ziyeh (street theaters) across Iran, where the tragedy of Ashoura is re-enacted. Yet, no senior cleric has criticized this. Indeed, Kadivar told Al-Monitor, “What is the difference between these street theaters and a film for the cinema or television?”

The approach adopted by conservative clerics and some Basij members has thus raised speculation about a political dimension to their criticism of "Rastakhiz."

For instance, in the 2007 series “Masih, Rouh Khoda” ("Christ, Spirit of God"), produced by Nader Talebzadeh — who is close to the Principlists — the face of Jesus Christ was depicted. However, conservative clerics and other Principlist forces raised no objections. Talebzadeh’s series was notably later screened full-feature length in cinemas.

It appears that the past of the film's director may play a role in the debacle surrounding the film. Darvish directed a campaign video for 2009 presidential hopeful Mir Hossein Mousavi, who has been under house arrest since the unrest following that vote. Darvish is also part of the group of filmmakers who have continuously supported the reform movement.

In an interview with Al-Monitor, Reformist political activist and journalist Hossein Naghashi said the main driving force of the criticism of the film “is not religious concerns, but politics, pursuit of power and undermining of rivals. If the concern was religious, many of the [previous] conservative government’s actions would also have raised similar issues.”

Meanwhile, prominent University of Tehran professor Sadegh Zibakalam has penned an open letter in which he criticizes the ban on "Rastakhiz." Addressing the film’s critics, Zibakalam asks whether the same ire would be raised had it been directed by filmmakers associated with Principlist and hard-line forces: “Don’t address your answer to this question to me. Look into the eyes of Ahmad Reza Darvish and answer him.”

In late July, a Ministry of Culture spokesman told reporters that the plan — in coordination with the director — is to alter controversial scenes with the use of light effects and then re-screen it. This is while Darvish said no changes will be made to "Rastakhiz" after it was taken off screens. No new date has so far been announced for the film’s return to cinemas. In the meantime, the moderate government’s retreat in the face of conservative pressure has not been left without criticism, including from Darvish.

Indeed, it seems that the maneuvering against "Rastakhiz" is a continuation of efforts to undermine President Hassan Rouhani’s social and cultural agenda, which emphasizes openness. A political analyst in Tehran who preferred to remain anonymous told Al-Monitor, “Many believe that after the signing of the nuclear agreement [with six world powers], Rouhani plans to implement serious reforms related to freedom of speech. I think these protests are a severe message from the extremists that such reforms will not be tolerated.”