The Fajr International Film Festival's ambitious director is determined to get the festival top rankings by focusing on regional issues and high-profile guests. 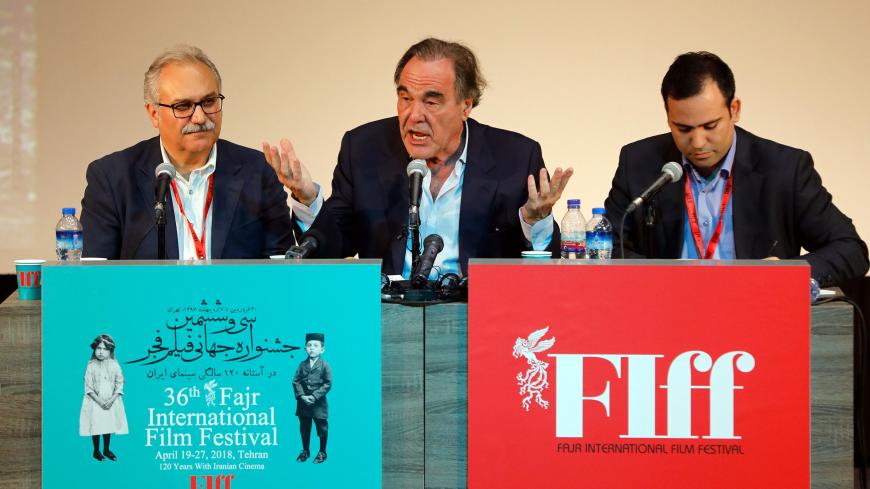 Iran’s Fajr International Film Festival has been an important platform for Iranian, regional and international films for more than three decades. But this year’s edition, which took place April 19-27, proved to be more mediatic and controversial than the previous years. This was partly due to the high-profile participants — in particular Oliver Stone, the American writer and filmmaker whose remarks from Tehran spurred a debate on the liberty of artists in Iran.

Raising the profile of the festival, which was launched in 1982, is one of the main goals of Reza Mirkarimi, an award-winning Iranian director who took the helm three years ago. Speaking at a press conference April 12, Mirkarimi said that he wanted to boost Fajr’s international profile and recognition, explaining that he invited the Paris-based International Federation of Film Producers Associations to the festival last year. The move was aimed at getting the federation to accredit the Fajr International Film Festival as a “category A” festival, meaning a “specialized festival” in the same rank as the film festivals in Berlin and Venice.

At the final award ceremony, the award for best film went to “Aga,” a story about an elderly Inuit couple. Alexey German Jr. received the award for best director for “Dovlatov,” the biography of Russian writer Sergei Dovlatov. Iran’s Mahoor Alvand won the award for best actress and Ramtin Lavafi for best script, both for the psychological drama “Hattrick.”

Ahad Mikaeil Zadeh, the director of “Broken Olive Branches,” told Azad news agency April 8 that this section aimed to showcase films of countries that have been involved in combating terrorists and "takfiris," a word used for groups such as the Islamic State, or a country such as Palestine that has been resisting against the “Zionist regime.”

Khaled Ghodomi, Hamas' representative in Iran, attended some “Broken Olive Branches" film screenings April 26. Ghodomi said that the Iranian cinema’s approach is close to the Palestinian culture and resistance. “The Islamic Republic seeks to promote the culture of resistance in the world. Iran’s film industry and the Fajr International Film Festival are heading in the same direction. Palestinian producers attend the festival and [their] films have been screened in Iran in the past. These cultural exchanges can help strengthen Iranian-Palestinian relations,” he said.

In addition to the screening of films, workshops were held during the festival — under the title "Dar ul-Funun,” a reference to the name of the first modern university and institution of higher learning in Iran, established in 1851 — that were attended by 55 Iranian students and 55 students from 31 countries. The workshops focused on filmmaking, acting and screenwriting, with sessions attended by award-winning filmmakers such as Italian film editor Roberto Perpignani and American writer and director Oliver Stone.

Stone attracted much media attention, as he gave several talks, attended workshops and Q&A sessions, and made a TV appearance. He said at an April 25 press conference that his son Sean had traveled to Iran and encouraged his father to visit the country.

“I have come under heavy fire from the conservative, hard-line Israeli press for my trip to Iran,” Stone said.

In response to a question about the negative reaction of some Israeli and Western media about Stone’s trip to Tehran, Mirkarimi told Reformist Arman daily April 30 that Stone had received emails, some of which were abusive, asking him to cancel his trip.

Stone denied that he was making a documentary about Iran’s former hard-line President Mahmoud Ahmadinejad. “I have no plan at this time to do a [documentary about] an Iranian politician or leader. I saw a false story the other day printed somewhere about my asking Mr. Ahmadinejad for an interview in 2007, or 2006. Let me make this very clear, I have never asked him for an interview either,” he said.

Stone did not spare the United States in his criticism. The National quoted him as saying, “We [the US] have always been involved in wars in the Middle East from Iraq to Afghanistan, Libya, Syria and now Iran, which has never been off the map. It has always been a target … we are dealing with the issue of Afghanistan for more than 18 years. Why?"

Panahi, who won the Golden Lion at the 2000 Venice Film Festival for “The Circle” and the Silver Bear at the 2006 Berlin Film Festival for “Offside,” wrote on his Instagram page April 27, “Has Oliver Stone been called a traitor for his harsh criticism against the political system and the politicians of his country? Why do Michael Moore, Oliver Stone and others have the right to express themselves and make films, but Iranian filmmakers must keep silent?”

Panahi, who has been banned from exiting the country and making films for 20 years following a 2010 verdict, immediately got a reply from the Kayhan newspaper, which is the mouthpiece of Iranian hard-liners. In a scathing editorial, the paper wrote April 28 that Stone is a supporter of the US political establishment and had even made a film, “Snowden,” to defend the US Constitution and criticize the violation of constitutional rights following illegal eavesdropping by the US National Security Agency. “It seems that Panahi's illusion is so [serious] that he didn’t hear the core part of Stone’s remarks that defended the political system of the US. He even defended two of the most hated US presidents, [Richard] Nixon and [George W.] Bush. [While making films about the two ex-presidents], he had put himself in their shoes and had sought to understand them. … [In Iran] he called Bush 'bold,'” Kayhan wrote.

Fueling the controversy further, Masoud Farasati, a prominent Iranian film critic known for his harsh opinions of films, directors and actors, gave an interview to Reformist Shahrvand daily, slamming Stone and the Iranians who saw his words as a sign of freedom. “Neither Stone, nor Michael Moore and certainly none of the famous filmmakers of today's American cinema are willing to go too far [in their criticisms]. They can [only] criticize up to a [certain] point. They can criticize their presidents, their flag, but not their system,” he said.