The new film of Ebrahim Hatamikia criticizing Reformist-backed President Hassan Rouhani was warmly welcomed by radicals, but interpreted by others as an unexpected shift in the controversial director’s loyalties. 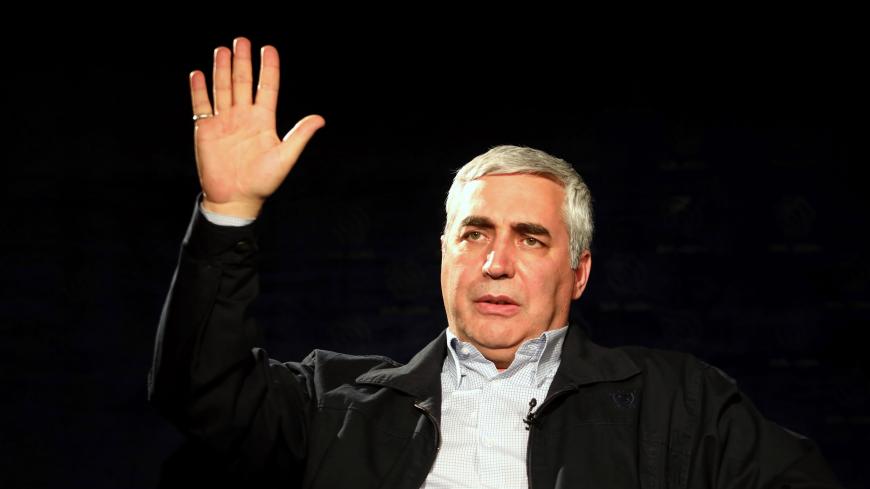 Ebrahim Hatamikia, Iran’s award-winning director known for his films on the Iraq-Iran War, has made headlines again with his new film “Exit,” a political drama about a group of farmers driving their tractors in protest to the presidential palace.

Iran’s moderates accused the director of making the film to please the country’s hard-liners, pointing out that the film was financed by Owj Arts and Media Organization, which is tied to the Islamic Revolutionary Guard Corps (IRGC). During a Feb. 8 press conference, Hatamikia denied that he has ever made films on request, or ever will.

The son of an Iranian Azeri family, Hatamikia started his career in the film industry as a scriptwriter. He directed his first film, “The Identity,” in 1986 and followed it with a series of documentaries on the Iraq-Iran War, known as the “sacred defense” in Iran. The ideals of the 1979 Islamic Revolution and the heroism of Iranian soldiers sacrificing their lives for their homeland were recurrent themes in his earlier films.

Over the past four decades, Hatamikia has made contentious social and political films, including “From Karkheh to Rhein” (1993) and “The Glass Agency” (1998). The former narrates the story of an Iranian veteran passing away in Berlin as the result of the chemical weapons Germany sold to Iraq during the war, and the latter portrays the isolation and destitution of Iraq-Iran War veterans once society and the government forget their sacrifices and leave them to fend for themselves.

In the 2000s, Hatamikia tackled another sensitive subject — Iran’s security apparatus. “The Color Purple,” directed in 2005, narrates the story of an undercover intelligence officer who falls in love with a college student whose father, one of the leaders of the opposition, was a target. The Ministry of Intelligence objected to the film, which was banned until 2010.

In the 2009 presidential election, Reformist candidates Mir Hossein Mousavi and Mehdi Karroubi announced that the ballots were rigged, leading to massive protests across Iran and imprisonment of critics. To the shock of radicals, Hatamikia publicly declared in 2014 that he had voted for Mousavi and even retold the story of how his sons used his megaphone to shout slogans against hard-liner Mahmoud Ahmadinejad, who won the 2009 elections.

Merely a year after the lifting of the ban on “The Color Purple,” Hatamikia made another film that was banned as well. “The Report of a Party" focused on the 2009 post-election events that led to the house arrest of Mousavi and Karroubi. The film was screened only once, at the Fajr International Film Festival, before being banned. Hard-line Raja news site slammed Hatamikia for making a film in favor of Mousavi and his wife Zahra Rahnavard, arguing that “Hatamikia has no right anymore to speak about the holy defense. … He had better speak about … the lady [Mousavi’s wife] of his city.”

Even before the film on Mousavi, Hatamikia had drawn the reaction of the radicals. In 2009, Kayhan newspaper, the mouthpiece of the hard-liners, railed against him saying that his recent films about the war were “in conflict with the concept of [Islamic Revolution] resistance.”

In 2016, Hatamikia said that he had voted for Hassan Rouhani in the 2013 presidential election, but added, “I, however, have the right to criticize him.” That same year, he accepted funding from Owj for his upcoming films “Bodyguard” (2016) and “Exit” (2020).

It is “Exit,” screened at Iran’s state-run main film event, the Fajr International Film Festival, that has created the most recent controversy. The film, screened for the first time in early February narrates the story of several farmers who drive their tractors to the presidential palace in protest of the economic and agricultural policies. On their way, the old farmers are stopped and arrested by the security forces; the president’s senior adviser makes promises, which are never fulfilled.

The film was lambasted by the Reformists immediately, who described it as a propaganda film commissioned by the radicals to undermine Rouhani. The government-run Iran newspaper described the film as “superficial” and “laughable.” Reformist Entekhab news site said Hatamikia’s talents as a filmmaker were diminishing and the only way he could get funding was by directly hitting the president.

The hard-liners rose to the director’s defense. “Hatamikia may well be Iran’s only star director who has never sold out his nation’s causes to make pseudo-intellectual gestures and [gain favor in] various festivals. Hatamikia is still by far the best Iranian director. His work isn’t [tied] to the Cannes and Berlin [film festivals] but to Iran and the Islamic Revolution,” wrote IRGC-affiliated Javan newspaper on Feb. 12. The commentary called “Exit” a film that “seeks justice” and urged the director to “pursue the path of justice.”

During the Feb. 8 press conference, Hatamikia responded to the criticism by saying that he was not worried about the critique, but that he did not like the insults thrown at him.

“What is my sin? That I’m a filmmaker? Why the articles and reactions are [similar to] the courts?” he asked, firmly denying that he made films “at anyone’s command.”

He boycotted the closing ceremony of the Fajr festival on Feb. 11, because he wasn’t nominated for an award in directing or screenwriting. In this vein, Kayhan daily took a swipe at the government, claiming that the festival jury was supposed to put “Exit” on the list of nominations for the best script and best director, but they were “dissuaded.”

Hard-line Fars News Agency, in a commentary Feb. 11, asked the jury just why the film was ignored. “Is it its critical and anti-governmental content that caused it to be ignored?” it said, adding that Hatamikia is used to film festivals ignoring him. “He is a protester and this issue leads [the officials] to ignore him, in the hope of silencing him.”

Despite his insistence on being independent, Hatamikia has clearly distanced himself from his past and is now recognized by the public as the desired director of the radicals — a filmmaker they have always yearned for. This change of direction toward the power centers could be costly for Hatamikia, as it would ultimately lead people to back away from Hatamikia and diminish a large part of his films’ audience.