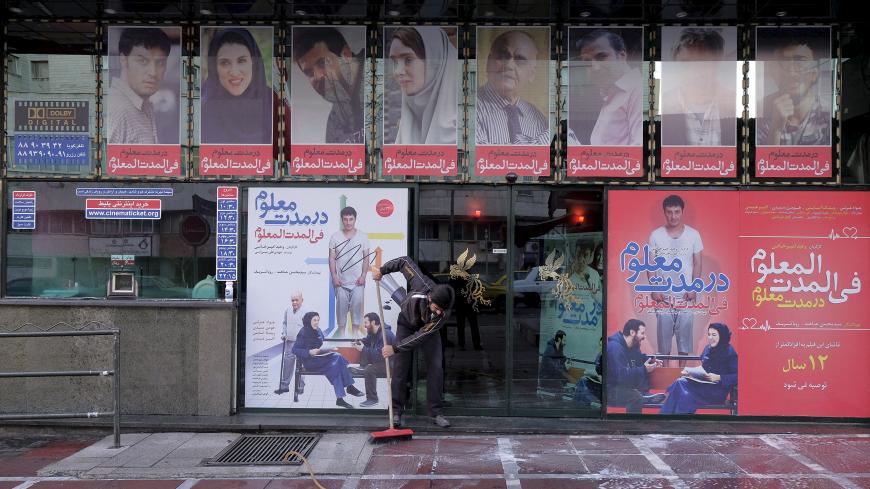 A worker cleans a sidewalk in front of a local cinema, Tehran, Iran, Jan. 16, 2016. - REUTERS/Raheb Homavandi/TIMA

“I am a dependent filmmaker. I am a man of the system. … I thank Owj [Arts and Media] Organization. They work hard and deserve the title of ‘The unknown soldiers of Imam Mahdi.’ I am honored to have made a film for ‘the defenders of the shrine’ [Iranian-led soldiers in Syria]. I am proud to have received an award from the Islamic Revolutionary Guard Corps [IRGC] and Maj. Gen. Qasem Soleimani for making this film.”

Iranian director Ebrahim Hatamikia made these comments at the 36th International Fajr Film Festival in Tehran last month. During the event, Hatamikia received the award for best director as well as best music and best sound mix for his film “Damascus Time.” The movie narrates the story of two Iranian pilots who are on a mission to save the people of the Syrian city of Palmyra from the Islamic State by transporting them to Damascus.

The movie has been praised by prominent Iranians, including Foreign Minister Mohammad Javad Zarif, who hailed it as a "masterpiece," and IRGC Quds Force commander Soleimani, who kissed Hatamikia on the forehead after seeing the film.

“Damascus Time” was made with the financial support of Owj Arts and Media Organization, which was set up as a nongovernmental organization in the spring of 2011. In recent years, Owj has played a prominent role in Iranian cinematic and television productions. However, there has been constant speculation about the source of its funding.

Owj took part in this year’s Fajr Film Festival with three movies, with the production costs of all three estimated at around 150 billion rials ($4 million). An Iranian cinematic source, who goes by the alias Pouya and has a history of collaborating with Owj, told Al-Monitor, “Everyone knows that Owj is funded by the IRGC. The IRGC gets its budget from the government. The nature of this funding is no different from what is given to other organizations for producing films. The reality is that Iran’s cinema is ultimately a government-owned business.”

On Feb. 17, during the closing ceremonies of the 7th Qoqnus Screen Awards, which honors revolutionary films, Mohammad-Hassani praised Hatamikia for his remarks at Fajr and said, “I am proud to get the money for our productions from the IRGC." He added, “We are proud of not having to ask foreign embassies for money to make our films.” Mohammad-Hassani is believed to have been alluding to “The Salesman,” a film by Iranian director Asghar Farhadi, which received part of its funding from the Doha Film Festival, an institute in Qatar. Implicit in Mohammad-Hassani's comments is that Qatar has provided support to hard-line Sunni Islamist groups that predominantly Shiite Iran has faced in Syria.

Hatamikia’s comments at Fajr also sparked various debates in Iranian media and social networks regarding independent versus state-owned cinema, sources of funding and the IRGC’s role in Iran’s film industry.

In a statement issued Feb. 13, IRGC commander Maj. Gen. Mohammad Ali Jafari praised Hatamikia’s allegiance to the Islamic Republic and said, “The IRGC has a responsibility to support any pure attempts in this path and aid the link between those fighting for jihad and martyrdom and activists in the field of arts and culture.”

Owj’s website describes the organization’s primary mission as “strategic policymaking in producing art that has an Islamic revolutionary discourse.” These productions have included the making of films, TV series and animations as well as holding exhibitions, launching cafes and mobile cinemas, publishing books and hosting poetry nights.

At an Aug. 7 press conference, Mohammad-Hassani described the activities of Owj and said, “Finding ideas is part of our efforts and attracting funds for implementing those ideas is another part. This is like a jihad. … We have no clear budget. We find ideas and direct all our efforts into it.”

Owj initially became a well-known name in Iranian media outlets in November 2013, as the nuclear negotiations between Iran and the six world powers started to intensify. At the time, billboards and banners that opposed the nuclear talks and discouraged any trust in the United States could be seen around Tehran, bearing the Owj logo.

Figures released by Mohammad-Hassani show that during Owj’s six years of activity, 11,000 works have been produced in collaboration with 2,600 artists. These include 700 documentaries as well as 11 cinematic and 400 motion graphic creations. The Owj director says content has always been the main focus of these productions. According to Mohammad-Hassani, Owj will produce 12 cinematic pieces next year with some “surprising” names joining its list of directors.

Filmmaker Bahram Tavakoli, who is known as an independent filmmaker, already surprised Iran’s cinema community after taking part in this year's Fajr Film Festival with the movie “The Abu Ghraib Strait,” a war genre movie funded by Owj. The film, which has been praised by movie critics, won six awards, including best film and best director (along with Hatamikia) at Fajr.

In a press conference for his film, Tavakoli responded to reporters’ questions about his cooperation with government organizations and said, “In Iran, there is no such thing as independent cinema.” However, some members of the cinema community responded by saying they had not received government support for their productions.

Pouya says insufficient private funding is one reason why the cinema community works with Owj. He told Al-Monitor, “Owj belongs to a movement which has influence, power and financial resources. For instance, a director who wants to make a war genre movie should get resources from the IRGC. The holy defense cinema town [a 550-hectare (1,360-acre) location near Tehran used for making war and historical movies] belongs to the IRGC. All military equipment is in possession of the IRGC.”

The existence of arts and media organizations that receive all or part of their finances from public funds is not uncommon in Iran. The Farabi Cinema Foundation, the Art Institute and several other government or government-affiliated organizations are the primary investors in Iran’s cinema.

However, what has made the financial situation of Owj challenging is the material and spiritual support it receives from a military entity. The question is whether or not it is proper for the IRGC to finance Iran’s cinema. “No, it is not right," Pouya told Al-Monitor. "Because it is a military organization and its activities should remain in the military arena. But in the current situation there is nothing that can be done. … I think there is no problem … as long as it allows other groups to make films, too. In response, one can be passive and do nothing or one can accept the situation as the existing reality and work toward gradual reform.”