The freefall of Turkey's currency has provided new opportunities for foreigners looking to get into the country's real estate market. 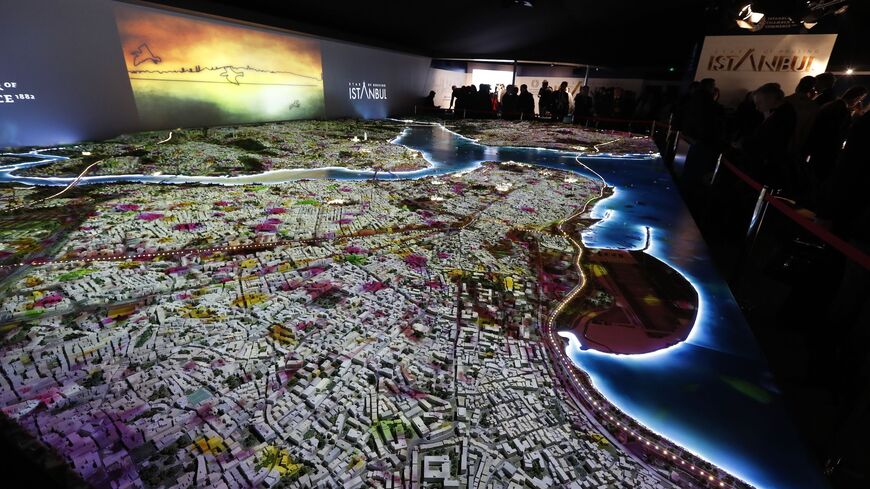 Visitors look at a scale model of the city of Istanbul at the Palais des Festivals in Cannes, southeastern France, during the international real estate show for professionals MIPIM on March 16, 2016. - VALERY HACHE/AFP via Getty Images

Turkey’s national currency, the lira, continued its downward spiral today after the Central Bank cut interest rates for the fourth time in a row. With inflation running at 20% and the lira shedding half of its value since the start of the year, millions of Turks are being pushed into deeper poverty as Turkish President Recep Tayyip Erdogan clings to the unorthodox view that lower interest rates will reign in inflation. But it's good news for the swelling number of foreigners fishing for bargains in the country’s property market.

Turkish house sales to foreigners leapt by nearly 50% last month, bringing in billions of dollars, according to Turkey’s state statistics agency. Some 7,363 houses, a record number, were sold to foreigners in November, compared with 4,962 houses in November 2020.

The largest number of customers were from Iran, followed by Iraq and Russia. The bulk of the sales were in Istanbul with 1,922 units. Around half that many were sold in Antalya, a popular resort on the Mediterranean and its soulless capital, Ankara.

“Many are buying houses to acquire Turkish citizenship,” said Erdem Senol, a real estate broker in Istanbul’s Beyoglu neighborhood, which continues to draws foreigners with its racy nightlife and breathtaking views of the Bosporus and Ottoman-era mosques and palaces. “Based on my time at the land office I would say that on average four out of every 10 sales are to foreigners, mostly Middle Easterners,” Senol told Al-Monitor.

In January 2017, Turkey’s ruling Justice and Development Party (AKP) government enacted a law allowing foreigners who invested a minimum of one million dollars in Turkish property to acquire citizenship. The move was sold as a means to lure foreign investment. The opposition charged it was designed to shore up Erdogan’s cronies, many of whom are in the contracting business.

Many benefited from global liquidity, building tower after tower of mass housing and elite residences on a growing pile of debt. The construction-led growth model worked for a while as highways and shiny new hospitals and schools mushroomed across the country, boosting the AKP’s popularity.

Many contractors began to struggle to repay their dollar- and euro-denominated loans, however, as the Turkish lira started its downward slide in the wake of the failed 2016 coup.

In 2018, the lira tanked and the AKP lowered the bar for citizenship. As of September 2018, any foreigner who buys property worth $250,000 is eligible for Turkish citizenship.

Many Turks view foreigners, particularly Arabs who acquire Turkish property, as a threat to their own culture. “They sold the country to the Arabs” has been a common refrain since the early 1980s, when the late Turgut Ozal, a liberalizing president and prime minister, encouraged Gulf states to invest in Turkey, including in the property market.

In March 2015, the pro-government Daily Sabah newspaper reported that Sheikh Tamim bin Hamad, the emir of Turkey’s close ally Qatar, had “secretly purchased” one of the most coveted waterfront palazzos on the Bosporus, once home to an Ottoman prince, for a whopping 100 million euros ($113 million).

Anti-Arab sentiments have grown with the influx of more than 3.7 million Syrians fleeing the decade-old civil conflict in their country.

“They used to buy properties mainly on the European side [of Istanbul] but now they have started to buy apartments here too,” said Murat Dramali, a broker in the Asian side's Fenerbahce, which is favored by secular upper-middle class “white Turks.”

Urban legends continue to circulate about the numbers of Syrians who have been granted citizenship, supposedly so that they can vote for the AKP in parliamentary and presidential elections. The government does little to dispel them and does not provide statistics on the numbers of foreigners who are granted nationality each year.

In 2019, faced with a barrage of such accusations ahead of nationwide municipal polls, Erdogan revealed that some 110,000 Syrians had acquired citizenship. Istanbul and Ankara fell to the pro-secular opposition candidates for the first time since 1994 and resentment felt toward the Syrians was cited as one of the reasons for the AKP’s losses.

Fethi Acikel, a member of parliament for the pro-secular main opposition Republican People’s Party who has fiercely criticized the government for its lack of transparency on the issue, asserted in a recent report that at least 150,000 Syrians had become Turkish.

Acikel charged that citizenship was being doled out with little scrutiny and that eight members of the Islamic State were among the beneficiaries. He based his charge on an April 2021 statement by the Interior Ministry listing the names of 365 individuals of foreign origin whose assets were frozen over their alleged terror links. The eight jihadis were listed as Turkish citizens.

In March, Acikel formally asked Interior Minister Suleyman Soylu to reveal the number of Syrians who were naturalized since 2011. Soylu skirted the question.

The Interior Ministry displayed more candor in 2019, when a citizen petitioned the parliament for information about foreigners getting nationality via real estate. The ministry responded that between 2017 and 2019, 7,312 foreigners became Turkish citizens as a result of their real estate investments. The majority then, as now, were from Iran and Iraq.