Erdogan shakes up foreign policy in response to economic crisis 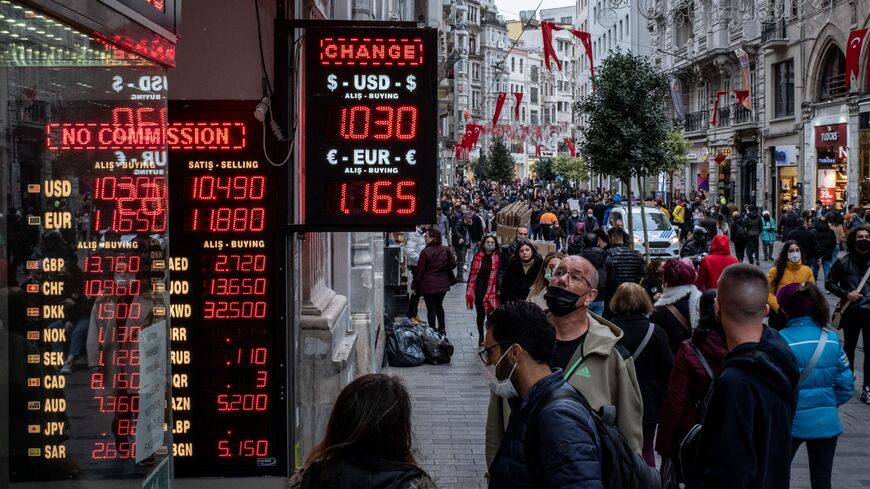 On Dec. 8, Turkish President Recep Tayyip Erdogan, who faces re-election in 2023, said that Turkey "is the breakout star of the global economic system that is being restructured with the pandemic."

That’s a tough sell these days. Turkey’s national currency, the lira, continued its downward spiral this week after the Central Bank cut interest rates for the fourth time in a row on December 16.

"With inflation running at 20% and the lira shedding half of its value since the start of the year, millions of Turks are being pushed into deeper poverty," Mustafa Sonmez reports.

On Dec. 17, the day after the rate cut, the lira plunged another 7% forcing Turkey to close its stock exchange.

While Turkish citizens are struggling with higher prices as a result of the devalued currency, well-to-do foreigners are reaping the benefits of a weak lira.

The lira’s plunge is "good news for the swelling number of foreigners fishing for bargains in the country’s property market," Amberin Zaman reports. "Turkish house sales to foreigners leapt by nearly 50 percent last month, bringing in billions of dollars, according to Turkey’s state statistics agency. Some 7,363 houses, a record number, were sold to foreigners in November, compared with 4,962 houses in November 2020. The largest number of customers were from Iran, followed by Iraq and Russia."

Escalating car prices have put automobiles increasingly beyond the reach of many Turkish citizens.

"The soaring prices owe not only to the nosediving lira but also the exorbitant taxes that Ankara levies on automobiles," writes Muhdan Saglam. "A 18 percent value-added tax and a special consumption tax that varies according to the vehicle’s base price and engine size. The total of taxes often exceeds the base price of the vehicle."

The weak lira has also made Turkish automobiles less expensive on the export market, boosting sales.

"The domestic market may be in turmoil," adds Saglam, "but Turkey’s automotive sector — home to the plants of major brands such as Renault, Fiat, Toyota and Hyundai — remains the country’s top exporter and ranks among the world’s top 15 automotive hubs. The sector’s exports totaled $25.5 billion in 2020, according to the Automotive Industry Exporters Association."

Normalization with Armenia won’t help the lira, but it's still potentially big

In the midst of the economic crisis, Turkish Foreign Minister Mevlut Cavusoglu announced this week that Turkey would normalize ties with Armenia and charter flights between Istanbul and Yerevan would resume.

The road to normalization is complicated by bitter ties between Turkey and Armenia, including Turkey’s unwillingness to recognize the genocide of Ottoman Armenians in 1915, Turkey’s backing of Azerbaijan in the Nagorno-Karabakh war, and Russian-Turkish competition for influence in Central Asia.

Abdullah Gül became the first Turkish head of state to visit Armenia in September 2008, initiating a brief thaw in relations.  Armenia signed normalization protocols in 2009, but relations soon soured again. US President Joe Biden recognized the Armenian genocide in an April 2021 statement, the first US president to do so, infuriating Turkey.

The dramatic announcement by Cavuscoglu this week, however, may not be enough to offset public attention to the economic crisis, if that was part of the intent of the move to normalize ties with Armenia.

Cengiz Candar writes that "While the devastatingly shaken country is on the verge of financial bankruptcy, normalization with Armenia would not yield any economic benefits for Erdogan to enhance his chances in the 2023 elections."

The real impetus behind the move, Candar points out, can be found in the agreement signed between Russia, Armenia and Azerbaijan that ended the Nagorno-Karabakh clashes in November 2020. Last fall Azerbaijan, backed by Turkey, reclaimed all territories in Nagorno-Karabakh lost to Armenia in 1993.

The agreement was more than a ceasefire; "it was a document that aimed to shape the region's future," Candar explains.

"The last provision of the deal calls for a setup of a corridor connecting mainland Azerbaijan with its autonomous exclave of Nakhichevan along the Turkish border," adds Candar. "Such a corridor would directly link Turkey to Azerbaijan on the Caspian Sea’s western shore and from there to other Turkic states in Central Asia, in line with a decades-old joint Turkish and Azeri aspiration. Establishment of corridors and roads linking regional countries to each other is also useful for China's ambitious Belt and Road Initiative."

"The jury is still out on whether Ankara or Moscow came out on top in the war over Nagorno-Karabakh or whether it was the latest iteration of their so-called "competitive cooperation," wherein the sides manage their differences in places like Syria and Libya and pursue their common interests," adds Amberin Zaman.

"But with its 'peacekeepers,' Russia retains leverage on both sides and has no intention of letting Azerbaijan control a proposed corridor between Nakhichevan and Azerbaijan proper, which is to be secured by more Russian troops."

A potential for a Turkish rapprochement with Armenia has been well received in Washington, and could help sagging US-Turkey ties.

Looking for a bailout in the Gulf

In January 2020, Saudi Arabia, the UAE, Bahrain and Egypt ended their three-year embargo of Qatar, easing back into more normal trade and security relationships within the GCC and the Arab League.

Turkey and Qatar have maintained close ties, and the Gulf reconciliation has allowed Turkey to open a new page in relations with the UAE and Saudi Arabia.

Ankara has had strained relationships with both Gulf states since 2011, when Turkey backed the Muslim Brotherhood and other Islamist groups during the Arab Spring.

The UAE considers the Brotherhood, which took power in Egypt via elections in 2011-2012, and was deposed by military coup in 2013, a terrorist organization.

Erdogan blamed the UAE for backing the failed coup in Turkey in 2016.

But that’s all changing.

Abu Dhabi Crown Prince Mohammed bin Zayed Al Nahyan pledged $10 billion in investments in Turkey during an ice-breaker visit to Ankara on Nov. 24; Erdogan is expected to return the visit in February.

The UAE "appears interested in Turkey’s defense industry, which has recently enjoyed international limelight over the impact that the Bayraktar TB2 drones made in various conflicts," writes Fehim Tastekin. "While Erdogan visited Doha [December 6-7], Emirati officials explored cooperation opportunities with defense companies in Turkey, including Aselsan, the largest."

"Ankara hopes that Saudi Arabia will move to thaw the ice with Turkey, too, to avoid falling behind the UAE amid its ongoing troubles in Yemen. Erdogan appears eager to make a sharp U-turn and shake hands with Saudi Crown Prince Mohammed bin Salman, whom Ankara held responsible for the 2018 slaying of journalist Jamal Khashoggi in the Saudi consulate in Istanbul,"  adds Tastekin.