Despite political tensions between Moscow and Ankara, Russians are increasingly purchasing property in Turkey. 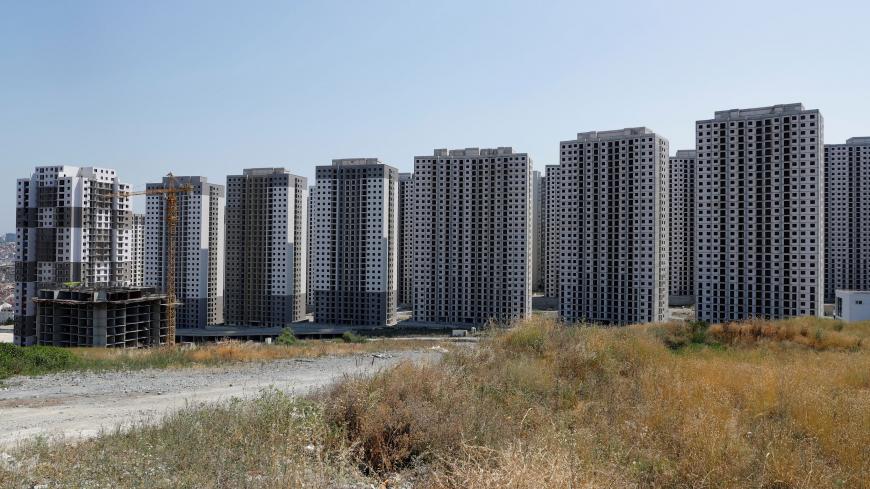 Russians are among the top five most active foreign real estate buyers in Turkey. According to the Turkish Statistical Institute (TurkStat), nearly 1.35 million housing units were sold in Turkey last year. Of those sales, at least 45,500 houses and apartments were bought by foreigners, marking a 14.7% increase from the previous year.

Real estate experts attribute the increase in Russian sales to low prices. The depreciation of the Turkish lira provided many Russians the opportunity to purchase Turkish property.

As a rule, Russians choose properties located near the sea, which costs less than $1,000 per square meter, according to Anastasiya Falei, a real estate analyst with Prian.ru.

"For this money they get high-quality new complexes with swimming pools, gyms, playgrounds for children," she told Al-Monitor. "New buildings in Turkey are very different from new buildings in Russia. Of course, comfort attracts a lot of Russian clients. Plus, the content of housing, taxes and the cost of living and recreation in Turkey are also relatively low."

Russians have also been drawn to Turkey for its warm climate. Many Russians appreciate that swimming season in Turkish resort areas can last from May till November. The Turkish climate annually attracts millions of Russian tourists, so it is logical that some have decided to buy property. On top of that, Russians can travel to Turkey visa-free, and low-cost flights are always available from many Russian cities to Turkey.

Turkey is a top destination for Russian tourists. Last January, during Turkish President Recep Tayyip Erdogan’s visit to Moscow, Turkey and Russia declared 2019 a "tourism year" to boost the number of Russian visitors to Turkey and Turkish visitors to Russia. The target was easily reached.

Russian buyers prefer houses and apartments in Antalya and Alanya, on the Mediterranean coast. Big cities are not so popular among Russians. For example, Russian buyers are not as interested in Istanbul or Bursa, where many other foreign buyers purchase property.

According to Falei, the typical Russian buyer is 35-50 years old. "It is a family with children," she said. "As a rule, they come from large Russian cities. These Russian customers view the purchase of housing in Turkey as a summer residence, where they plan to spend a long vacation with children and other relatives."

Igor and Elena, both in their early thirties, moved to Turkey from Moscow last year. They both work in information technology and plan to find permanent jobs in Turkey in the future. "We rent a four-room apartment in Alanya at the moment," the couple said. "But we are considering buying our own apartment or even a house next year."

"Turkey is a beautiful country with perfect warm climate, tasty food, fresh fruit and vegetables all year around," they said.

Many Russians buy apartments in Turkish resort areas for investment purposes, with plans to resell the properties in the future, when prices rise. Many apartments are sold while still under construction.

However, according to Falei, "Investment transactions are rare, because package tourism is very developed in Turkey. It is difficult for private owners to compete with hotels."

New Turkish citizenship rules are also among the reasons why Russians are investing in Turkish real estate. In 2018, Ankara simplified the rules for obtaining citizenship. Previously, to obtain a Turkish passport, it was necessary to invest $1 million in real estate. Now, $250,000 is enough.

Russians once preferred to buy houses in Spain, Bulgaria or Italy. Yet interest in European real estate is decreasing, and interest in Turkey is on the rise. According to Russia’s Forbes, Russian interest in Spanish property weakened. In 2018 Spain formed more than a third of all applications (35.1%), and in 2019 it formed just 18.4% of applications.

Real estate experts say that buying property in Turkey has been always popular with Russians. However, after the Turkish political crisis in November 2015, many Russians stopped buying houses. Now, as relations between Russia and Turkey normalize, more and more Russians are choosing Turkey.

That said, political strain between the two countries, especially with regard to Syria’s Idlib, makes Russian investors and buyers wonder if they are making the right choice and if they will have access to their properties in case of political tensions escalating.