Turkey’s real estate market is growing, fueled in part by interest from Arab and other foreign investment. 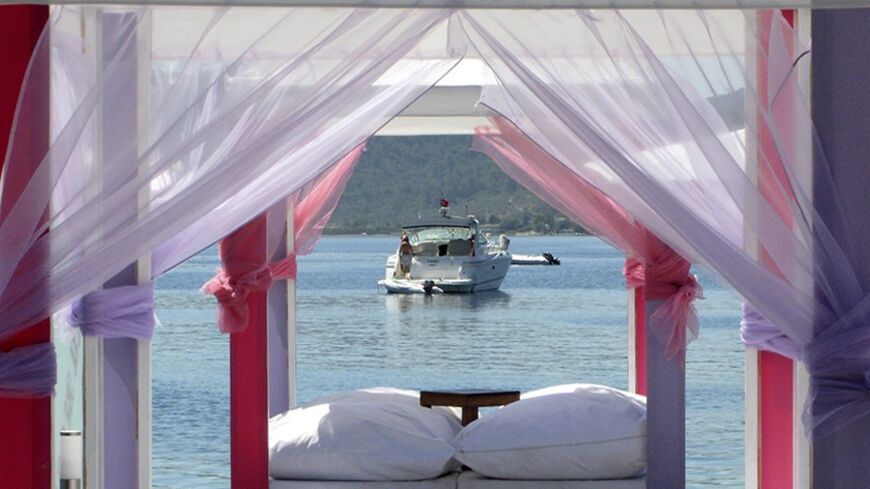 A private boat is seen framed by cushions and tulle curtains at a beach club in Golturkbuku, near the popular resort town Bodrum on the southwest Aegean coast of Turkey, July 17, 2007 - REUTERS/Fatih Saribas

On the night of March 30, as the results of the Turkish local elections became clear, the discussions took a new direction: what to expect from Prime Minister Recep Tayyip Erdogan in the upcoming presidential elections in August.

On morning after, the Turkish stock market responded positively to the Justice and Development Party (AKP) win with a 1.95% gain at Turkey’s main stock exchange and a two-month high for the Turkish lira against the dollar at 2.163. At the moment, it seems that these results offered the best scenario for stabilizing the markets, though the elections might not mark the end of Turkey’s political crisis.

Despite all the ups and downs in the Turkish political scene, foreign investors continue to ambitiously pursue their projects in various sectors. The Wall Street Journal shed light recently on Turkey’s booming hotel development market, citing global hospitality companies claiming to be “undeterred by recent events.” The tourism industry seems to be resistant to internal tremors as well. The number of foreign visitors in February 2014 rose 6.6% in comparison to same month in 2013.

Among visitors from all corners of the world, Arab tourists in particular flock to Turkey in staggering numbers. In 2013, the number of tourists from fifteen Arab countries increased to 3,265,190, 9% higher than the previous year. The ever-increasing popularity of Turkish soap operas and Turkey's more affordable prices as compared to rival Dubai contribute to a large influx of Arab tourists. The visitors also claim to feel more at ease in Turkey, a majority Muslim country, than at some Western tourist destinations.

Arabs not only come to enjoy Turkey’s attractions as tourists — increasing numbers of them are involved in large real estate acquisitions. Foreigners from Germany, Great Britain and Russia are known for owning lot of Turkish coastal property in beach destinations like Alanya, Fethiye, Kemer or Bodrum. In the first ten months of 2013, about 15,000 foreigners bought a total of 21,691 pieces of property in Turkey. Now, Arabs are grabbing their piece of the Turkish real estate cake, the sixth in the "top-10 hottest real estate markets around the world” in December 2013. According to records from the first 10 months of 2013, Arabs bought 2,697 pieces of property in Turkey, a figure that will surpass that of other foreigners when current construction projects in Istanbul are completed.

The government’s efforts to attract "foreigners with money" to invest in Turkish real estate are nothing new. In 2012, the government enacted a bill that removed the condition of reciprocity and eased restrictions on the sale of real estate to foreign citizens and firms. That change translated into increased sales. The environment and urban planning Minister at the time, Erdogan Bayraktar, stated in September 2013 his expectations of “a total of $5 billion in revenue this year purely from real estate sales to foreigners.” The government has also been working to extend the duration of tourist visas and reduce the red tape binding residency permits.

At the recent convention Emlak 2013 in Istanbul, around ten thousand Arab visitors evaluated opportunities and new projects for villas, residences, shopping malls and office spaces. The properties were bought in lots of dozens, and sales amounted to $500 million in three days, compared to $120 million last year. Construction companies are now adapting their projects to meet the desires of Arab buyers. One of those companies is Babacan Construction, with its new $40 million Crown Palace project, suited to Arab buyers' taste preferences for residential layouts.

Yet, while new is fun and attractive, older villas are also high in demand. Arab billionaires’ realty interests still lie in the seaside residences — the prices of which can run into $100 million — in chic Istanbul Bosporus neighborhoods like Kandilli, Vanikoy, Kanlica, Beylerbeyi, Bebek and Yenikoy. Aside from Istanbul as the major destination, Arabs are buying villas close to Sapanca Lake and Kartepe, with increasing interest in the city of Bursa, an important historic center with beautiful natural surroundings. The Black Sea province of Trabzon is also among the more attractive spots for Arab tourists who wish to buy property in Turkey. Besides citizens of Saudi Arabia, most buyers from the region are from Iraq, Kuwait, the United Arab Emirates and Jordan.

The royal families from the Gulf region have also expressed their interest in Turkish real estate. Prince Bandar, the nephew of Saudi Arabia’s King Abdullah bin Abdulaziz al-Saud, was announced as one of the visitors at the recently held real estate fair in Istanbul. Haber 7 reported that “Enterprise General Trading Contracting Co.,” owned by Homoud Rashed Al-Homoud Al-Sabah, the nephew of Kuwait’s emir, agreed to be in charge of marketing and sales for projects like Metropolitan Istanbul or Tarlabasi 360 by Calik Holding/Gap Construction in Kuwait and the region. The Kuwaiti emir’s sister Sheikha Fariha Al-Ahmad Al-Jaber Al-Sabah is reported to have purchased a nine-room apartment at one of Sehrizar Konaklari's properties.

But while the Arabs infuse welcome money into the Turkish economy by buying real estate, some of their demands, stemming from their Arab culture, could cause serious debates and potential backlash in Turkey. For example, polygamous Arab men who buy property in Turkey have asked to be allowed to bring not just one wife who can receive a residence permit, according to existing law, but all their wives. Polygamy is not legal or openly practiced in Turkey. The authorities are dealing with an uneasy situation regarding these increasing demands. The local customs must not be ignored, especially in a highly polarized country like Turkey.

The Turkish population has its own sets of complaints, often based on nationalist biases. According to a survey of 5,000 people by the Association of Real Estate Investment Companies, 65.1% opposed real estate sales to foreigners, while only 27% did not mind. The builders themselves are also divided on the issue. Some construction companies now impose a 5% or 10% limit on house sales to foreigners. Others welcome more diversity. Many seem to not be convinced by arguments by politicians like Ali Babacan, who claims that foreigners “would contribute to the Turkish economy by bringing business opportunities with them.”

Certainly, these are not exclusively Turkish issues. Wealthy Arabs are known for owning some of the most expensive properties and prestigious companies around Europe. The French people seem to be the most uncomfortable with this fact, though their country benefits immensely. There are opposing reactions to what some call the “Qatarization of France,” where investors seem to offer an endless supply of money. The situation is not much different in terms of Arab investments in Great Britain or Germany. The Turkish government, like the builders, wants to join this train, and keep Turkey an attractive destination for potential investment. Many Turkish construction companies have opened offices in the Gulf region and invest a great deal of effort in promotion there.

Yet, for all of this to be possible, political and economic stability in the country are essential. Though the latest records show that the Turkish economy grew 4% in 2013, slightly higher than expected, and the Consumer Confidence Index increased 5% to 72.5 points in March 2014, many are worried. According to renowned economist Daron Acemoglu, Turkey “has entered a critical period and there is restrained optimism about the Turkish economy in institutions like the IMF.” He believes Turkey’s institutional weaknesses are highly problematic.

Those who are disappointed with the ruling AKP’s victory pessimistically forecast further instability and fewer freedoms. On the other hand, the government’s supporters now relish the familiar taste of electoral success. It remains to be seen how the real estate situation will unfold. In the meantime, Arabs keep buying.