Former Prime Minister Benjamin Netanyahu and other Israeli politicians are not only campaigning for Israel’s security, they are also using the Iran threat as means to political promotion. 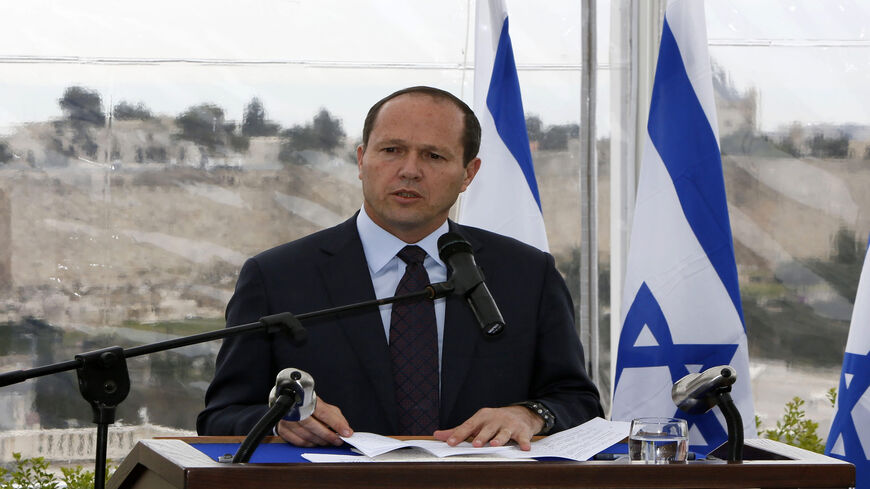 Knesset member Nir Barkat of the Likud poured quite a bit of money and effort into his latest corporate video. He is, after all, planning his campaign to replace former Prime Minister Benjamin Netanyahu as head of the Likud. His latest video shows him standing before the Capitol building in Washington, warning against the Iranian nuclear threat.

Barkat is one of Israel’s wealthiest politicians, with a net worth of approximately 1.3 billion Israeli shekels ($419 million). He flew to Washington 10 days ago for what he described as an important diplomatic mission. The video was released Dec. 15 and positioned prominently on all his social media accounts. His new media staff made sure to highlight selections from his speeches in English, all of them containing the same sharp, unequivocal message: “Iran is a radical Islamic regime: You must stop them …”

Media outlets, especially on the right, reported that Barkat met with 11 members of the House of Representatives and Senate, along with leading American public opinion shapers, in an effort to win their support against Iran. He visited Washington, Boston and New York, and even addressed the Israeli American Council (IAC) in Florida as representative of the Israeli opposition.

In his IAC talk, Barkat warned, “The Iranians want to create a bomb in order to use it. They teach their children to commit suicide and to wipe out Israel. There's nothing to talk about with someone who wants to throw you into the sea. You must stop them and must never let them have a bomb.”

If all that sounds in any way familiar, it is because this isn’t the first time that a right-wing Israeli politician has used the Iranian nuclear threat as part of an internal political campaign. The unchallenged master of this strategy was former Prime Minister Netanyahu. During his second stint as opposition leader, from 2006 to 2009, he turned what he called the “Iranian threat” into the main focus of his diplomatic and security agenda. He went on numerous, heavily promoted trips to the United States and Europe so that he could present this cause, and delivered dozens of speeches about it.

Upon returning to power, the Iranian nuclear threat remained a top priority, especially when it came to diplomacy and his defense policy, which included plans to launch an attack on Iran. There were years in which the Iranian issue was constantly at the top of his agenda. There were regular reports about how he and his then-Defense Minister Ehud Barak were planning to strike at Iran where it hurt.

In Israel, this focus on the “Iranian threat” declined in prominence somewhat during the Trump administration. With the nuclear talks now underway in Vienna, it is making a major comeback.

The leaders of the current coalition — Prime Minister Naftali Bennett, Foreign Minister Yair Lapid and Defense Minister Benny Gantz — are all involved in intense efforts to improve the superpowers’ agreement with Iran. They are even threatening to attack Iran’s nuclear facilities. They contend that Netanyahu let the threat get out of hand during his final years in office.

There is no doubt that the country’s current leadership inherited a problem, which ended up going unresolved during Netanyahu’s 12 years in office. If anything, the current conditions are even more challenging. On the one hand, there is a US administration that wants to reinstate the nuclear agreement after President Donald Trump withdrew from it. On the other hand, the government also has to prove to its voters that they have the competence to handle the problem.

This is why Bennett and Lapid frequently accuse Netanyahu publicly of neglecting Iran’s nuclear program and of leaving the Iranians closer now than ever before to obtaining a nuclear bomb. The press is peppered liberally with reports about their diplomatic efforts on the Iran front. These include coverage of Gantz’s visit to Washington last week to meet with Secretary of Defense Lloyd Austin and Secretary of State Antony Blinken. Gantz apparently informed both men that he instructed the Israel Defense Forces (IDF) to prepare plans to attack Iran’s nuclear facilities.

Lapid has adopted a similar tack. During a visit to Paris and London in late November, he spoke to those countries’ leaders about Israel’s need to defend itself against Iran.

Then there is Bennett, who had adopted an aggressive approach in dealing with Iran, much like Netanyahu did in his day. During tough talks with Blinken two weeks ago, Bennett argued that Iran is using “nuclear blackmail” as a negotiating tactic, and that the talks in Vienna should be ended summarily, to be replaced with harsh measures against Iran by the superpowers.

The fact that an official account of this conversation was released to the media by the spokesperson of the prime minister’s office seems to indicate that Bennett wants to boost his reputation as a statesman and security hawk. This is especially important to him, considering that polls show that the public has very little confidence in him.

The fact that Barkat is also using the Iranian card in his campaign is further evidence of an emerging trend. He is an ambitious politician from the Likud, who sees himself as Netanyahu’s presumptive heir. He commissions polls and focus groups regularly, and uses them to develop his political and media strategy. These have all led him to the conclusion that the Iranian nuclear threat is a hot-button issue, which can help him attain diplomatic prominence overseas, while winning him a reputation as a security hawk to his right-wing electorate. This, he believes, will help him put up a fight against “beloved leader” Netanyahu. Not only will it show Likud voters that Barkat can also deliver speeches in English about the Iranian nuclear threat, he can also do it in such a way that will prove to the outside world that he is determined to tackle the threat head-on.

The problem is that the person most closely identified with the Iranian nuclear threat has no plans to exit the arena. Once again, Netanyahu is taking center stage, presenting an alternative to the current government in dealing with Iran. At the same time, he is reminding loyal Likud supporters, who have since been exposed to Barkat, that he is the “original.”

Netanyahu is fighting an internal political battle, while at the same time trying to erode the confidence of the new government and cast doubt on its ability to deal with this existential threat.

In an address to the Likud Dec. 13, Netanyahu said, “Over the last few weeks, we have witnessed attempts by the government to overturn everything we did together to stop Iran and put an end to its nuclear program. We made plans. We passed budgets to fund this effort. My colleagues know this. Anyone who was in the Cabinet knows this. … I defined our efforts in dealing with Iran as the first priority in our approach to defense. I did this in forums with the IDF and our other security forces. That is why I hope that the briefings that I have been hearing recently are not intended to prepare people to accept this government’s inability to do what is necessary to protect Israel from Iran. We did it differently then and, God willing, we will do it differently again.”

Netanyahu knows a thing or two about campaigns. He is still in the arena, waiting for his chance to return to the prime minister’s office. And just like the last time he led the opposition, he is charging full steam ahead toward the Iranian campaign tiger.