Bracing for possible new elections, Israeli Defense Minister Benny Gantz is making the most of his public statements on the Iranian nuclear threat. 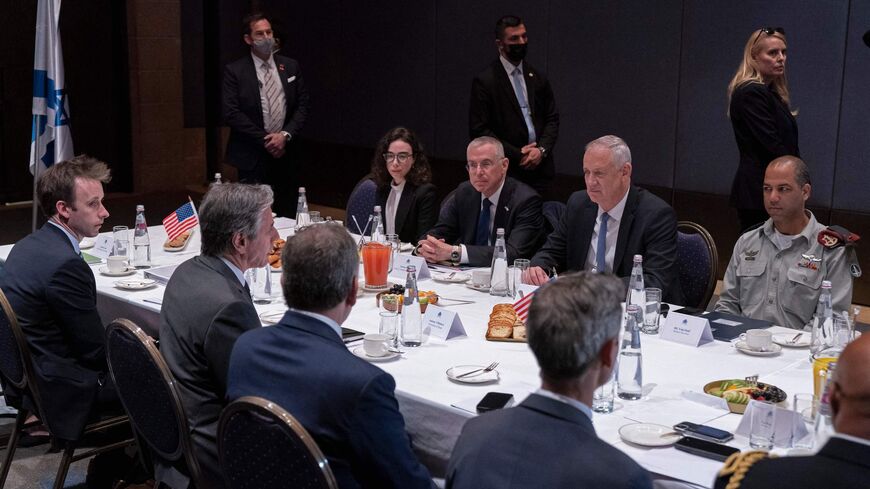 As far as the public agenda was concerned, the Iranian threat seemed to have been sidelined once the current government was formed. Only recently has it returned to the headlines, and in a big way. The person responsible is Defense Minister Benny Gantz, who flew to Washington May 18 for talks about Iran with his US counterparts.

Just one day before he left for DC, Gantz delivered a speech at Reichman University, warning of Iran’s accelerated progress toward a nuclear bomb. He also insinuated that Israel is preparing to attack Iran’s nuclear facilities. He noted that the cost of stopping Iran from obtaining a bomb will be much higher next year. If there has ever been a window of opportunity, it is now.

At a briefing just a few hours later, military reporters were notified that the possibility of a campaign in the north developing into a direct conflict with Iran and its allies will be the focus of an extensive IDF exercise. According to these reports, Israel’s security forces have already prepared offensive and defensive plans for such an exigency. The IDF has begun its “war month,” in which all branches of the military participate in the exercise, dubbed “Chariots of Fire.” It simulates an attack on Iran and culminates preparations by the army over the past year.

This brings us back to Gantz’s recent speech. It is not the first time the defense minister has warned that Iran is accumulating enriched uranium. Just last month, he offered his assessment that since August, "Iran has gone from 10 kg of 60% enriched uranium to 50 kg."

After many months in which Israel’s political and defense leadership maintained a low public profile when it came to Iran, Gantz is now going public. Allowing the press to cover the IDF’s preparations while he personally discusses Iran in Washington makes the matter all the more real.

The reason for it all is, of course, the nuclear talks between Iran and world powers. Israel is unhappy with their approach on sanctions against Iran. Senior officials in the Israeli defense establishment are saying that Israel feels on its own on blocking Iran’s nuclear efforts. Many in the defense establishment would like to see more significant operational cooperation with other countries in the region and the world. As a result, Gantz is applying greater pressure by signaling that Israel is serious about its plans to attack should the need arise.

On Thursday morning Israel time, Gantz tweeted about his meeting with US national security adviser Jake Sullivan at the White House. His tweet, which featured a photo of him with Sullivan, read, “In our meeting, I raised the need to take action against Iranian aggression and Iran’s progress in its nuclear project by strengthening cooperation between the defense establishments of our two countries and expanding cooperation with other moderate countries in the region.”

For the last few weeks, the Israeli government has faced an internal crisis that threatens to bring it down. Should that happen, an early election would be called, possibly within the next few months. As leader of the Blue and White, Gantz will be running against the leader of Yesh Atid, Foreign Minister and Alternate Prime Minister Yair Lapid, for the votes of the center-left.

Like all other Knesset members, he is well aware that new elections could be soon on the horizon. Thus, his focus on Iran’s nuclear activity also clearly has internal political motivations. On May 9, at the start of his Blue and White Knesset faction meeting, Gantz said he’ll “do everything to prevent elections.”

Judging by his statements and those of his associates, Gantz believes that his status as a former chief of staff and relatively long-serving defense minister offers him an advantage over Lapid and Prime Minister Naftali Bennett. His relationships with both are already tense. Gantz was supposed to become prime minister in the previous government, according to the rotation agreement. In the current government, he is only No. 3.

If new elections are announced, Gantz might run on a defense platform as the responsible candidate with far more experience than either of his competitors. While Bennett is about to complete his first full year as prime minister, polls show that he has failed to impress voters with his suitability to serve as prime minister. Lapid is also not seen as any kind of authority on defense affairs.

Gantz can be expected to continue talking about Iran and to position himself as spearheading the effort to block the threat by applying diplomatic pressure. His public dealing with the Iranian threat could give him chances to meet with world leaders and provide him with a platform to make public statements that will enter the country’s agenda.

He could fill the shoes of Mr. Security himself, opposition leader Benjamin Netanyahu. Ever since he last headed the opposition in 2006, Netanyahu has also made a political chip of the Iranian threat. He took it to the next level upon returning to the prime minister’s office in 2009.

One difference in the current situation is that in Netanyahu’s time, no one spoke officially about IDF exercises in preparation for an attack on Iran. Now, Israel is showing them to the entire world.

Gantz has to be aware that Bennett has the same capacity as prime minister to use the Iranian nuclear threat to his political advantage. On the other hand, Gantz’s associates estimate that Bennett is so distracted by his own political survival and the daily crises he faces that he will have less time to do so.

A senior figure close to Gantz told Al-Monitor on condition of anonymity that the Iranian nuclear threat is an urgent issue for Israel and for Gantz, but that there are also aspects of the issue being handled by Lapid. On the other hand, he admitted that the Iranian threat has political and electoral value for Gantz, saying, “Gantz needs to focus on his seniority when it comes to security issues, in dealing with a government, most of whose members lack his experience. As such, the two issues connect.”