So far, Prime Minister Naftali Bennett's meeting with Russian President Vladimir Putin and his phone calls with world leaders over the Ukraine crisis are not improving his standing at home. 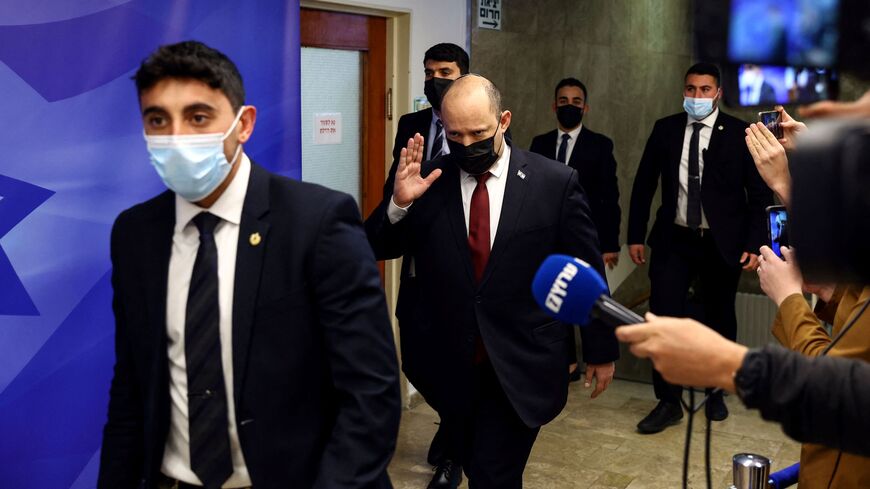 Israeli Prime Minister Naftali Bennett arrives to attend a cabinet meeting at his office in Jerusalem, on March 6, 2022. Earlier, Bennett held a three-hour meeting at the Kremlin with Vladimir Putin before calling Ukraine's president and flying to Berlin - RONEN ZVULUN/POOL/AFP via Getty Image

While Prime Minister Naftali Bennett has earned considerable media coverage as a mediator between Russia and Ukraine, this image can be deceptive. Even though Bennett is interacting with all the major figures in the ongoing global crisis, he is still a weak politician.

Bennett heads a party with just six seats, and all his travels in Europe have not managed to improve his party’s standing in the polls. Former prime minister Benjamin Netanyahu, who now leads the opposition, continues to overshadow him.

Justice Minister Gideon Saar has been pouring enormous energy into  legislation that would place an eight-year term limit on a serving prime minister. He  originally intended to pass the law, which is aimed at Netanyahu, before the Knesset leaves for its spring recess March 13. However, the coalition lacked the necessary 61 members to amend a Basic Law. It was a devastating blow to Saar’s reputation. Without 61 votes, he will have to wait until the Knesset returns from its recess in May.

With its majority of one, any single member of this narrow coalition can embarrass the government by blocking legislation. It’s not theoretical, either. The government has failed on more than one occasion in the last few weeks alone to get its agenda passed.

On Feb. 23, it was the defense minister himself, Blue and White party leader Benny Gantz, who announced that he was boycotting all votes to protest the delay in passing pensions for career soldiers. Before him, the Ra’am faction did not show up for votes, to protest the government’s failure to transfer the budgets it promised them in their entirety.

Another major crisis was the angry resignation of Minister Eli Avidar, accompanied by scathing criticism of the prime minister and his cabinet. Avidar is no longer subject to coalition discipline, which means that he can cause many more problems.

Although the Knesset is paralyzed much of the time, there is no immediate threat to the current government. Nevertheless, the current situation is unhealthy at best.

A survey conducted by Channel 13 just a few days ago, after Bennett’s surprising meeting with Russian President Vladimir Putin, reported that 49% of respondents said that Netanyahu would have managed the crisis better. Only 23% said Bennett did a good job with it. When asked who is best suited to serve as prime minister, 50% answered Netanyahu, while only 20% said Bennett. Foreign Minister Yair Lapid received the support of 17% of respondents, while Defense Minister Benny Gantz received 12%.

Netanyahu may bask in the poll results, but the fact remains that he is head of the opposition, far removed from managing affairs of state. He is also embroiled in criminal proceedings, and there is no new election on the horizon. But politics can be fickle. When the coalition struggles to function, elections could be announced in a flash.

Meanwhile, Netanyahu is still trying to create an effective agenda at least in one area, where he has the advantage of public support: the Iranian nuclear program. Over the last few days, he has repeated his message again and again: By abandoning the nuclear agreement with Iran, Bennett and Lapid have put the country at risk.

On March 7 at the Likud Knesset faction’s weekly meeting, Netanyahu made a long speech lambasting the leaders of the current government. “The Iranians are fighting like lions, while Bennett, Lapid, and Gantz are surrendering like rabbits,” Netanyahu lashed out. “This miserable state of affairs is quite obvious.” Then he warned: “The elected leaders of the current government are coming to terms with a nuclear Iran, and in doing so, putting the state of Israel at risk.”

Netanyahu posts frequently on social media about the nuclear talks in Vienna, accusing Bennett and Lapid of abandoning Israel’s national interest. In one tweet, he included a video of Russia’s representative to the nuclear talks, Mikhail Ulyanov, saying, “Iran got more than it asked for.” Beside it, Netanyahu wrote, “This, first and foremost, is what Bennett and Lapid should be dealing with right now: Iran obtaining nuclear weapons to use against us.” The statement implied criticism of Bennett’s travels to other locations in Europe.

Other Knesset members from the Likud were also critical. Yoav Kisch, who is close to Netanyahu, tweeted, “I wish Bennett would play a role in bringing about a ceasefire. Its importance would be in saving human lives. From an Israeli perspective, however, if despite all this, a bad agreement with the Iranians is signed in Vienna, we have failed, and the consequences of this failure will last for generations.”

Bennett himself said little publicly in the past few days about the Iranian nuclear agreement or the talks in Vienna. Evidently, he feels more at ease acting as a mediator in an international crisis with the whole world watching. Since his meeting with Putin on March 5, the two men have had several additional conversations by phone, and Bennett has also spoken with Ukrainian President Volodymyr Zelenskyy. Bennett’s spokespeople make a point of updating the press about each conversation, hoping that Bennett’s new role will win him support. As noted, this hasn’t happened yet.

Over the last few days, the prime minister has managed to get considerable international coverage and recognition for his efforts. Yet, while the government is benefiting from this, its prospects are not especially bright.

The Knesset’s recess next week will be a big relief to the coalition, which is having such a hard time passing its legislation. But the harsh reality will not be gone, when the Knesset returns in May.

“The coalition is paralyzed,” one Knesset member from the Blue and White party confided to Al-Monitor on condition of anonymity. “On the other hand, the government is functioning well. The ministries are functioning, and the country is in a good state. Nevertheless, we can’t continue like this for any real length of time. The situation is disturbing.”