Prime Minister Yair Lapid finds himself in a difficult spot as reports insist the United States is closer to signing a nuclear deal with Iran. 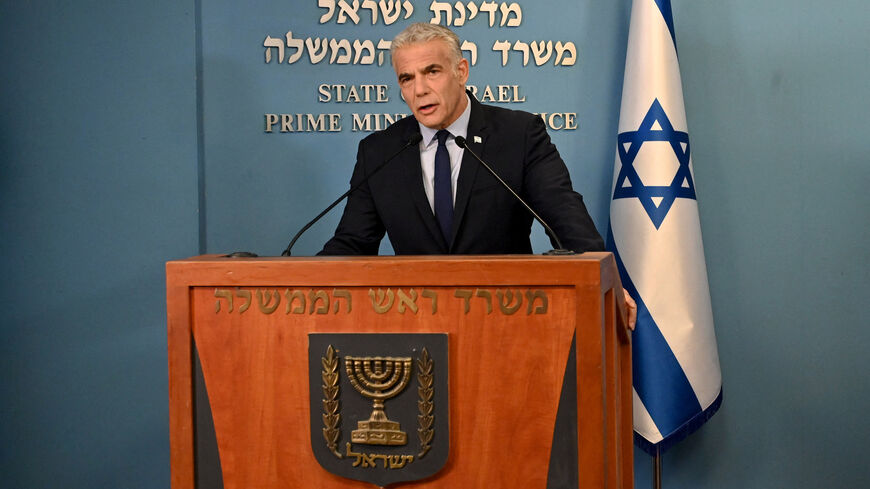 Israeli Prime Minister Yair Lapid speaks at a security briefing about Iran for the foreign press at the prime minister's office in Jerusalem on Aug. 24, 2022. - DEBBIE HILL/POOL/AFP via Getty Images

With negotiations over Iran’s nuclear program shifting into high gear over the past few days, they are more than just the top item on Israel’s security agenda. With the November 2022 election fast approaching, they have also become a tool for rival campaigns to attack each other.

Concerns have been growing in recent days in Jerusalem as reports insist that an agreement with Iran could be imminent. Repeated warnings by Israeli security experts and decision-makers only highlight the impression that Israel had little to say on the shaping of the draft that was presented to Tehran by the Europeans a few days ago.

In fact, almost all the major players, from Prime Minister Yair Lapid to opposition leader Benjamin Netanyahu, agree the forthcoming agreement is bad for Israel and that it will pave the way for Iran to develop a nuclear bomb. Inspecting the issue on the Israeli political level, the real questions are: Who is responsible for this, and who can be blamed?

As prime minister, in the public eyes, Lapid bears the ultimate responsibility for these developments, even if he has only been in office for three months. Channel 13 reported yesterday that efforts in the prime minister’s office to arrange a phone call between Lapid and US President Joe Biden have not been successful, at least as of yesterday. The White House responded that the president is on vacation.

Lapid always struggled with an unfavorable image when it comes to diplomatic security issues. Now he is facing an especially heavy issue in which he is expected to guide the ship of state as a transitional prime minister in the midst of an especially unstable period in Israeli politics, and during an election to boot.

Lapid has taken a hawkish position over the past few days. On Aug. 24, he told a group of foreign journalists, “We have made it clear to everyone: If a deal is signed, it does not obligate Israel. We will act to prevent Iran from becoming a nuclear state. We are not prepared to live with a nuclear threat above our heads from an extremist, violent Islamist regime. This will not happen, because we will not let it happen.”

While Lapid noted the importance of Israel’s alliance with the United States, he also appealed strongly to the leaders of the West, with whom he has been dialoguing in recent days. “I told them that these negotiations have reached the point where they must stop and say ‘Enough,’” noted Lapid.

Filling the position of the responsible and experienced adult is none other than Lapid’s rival within his own camp, the former chief of staff and current Defense Minister Benny Gantz. He flew to the United States to deliver a message to the Americans. The head of the new National Unity party is also running for prime minister, so it is important for him to appear experienced in such matters.

Gantz left for the United States early this morning. During his time in Washington and Florida, he is expected to meet with national security adviser Jake Sullivan and the commander of US Central Command, Gen. Michael Corella. On Saturday, Gantz will fly off to Japan for an official visit.

The main objective of his US visit is to clarify which articles will be included in the emerging agreement with Iran. Israel is not a participant in the negotiations, which are being conducted by the United States and Iran.

Shortly before he took off, Gantz posted on his Facebook page: “I am flying now to the United States for a very important visit. The purpose of this visit is to deliver a clear message regarding negotiations between the world powers and Iran over the nuclear agreement — an agreement that will not put Iran’s nuclear capabilities years back and will not limit what it can do for many long years ahead. It is an agreement that will harm regional security and world security. Iran’s race to a nuclear bomb must be pushed back significantly.”

This detailed and antagonistic response was apparently also intended for his own political needs. Gantz finds himself in the middle of an election campaign, so his target audience is the center-left bloc, especially those currently aligned with Lapid’s Yesh Atid party. Gantz’s goal is to win them over to his side.

Both Lapid and Gantz have official positions. Facing off against them is “Mr. Security” himself, former Prime Minister Benjamin Netanyahu. He turned the struggle against Iran’s nuclear program into a way of life. The first nuclear agreement with Iran was signed in July 2015, with US President Barack Obama sidelining Netanyahu. While Netanyahu attacked the agreement, there was nothing he could do to overturn it. On the other hand, he was also prime minister in 2018 when the United States withdrew from the agreement under then-President Donald Trump. Netanyahu was very pleased that he was able to sway Trump on the matter.

Today, Netanyahu’s rivals blamed him for the current situation, saying that it was under his watch that Iran came the closest it has ever been to building a nuclear bomb. Lapid, for instance, has been blaming Netanyahu that his speech to Congress in 2015, delivered without the agreement of Obama, pushed the White House to shut Israel out of the negotiations that powers were conducting with Iran.

Still, these attacks did not deter Netanyahu. Recognizing the potential of attacking an inexperienced Lapid, Netanyahu positioned himself at the top of the international agenda. In interviews with Fox News and Al Arabiya, he came out against the agreement.

“It is a dangerous agreement that will pave a golden road for Iran to acquire an arsenal of nuclear weapons. It is a threat to world peace. This agreement is worse than its predecessor,” he said in an interview with Fox News, clips of which he then posted on social media.

Netanyahu also released a statement with sharp criticism of the government’s treatment of the issue. “The terrible deal with Iran … casts a heavy shadow on our security and our future,” he said.

He then attacked Lapid and his predecessor, Naftali Bennett, arguing that Bennett made a commitment to Biden not to wage a public campaign against the agreement. From Netanyahu’s point of view, this approach gave up Israel’s operational freedom to respond militarily. For him, Israel made a crucial mistake by committing itself to reporting any operation against the nuclear agreement to the United States. “I never agreed to that, because I have a commitment to national security,” said Netanyahu.

The pressure Lapid is currently facing was somewhat revealed today when he adopted a different approach compared to his tone yesterday. Instead of signaling that Israel failed to convince the United States to avoid signing an agreement, Lapid highlighted today Israel’s alleged influence in reshaping the draft.

While reiterating that “the current deal is a bad deal,” Lapid said, “The Americans accepted a large part of the things that we wanted them to include in the drafts. It is a welcome change, and the dialogue with them is good and we will continue it.”

Still, Lapid did not go into details on the changes accepted by the United States. If an agreement without any significant Israeli input is signed during the current election campaign, it will serve Netanyahu’s interests with his target electorate.

The problem is that the current election, like the elections before it, has been unable to transcend one question: Netanyahu, yes or no? Netanyahu’s opponents won’t be swayed by his arguments. The only person who will benefit from them is Gantz in his fight with Lapid.