Netanyahu’s ‘Iran doctrine’ sidelines everything else

Prime Minister Benjamin Netanyahu managed to impose the Iranian threat at the center of the security agenda, sidelining other significant issues and even determining the rhetoric of his rivals. 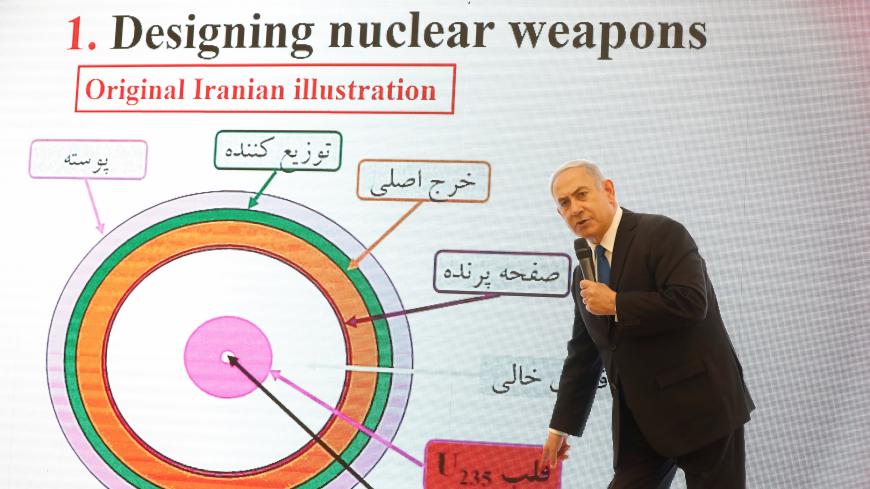 March 2019 will mark a decade since Prime Minister Benjamin Netanyahu’s return to power, and a decade of him pushing his agenda of placing the Iranian nuclear program at the top of security threats to the State of Israel. Even if Netanyahu is not prime minister in March 2019, it’s already clear that he has succeeded in determining the Iranian nuclear program as the critical item in Israel’s diplomatic-security policy. This was a long process that saw peaks and valleys. It started with preparations for an Israeli strike on Iran in 2009-2012, which later expired with the signing of the 2015 nuclear deal under the Obama administration. In many respects, the nuclear deal was considered a failure for Netanyahu, as his political rivals contended that the terrible deal (from Netanyahu’s point of view) was the result of his shaky relationship with then US President Barack Obama.

On May 8, US President Donald Trump delivered an incredible turnaround to the Iran-Netanyahu saga, with his dramatic withdrawal from the deal and the renewal of the sanctions regime. Netanyahu could not have hoped for a better scenario. He marked himself as the victor, only a week after his political rivals, led by Yesh Atid Chairman Yair Lapid, accused him of gravely damaging the work of the Mossad by presenting on April 30 the Iranian documents Mossad captured from Iran.

It would not be an overstatement to define the last decade of Israel’s foreign and security policy as the Iranian decade and to say that Netanyahu’s Iran doctrine now rules the day. What’s fascinating in this process is not only Netanyahu’s achievement in swaying Trump to fully adopt his Iran doctrine, but also how the entire Israeli political establishment, including Netanyahu’s rivals, was drawn in to an agenda that sees Iran as the supreme threat.

Without discounting the achievement of the United States pulling out of the Iran nuclear deal, the State of Israel in its 70th year is a military power that can withstand even an Iranian nuclear threat. At the same time, it’s also a nation that disturbingly represses any deliberation on the conflict with the Palestinians; the Gaza Strip, for instance, is a barrel of gunpowder that could blow up at any moment. Even more disturbing is that the leaders of the center left allow Netanyahu, for their own electoral reasons, to singlehandedly set the tone of internal discourse in Israel. True, it’s hard to steal the limelight from a prime minister who holds in his hands all the means to set policy, certainly when it comes to a personality like Netanyahu. Despite that, it could be expected that those who see themselves as successors to Netanyahu and declare that they intend to set a different policy, act differently. But in most cases, they actually fall in line with him.

It’s highly doubtful that Israeli citizens, including among the center left, would know how to answer a question like, “How are Yair Lapid’s and Labor Party head Avi Gabbay’s worldviews regarding the Palestinians different from Netanyahu’s?” The reason for this is Lapid’s and Gabbay’s public attitudes. Even if both of them occasionally declare their support for the two-state idea and for reaching an agreement with the Palestinians (Netanyahu also declared so in his 2009 Bar-Ilan speech), they don’t give it any weight in their agendas.

Gabbay, for instance, spearheaded a decision at his party’s conference at the end of April that the Labor Party is committed to the two-state solution. The move stemmed from Gabbay’s efforts to bring back those voters who fled when he tried to adopt a diplomatic-security agenda more suited to the Likud. In actuality, he didn’t continue to leverage this decision and instead doubled down on the campaign against corruption.

In order to understand the depth of the process by which Netanyahu has established the Iranian nuclear program as Israel’s primary threat, we should return to the days before Trump’s announcement. Last week, Lapid tried to challenge Netanyahu when he launched a bold campaign that accused the prime minister of damaging the country’s security by revealing the Iranian documents that the Mossad secured. The chairman of Yesh Atid understood that he has to challenge Netanyahu on security if he wishes to be taken seriously as a candidate for prime minister, and he chose to use the Iranian issue as a platform. Lapid even cautioned that the cancellation of the nuclear deal is problematic.

On May 8, following Trump’s announcement, which included praise for Netanyahu’s presentation, Lapid toned down his rhetoric. He praised Trump for his strong stand alongside Israel and added on Twitter that now “we have to enlist all our diplomatic capacities to ensure that the Europeans, the Russians and the Chinese join the effort to prevent Iran from resuming its plan of developing nuclear weapons. … Just as in the past we worked alongside the prime minister to oppose the bad nuclear deal, this time also we will put aside political considerations of coalition/opposition and work to renew sanctions on Iran.”

Not a word about Netanyahu’s dangerous policy, which he warned about only a few days earlier. Not a word about Israel’s no-less-dramatic diplomatic-security challenges on the Palestinian and regional fronts.

A few hours before Trump’s declaration, several leaders of the political establishment who see themselves as Netanyahu’s successors appeared at the annual Herzliya Conference — an important forum on policy and strategic issues. They of course devoted time to the nuclear deal. Without exception, chairman of Kulanu and Finance Minister Moshe Kahlon, chairman of HaBayit HaYehudi and Education Minister Naftali Bennett and chairman of the Knesset Yuli Edelstein all sided with the withdrawal from the agreement.

Bennett estimated that the ayatollah regime is on borrowed time and is bound to collapse, and he threatened Hezbollah Secretary-General Hassan Nasrallah by saying Nasrallah would lose Lebanon if the Hezbollah leader starts a war against Israel. Kahlon was the only one that day who, along with remarks on the bad deal between Iran and the powers, spoke about the Palestinians, but even he didn’t give the issue priority and only said that we should wait for Trump’s plan.

On the morning after Trump’s announcement and the alleged Israeli strike in Syria, the political establishment almost entirely fell in line with Netanyahu and the United States’ withdrawal from the agreement, except for the Meretz Party. Likud ministers, including Yisrael Katz, Zeev Elkin, Yariv Levin and Ofer Akunis backed and basked in Netanyahu’s latest achievements. In any case, they have already declared that they wouldn’t run against him, so it’s no wonder that they fully embrace his security doctrine.