Gaza at Christmas: a bleak outlook 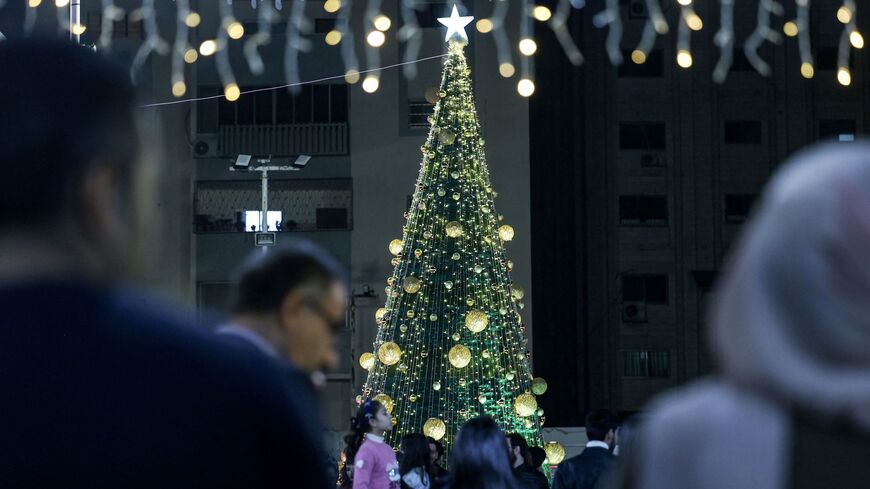 Palestinian Christians, also accompanied by Muslims, light the Christmas tree in the courtyard of the YMCA Gaza in Gaza City on Dec. 10, 2021. - MOHAMMED ABED/AFP via Getty Images

The May 2021 Israel-Hamas war and the ongoing COVID-19 pandemic has compounded Gaza’s already awful economic conditions.

A World Bank study in November 2021 reports that Gaza, with over 2 million residents, has undergone "deindustrialization." Its unemployment rate is 45 percent, and 59 percent of the population lives in poverty. "Gaza’s citizens suffer from poor electricity and water-sewerage availability, conflict-related psychological trauma, and limited movement," the report finds.

The YMCA in Gaza, for the third year in a row, has lit a Christmas tree to bring some reprieve and happiness to Gaza’s children. Ruwaida Amer and Joe Snell have the story and the video.

There are only approximately 1,000 Christians among Gaza’s 2 million citizens, but their impact on society and economy is substantial.

"Many Christian institutions have played a strong role in Gaza’s economy, such as the Catholic Relief Services (CRS), which offers temporary employment projects and support," writes Hadeel El Gerbawi. "The Middle East Council of Churches Department of Service for Palestinian Refugees has been offering training sessions and professional training diplomas for years."

But conditions for Christians, as for all Gazans, are difficult. Last year, the Hamas-run Ministry of Endowments in the Gaza Strip discouraged Muslims from participating in Christmas celebrations, as Entsar Abu Jahal writes.

This year, due to the COVID-19 pandemic, celebrations in the Gaza Strip will be limited to church prayers and lighting the tree. The good news is that Israel has eased some travel restrictions, so about half of the Gaza’s Christians will be able to enter Israel and the West Bank for the holiday.

Most historical accounts indicate no Jewish presence in Gaza after 1929, when British soldiers forced all Gaza Jews to leave because they said they could not be protected from Arab rioters.

But a one-acre area of a few buildings, known to a few as the Jewish quarter, may have been occupied by a Jewish family until the 1960s, as Hadeel El Gerbawi reports.

"Few of this quarter’s residents know that it was called the Jewish Quarter," she writes. "These Jews reportedly worked in agriculture and trade at a time when the community was not divided by political and religious differences."

Gaza gets a new wall

Israel inaugurated an upgraded security wall on the Gaza border this month, in response to what is said is the threat posed by Hamas’s tunnel network

"The galvanized steel wall weighs about 20,000 tons and has a height of about 6 meters," Mail Abu Hasaneen writes. "It stretches both above and under the ground over 65 kilometers along the border from the new sea barrier near Zikim beach in the north to Kerem Shalom crossing in the south."

"'We Want to Live' is a popular movement that began in March 2019 with social media calls for peaceful demonstrations over the difficult economic conditions and the high unemployment rates in Gaza," writes Rasha Abou Jalal. "The demonstrations, which evolved into strikes, mass civil disobedience and camping on the streets of Gaza, were heavily repressed by Hamas security forces, who arrested dozens of demonstrators."

Meanwhile, the armed wings of Gaza-based Hamas and Palestinian Islamic Jihad (PIJ) appear to be expanding into the other Palestinian-administered territory of the West Bank, with both groups claiming responsibility for operations targeting and killing Israeli Jewish settlers in recent weeks.

"The November Hamas operation in Jerusalem and the recent PIJ operation near Nablus are two indicators of the possibility of the return of organized operations to the West Bank, which may lead to a deterioration of the situation on the Gaza front, as Israel seeks to unify the truce file," writes Ahmed Melhem.

"Black Palestinian artists in the Gaza Strip still encounter racism and discrimination," reports Taghrid Ali. "They face harsh mockery for the color of their skin and curly hair, and many Palestinians refuse to marry them."

"Some Black artists in Gaza have been experiencing racism since their childhood. Even as adults, when they stand on stage to perform the traditional Bedouin songs known as 'dahiya,' they receive negative comments and insults in regard to the color of their skin," she writes.