Farmers in a second province in Iran protest the water crisis in their region. 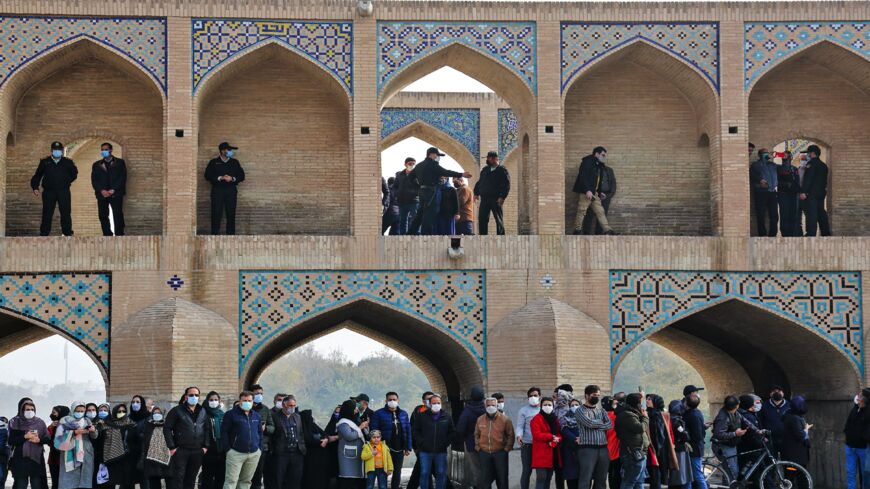 Iranians gather during a protest against a water shortage, in the central city of Isfahan, on Nov. 19, 2021. The massive protest, which drew in farmers and others from across Isfahan province, was the biggest since demonstrations over the water crisis started on Nov. 9. - FATMEH NASR/ISNA/AFP via Getty Image

Just days after thousands of Iranians took to the streets in Isfahan to protest water policies and the government's inability to address the water shortages, Iranians in an adjacent province took the streets over the same cause. For back-to-back days, hundreds of residents of Chaharmahal and Bakhtiari province gathered in the provincial capital Khahrekord to protest water scarcity.

According to hard-line Tasnim News Agency, nearly half of the million residents of Chaharmahal and Bakhtiari province struggle to obtain consistent potable water. According to provincial officials, nearly 200 villages in the province receive their potable water through tankers that are delivered to their areas. The region also struggles to supply water for agriculture, which employs most residents of the province.

The water shortages are linked to both the drought affecting the area and water mismanagement. Tasnim blamed the Hassan Rouhani administration for the poor planning, though Iran’s water planning shortages have been consistently subpar for multiple administrations.

Two high-cost and ambitious projects that have been discussed by Iranian administrations are the transfer of water from both the Caspian Sea in the north and water from the Persian Gulf in the south. The projects have raised both economic and environmental concerns. Economists believe bringing desalinized water to the southern provinces in the Persian Gulf would cost too much and is not sustainable. Environmentalists believe that the underground or even above-ground pipes needed for such an endeavor would lead to deforestation and hurt the biodiversity of the region.

Solving the water shortages of the country is now on the shoulders of President Ebrahim Raisi. At a Cabinet meeting Nov. 21, he addressed the water crisis in the country, saying, “Addressing the water shortages is not limited to the Ministry of Energy. All institutions, through cooperation and consensus, must find the solution to the drought.” Raisi said that the problems with shortages in the country have “various dimensions” and urged a comprehensive approach. However, he did not offer specific solutions or plans but rather called on the country’s ministries and institutions to work together to come up with one.

Iran and the world powers are scheduled to restart the nuclear talks next week. Saeed Khatibzadeh, spokesman for Iran’s Foreign Ministry, said the focus of the talks will be the removal of sanctions that were applied by the US illegally. In response to comments made by Nayef al Hajraf, secretary-general of the Gulf Cooperation Council, that a deal will not take into consideration Arab countries in the Persian Gulf, Khatibzadeh said that “Iran’s agenda on the Vienna talks is clear and Iran’s agenda is clear,” meaning that they will not conflate the two issues in the upcoming talks.