During the pre-dawn raid in the city of Esfahan, baton-wielding security forces set protest tents on fire and pushed farmers out of the dried river basin, the site of more than two weeks of public demonstrations. 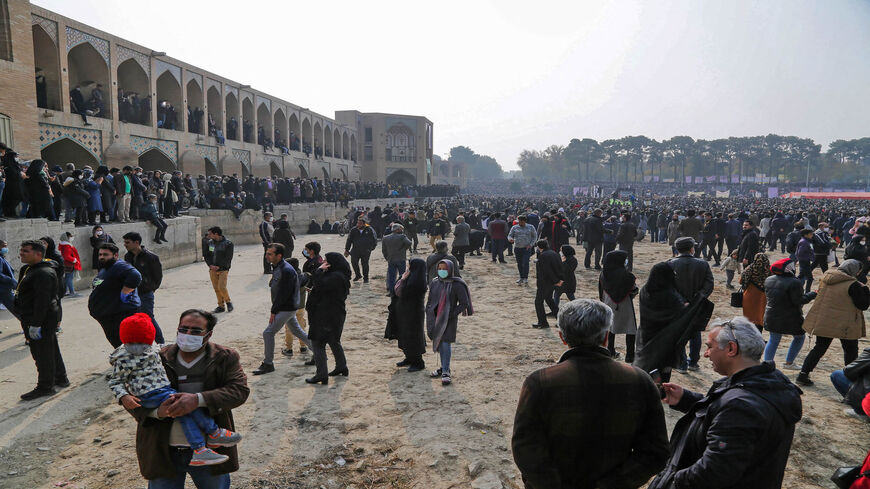 Iranians gather during a protest to voice their anger after their province's lifeblood river dried up due to drought and diversion, in the central city of Esfahan, Iran, Nov. 19, 2021. - Fatmeh Nasr/ISNA/AFP via Getty Images

Protesters who have been camped out across the drained basin of River Zayandeh Rood in the central Iranian city of Esfahan woke up to a pre-dawn raid by riot police Nov. 25. Videos on social media were replete with chaotic scenes as tents were set on fire, with police teargassing the protesters to put an end to their two-week sit-in.

In an attempt to highlight the plight of excruciating water shortages and express their frustration with mismanagement of water resources, the protesters had chosen the riverbed — the bloodline of local farming — which has now turned into an apocalyptic barren land.

Fars News Agency affiliated with the Islamic Revolutionary Guard Corps (IRGC) reported that the protesting farmers had already issued a statement a day before, officially declaring an end to their protests before setting a deadline for the authorities to address their demands. The hard-line outlet blamed the tension on "thugs" and "opportunist elements," who had been trying to "divert the protests" but were arrested after "police acted with promptness."

Hours into the raid, Interior Minister Hossein Dehghan was attending a ceremony inaugurating the governor of the adjacent province of Chaharmahal and Bakhtiari, which happened to be the site of similar water-related rallies last week.

"Let's stay vigilant [to make sure] the enemy will not take advantage of our country's water shortage problem," declared the minister, who is also a former IRGC commander. Iranian authorities have traditionally blamed public protests on outside "enemies," whose long-term plan is to secure an "overthrow" of the Islamic Republic. The narrative has fed plainclothes loyalists with a free pass and enough justification to join the IRGC and police forces in their violent crackdown on dissent, boosted by media campaigns that have demonized protesters as "mercenaries" and in extreme cases have branded them as "terrorists."

Back in July, the southwestern province of Khuzestan witnessed yet graver flare-up of tensions sparked by severe water shortages in the oil-rich area. Activists say at least three protesters were killed by security forces in the clampdown as hundreds more were sent behind bars.

The ongoing water crisis in Iran has been linked to multiple causes, ranging from drought and global warming to unregulated dam construction. Yet decadeslong corruption and failing projects, such as water transfer tunnels, appear to be the main culprit and the shared complaint among the majority of the protesters. Facing those complaints from Esfahan and elsewhere, officials in the administration of hard-line President Ebrahim Raisi have promised urgent action.

While the immediate fulfillment of such promises is taken with a grain of salt due to the multidimensional nature of Iran's water crisis, the government for now might have to brace for a spillover of the protests. On the very day the protests were crushed in Esfahan, calls were already circulating across social media for a Friday mass gathering in the western province of Lorestan, which has seen its agriculture inch closer to the edge of bankruptcy as its once abundant water resources are now shrinking with alarming pace.