The demonstrations in Isfahan follow widespread protests over water shortages in the oil-rich southwestern Khuzestan province in July. 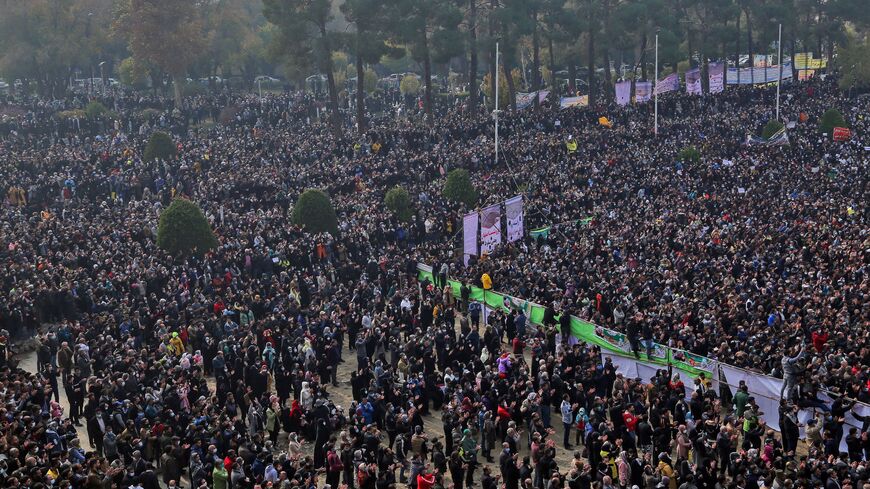 Iranians gather during a protest to voice their anger after their province's lifeblood river dried up by drought and diversion in the central city of Isfahan, Nov. 19, 2021. - FATMEH NASR/ISNA/AFP via Getty Images

Thousands of Iranians gathered in the central city of Isfahan on Friday to demand the government address the drying up of the region’s most important river, state TV reported.

In videos posted to social media, demonstrators are seen making their way through a dry riverbed on their way to the centuries-old Khaju Bridge over the Zayandeh Rood River. “There will be unrest in Isfahan if the river doesn't flow," the protesters reportedly chanted this week.

“Thousands of people from Isfahan, farmers from the east and west of the province, have gathered in the dry Zayandeh Rood riverbed with one key demand: Let the river run,” a state television journalist in Isfahan reported, according to Agence France-Presse.

“For years, there has been no will to resolve the problems of this important river,” the journalist added.

The protests in Isfahan reportedly started on Nov. 8 and have grown to include people sleeping in tents they have pitched along the river bed. The demonstrators attribute the city’s depleted water resources not only to the climate change-induced drought conditions, but also to poor water management by Iranian authorities, including the water’s diversion to a neighboring province.

Iranian First Vice President Mohammad Mokhber said that he ordered the minister of energy and agriculture to find a solution. Iranian Energy Minister Ali Akbar Mehrabian told the city’s farmers he was sorry and that he hopes Iran can “fill these gaps in the coming months.”

Iranian officials have acknowledged the impact of climate change, but say they will join the Paris climate accord only after international sanctions are lifted. Iran’s burning of natural gas has made it the world’s seventh-largest emitter of carbon dioxide, says the Union of Concerned Scientists.

Water scarcity isn’t limited to central Iran. Protests erupted in July over chronic water shortages in the oil-rich southwestern Khuzestan province and later spread to Tehran and other cities. Iran’s security forces responded by firing live ammunition at the crowds, killing a number of protesters.

The latest demonstrations in Isfahan come as Iran marks the two-year anniversary of nationwide anti-government protests that were prompted by a sudden increase in gasoline prices. The violent state response to the November 2019 protests reportedly left hundreds dead.