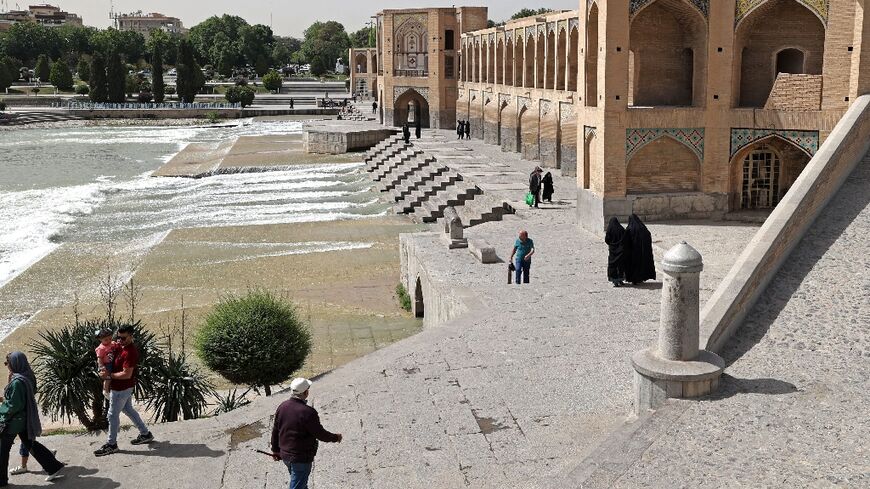 Iranians gather on the iconic Khaju Bridge over the Zayandeh Rud river in Isfahan, on May 16, 2022 - ATTA KENARE
by Karim Abou Merhi and Ahmad Parhizi
May 24, 2022 — Isfahan (Iran) (AFP)

The famed river bridges of the Iranian city of Isfahan are a beloved tourist draw -- but much of the time their stone arches span just sand and rocks, not water.

Drought and upstream water diversions have seen the Zayandeh Rood, "fertile river" in Persian, run dry since 2000, with only rare exceptions.

Sitting on a quay with two friends, 60-year-old Jalal Mirahmadi gazed with melancholy at the riverbed, which became the site of a farmers' protest late last year.

"When I was a child, the water flowed under the arches of the bridge and sometimes overflowed to spill into the surrounding streets," he sighed.

The river runs nearly 400 kilometres (250 miles) from the Zagros Mountains in the west to Lake Gavkhouni in the east, making it the longest waterway in central Iran. 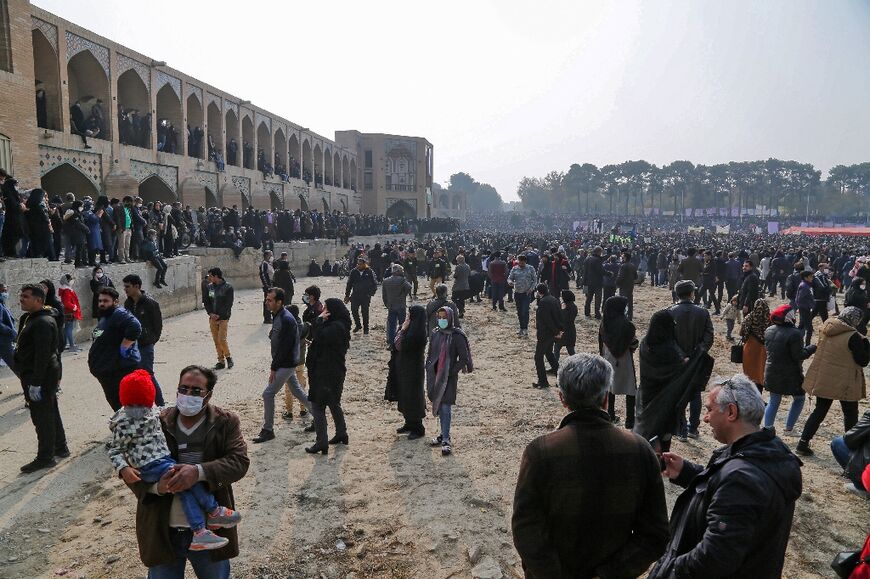 On its way through Isfahan, it meanders under several beautifully crafted bridges from the 17th century, the city's golden age when it was the Persian capital.

"When the water of Zayandeh Rood flows, the bridges have a special appearance and beauty," said Ali Mohammad Fassihi of the Ministry of Heritage and Tourism.

"These historic bridges are meaningless without water."

Largely arid Iran, like other nearby countries, has suffered chronic dry spells and heat waves for years, which are expected to worsen with climate change. 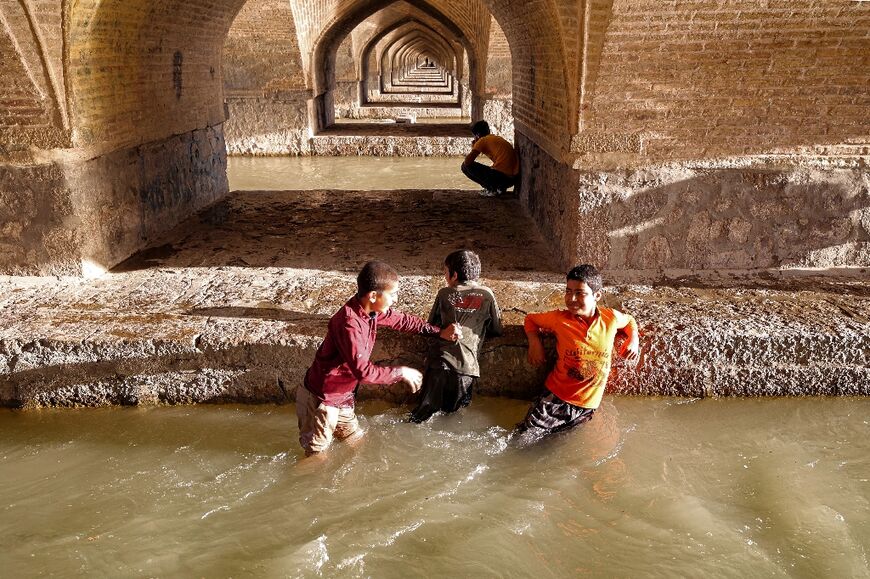 Iran is sometimes hit by summertime blackouts when the blistering heat drives up air conditioner use while low rainfall reduces the water reservoirs of hydro-electric dams.

The reduced flow of the Zayandeh Rood, however, is also man-made because much of its water has been diverted to supply neighbouring Yazd province.

Last November, tens of thousands of people, including farmers, gathered in the dry riverbed to complain about the drought and blame officials for diverting water.

The municipality later launched an awareness campaign on the fate of the river, with several signs erected in Isfahan, the country's third-largest city with two million people.

Young people in the city say they are used to only seeing the river's dry bed.

High school student Amir, 18, said he rarely goes there because it "is no longer pleasant without water".

"Most of my memories and those of my generation are associated with the dryness of the river," he lamented. 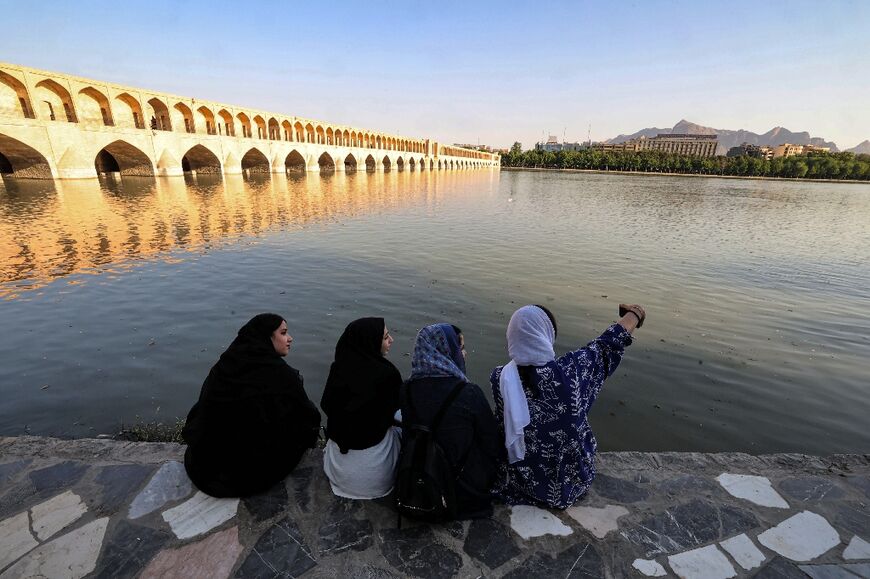 From time to time, authorities briefly open the upstream dam's floodgates to irrigate wheat fields east of Isfahan -- to the delight of thousands who quickly flock to the river.

This happened in mid-May when locals and tourists rushed to the waterway to capture the ephemeral views with their eyes and with selfies.

Under the shade of trees on the banks, families drank tea and smoked shisha. Some strolled and others pedalled swan-shaped boats, which were back in use after baking in the dust.

"I hadn't been to Isfahan for 10 years because there were few tourists due to the drought in Zayandeh Rood," he said.

He had only planned to stay for a week or two, but said that when the dams were opened, "I extended my stay".

Mahnaz, a 27-year-old art student holding her camera, said she was delighted to capture the river's beauty.

"I didn't have good photos of the bridge's reflection in the river because it's been dry since I learnt photography," he said. 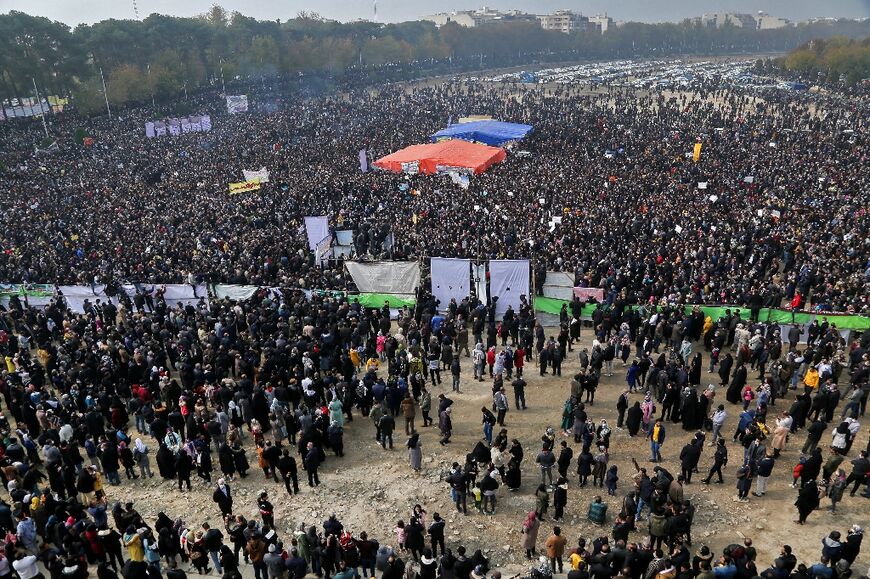 Mirahmadi, the 60-year-old man, looked on at visitors to the river with mixed feelings.

"Do you see this crowd today?" he said. "In a few days, when there is no more water in the river, you will only see old men like us. And we will come just to remember."

The floodgates had been closed again and already the change was obvious: water flowed only under two arches of the Khajou Bridge, which is known for its decoration and its steps descending into the current.

"Zayandeh Rood is the meeting place for all the people of Isfahan," said Borna Moussavi, who campaigns for the preservation of the river and the heritage of Isfahan.

"When they are happy, they come to this river and its bridges to celebrate. And if they are sad, they come here to calm down." 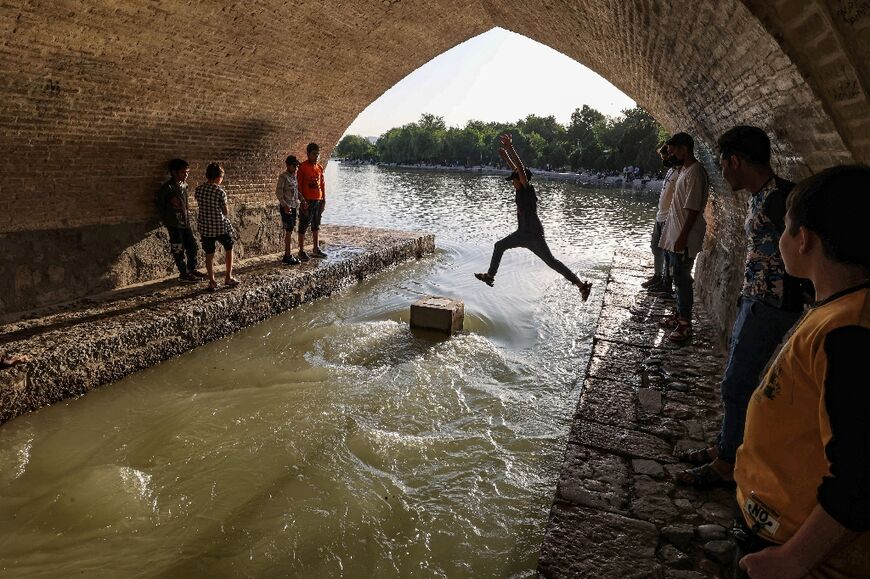 For him, the complete disappearance of the river would be akin to the loss of a loved one.

"Zayandeh Rood is like a mother to us," Moussavi said.

"If there is no river, Isfahan will become a desert, and in four or five years everyone will abandon the city."